The Champions League final .. Klopp nominates Real Madrid and Ancelotti believes that the loss from Liverpool is the best memory

Liverpool coach Jurgen Klopp said that Real Madrid is the favorite to win the Champions League final, while the Italian coach, Carlo Ancelotti, confirmed that his team's history is the reason for reaching the final. 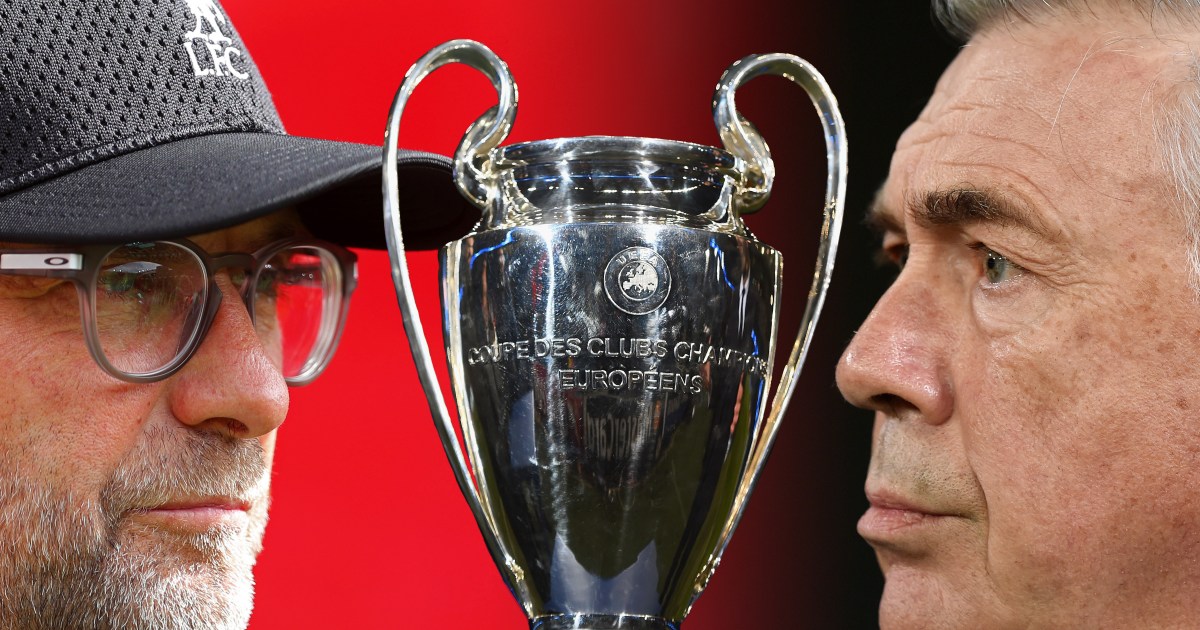 The German coach of Liverpool, Jurgen Klopp, said that Real Madrid is the favorite to win the Champions League final today, Saturday, while the Italian coach of the Royal Club, Carlo Ancelotti, confirmed that the history of his team is the reason for reaching the final.

Real Madrid is attending the final for the fifth time in the last 9 seasons, after it managed to reverse its delay in its matches in the previous three playoffs.

When asked who he sees as the most prominent candidate to win the match, Klopp said, "If you look at the history of the two clubs and the way Real celebrated their return in the result, I would say they are the candidates."

Liverpool has not lost since last March, and has lost only 3 games this season and has already won two local titles, despite missing the chance to win the Premier League title on the last day of the season, while Real managed to win the Spanish League title a month before the end.

"I think we are in a great moment and we will do everything we can to win on Saturday, but sometimes your best is not enough to succeed," Ancelotti told a news conference on Friday. "Football is about intangible things that you can't control sometimes. My team deserved to reach the final." But winning it isn't about what I did before, it's about what happens on the pitch during the big game."

"We have to show our capabilities in this match. The collective commitment, the individual quality and the impact that the substitutes make in the important moments. The team that succeeds in exploiting and adapting its strengths to the circumstances of the match will win."

Carlo Ancelotti expressed his belief that the team's rich history was what prompted his team to qualify for another Champions League final.

The question remains about Real's ability to repeat the impressive results it achieved on its way to the final when it overturned its delay to win in its confrontations with Paris Saint-Germain, Chelsea and Manchester City.

"The history of this club has pushed us to the final," he said. "To win the final you have to deserve it. We have to show our quality, like we've done all season. The overall commitment has been great."

Liverpool stands as an obstacle on Real's way to crowning its 14th Champions League title.

The Real has not lost any final match of the tournament since losing to Liverpool in the 1981 final in Paris.

Ancelotti won 3 of the 4 finals he played in the Champions League, and the only loss was against Liverpool when the English club came from behind against Milan and won on penalties in 2005.

However, Ancelotti, 62, described the loss, with Milan leading 3-0 in the first half, as the best European final he had seen.

"Dreams can't be controlled," he said. "I have good memories of the finals I went to. My favorite final was in 2005 when we lost to Liverpool. Anything can happen in the end and you have to be prepared. We have prepared well and we will give our best. I don't know if that's Enough, because football has something you can't control."

Saturday's match will give Liverpool an opportunity to avenge their loss to Real Madrid in the 2018 final, and Ancelotti does not believe that Real Madrid will have a physical advantage, despite having had time to rest the key players after winning the La Liga title early.

He pointed out that Real Madrid, under his leadership, in 2014 reached the final with many injured players and was able to beat local rivals Atletico Madrid.

"Liverpool will play a strong match," he said. "We have to be ready to respond at the highest level."