Despite a clear domination in the game of Liverpool, Real Madrid won the Champions League on Saturday at the Stade de France. An evening marked by incidents outside the enclosure of the match. 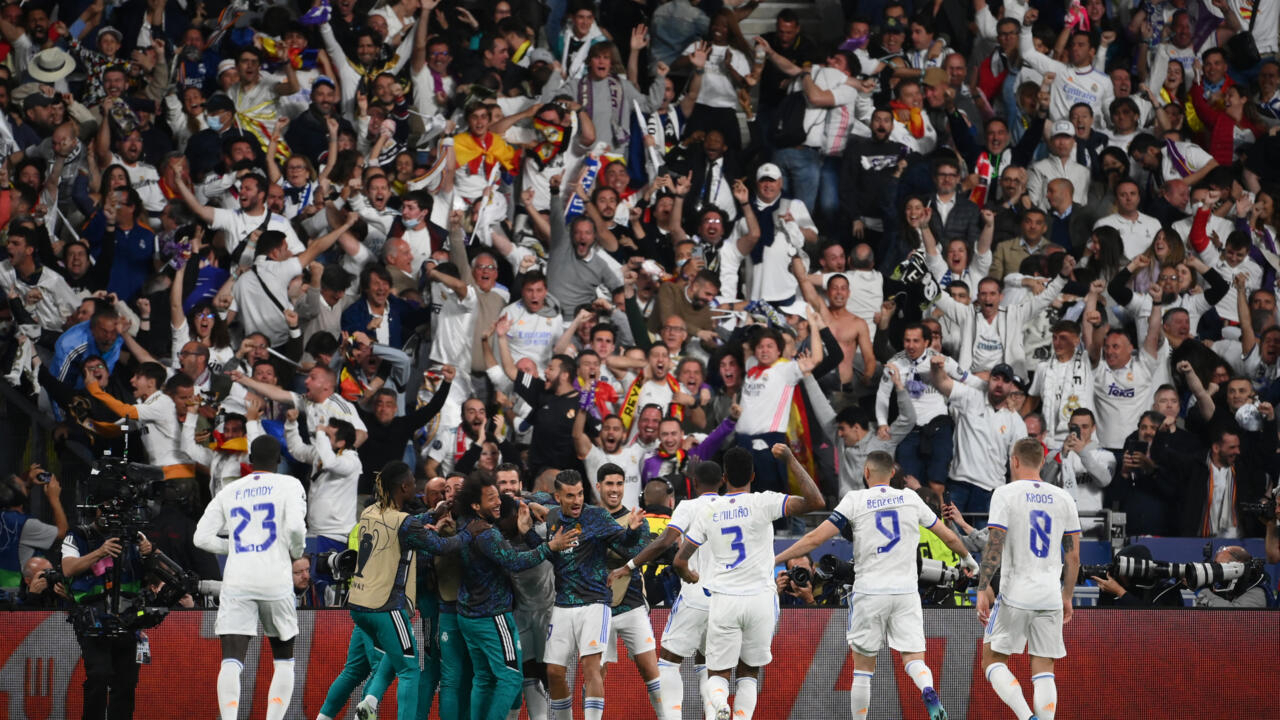 This is the word that all Real Madrid fans will have learned after their victory on Saturday May 28 in the Champions League final against Liverpool.

A lively start to the final outside the stadium

A final that started in confusion.

The Reds fans had stormed the bars around the Stade de France very early on.

The English certainly wanted to be sure to have time to down a few pints before the prefectural decree took effect at 6 p.m. and deprived them of alcohol.

Madrid fans arrived a bit later but not without a bang.

The chants "Hala Madrid" came out of the nearby Stade France metro station each time a new train came to carry a white wave.

A few insults for Kylian Mbappé were also flying.

The Spanish fans take advantage of their visit to his native department to proclaim how little they appreciated the rabbit of the French prodigy, who preferred to stay at PSG at the last moment.

Faced with this massive movement of club fans, a total of 6,800 police, gendarmes and firefighters were mobilized to ensure security.

However, the device turned out to be insufficient.

Unprecedentedly, the kick-off of the meeting was officially delayed by fifteen minutes "due to the late arrival of the supporters".

Supporters tried to force a first filter installed around the stadium, but access to the enclosure remained "tight", according to the communication from the Paris police headquarters (PP).

The two teams therefore spent a little more time than expected in the locker room and even had the honor of a second warm-up.

When football was able to resume its rights thirty-six minutes after the scheduled time, the start of the match was shy.

A free kick from Alexander-Arnold for Liverpool is easily returned by the merengue defense (2nd).

On the Madrid side, we try to go through the sides with Vinicius Jr (5th) and Valverde (7th).

Liverpool ends up waking up the stadium.

Trent Alexander-Arnold infiltrates the area on the right side and crosses back.

At the reception, Mohamed Salah resumes in imbalance and forces Thibaut Courtois to a parry on the ground.

In the aftermath, Thiago Alcantara tries a shot from distance but the Belgian goalkeeper is on the trajectory (16th).

Perhaps sounded by the false start, Real Madrid can not do it.

They are suffocated by a Liverpool which imposes its law in the middle of the field and dictates the tempo of the match.

Benzema is forced to lead by example by going down in his 20 meters to recover the ball.

This does not prevent Salah from testing Courtois again on a cross from Trent Alexander-Arnold from the penalty spot (36th).

Then his Senegalese partner Sadio Mané manages to turn around to send a powerful shot that the Madrid goalkeeper diverts for a corner (40th).

Real Madrid are struggling but their European campaign has proven that all it takes is a flash from captain Benzema to be lethal.

Moreover, the French thinks to open the score.

Found on a long deep ball, he eliminates the last defender with a hook and tries to slip Federico Valverde back.

Alisson and Ibrahima Konaté get in the way and the ball comes back to Benzema, who pushes deep.

An offside, confirmed by the VAR to the French referee Clément Turpin, takes away the goal (43rd).

After kicking off the first period, Trent Alexander-Arnold kicks off the second.

The English international crosses at the far post towards Luis Diaz, who is very close to resuming with a diving header in the area but is ultimately too fair (47th).

Real Madrid are better in place in the second period and leave very little space for their opponents.

Liverpool have the ball but fail to unbalance the opposing block.

The light comes from Vinicius

The people of Madrid turn their backs against the red waves.

Then, Federico Valverde brings the ball up on the right side and crosses hard in front of the goal.

At the far post, Vinicius is forgotten by the defense and only pushed the ball deep (59th, 1-0).

Unable to take advantage of its highlights, Liverpool is therefore punished.

However, Jürgen Klopp's men do not admit defeat.

Salah wraps a shot from the left side that Courtois repels (64th).

Rebelote a few minutes later, the Egyptian finds the Belgian goalkeeper on his way (68th).

Real Madrid misses the opportunity to make the break.

On a free kick on the right side, Toni Kroos finds Casemiro, forgotten at the far post.

But the delivery of the Brazilian does not find any teammate (75th).

The end of the match takes place at 100 per hour.

Nothing will help, the White House is closed tonight.