The 14th edition of the Professional League concludes today .. "Al-Ain is the leader"

Today, the curtain falls on the 14th edition of the UAE Professional Football League “ADNOC Professional League” with the meeting of the “last 26” round, which will witness the crowning of the Al Ain team with the title of the competition, after the confrontation that will bring it together at 9:00 pm today at Hazza Bin Zayed Stadium in front of its guest to talk nonsense 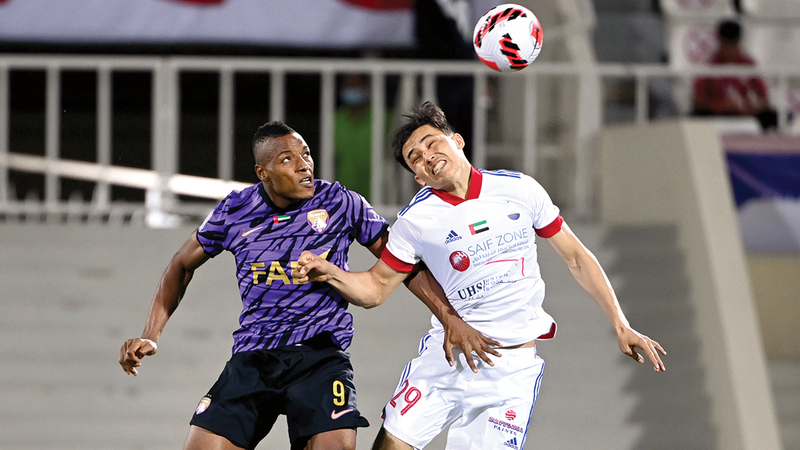 The 14th edition of the Professional League concludes today .. "Al-Ain is the leader"

The first round match ended with Sharjah winning 2-0.

Today, the curtain falls on the 14th edition of the UAE Professional Football League “ADNOC Professional League” with the meeting of the “last 26” round, which will witness the crowning of the Al Ain team with the title of the competition, after the confrontation that will bring it together at 9:00 pm today at Hazza Bin Zayed Stadium in front of its guest Sharjah, in a meeting he is playing as a result, after he had secured the title three rounds ago, and for the 14th time in the club's history, a "record".

In the rest of the matches, Khorfakkan “28 points” at 6:15 pm will receive its guest Shabab Al-Ahly “39 points” at Saqr bin Muhammad Al Qasimi Stadium, and in turn, Ittihad Kalba comes out “27 points” to be a guest of Baniyas “30 points” in Al Shamkha in At 6:15, while the Emirates team “10 points” bids farewell to the professional league clubs against Ajman “32 points” at 9:00 pm after its official relegation.

An official source told "Emirates Today" that the team's coronation ceremony will be limited to the delivery of medals and the championship shield, in mourning for the late His Highness Sheikh Khalifa bin Zayed Al Nahyan, may God have mercy on him.

The source added that the international players in Al Ain team, Khaled Issa, Bandar Al Ahbabi, Yahya Nader and Caio Canedo, will have the opportunity to watch the match from the stands, provided that they participate in the coronation ceremonies, while the Togolese international duo Laba Kodjo and Moroccan Sofiane Rahimi will be in the coach's squad to play the match.

Today's match is important in Al Ain's bid to bid farewell to fans in the best way, by achieving victory in the face of Sharjah, who deprived them of the opportunity to win the title without defeat, as the "leader" lost in the first leg between the two teams with two clean goals.

Al Ain has an opportunity to enhance its record score in the number of points in one season, as it currently has 64 points, while the largest number of points it reached was 62, when it won the league title in the 2012-2013 season, and if the team succeeds in winning, it will reach Point is 67 as the highest number of points collected by the team, but it will be one point behind Al Jazira, the record holder, as the team with the most points in one season by winning the title in the 2016-2017 season, with a score of 68 points.

In terms of individual numbers, the Togolese international striker, Laba Kodjo, is looking for the title of top scorer in the competition by increasing his balance of goals, which currently stands at 26 goals, 12 goals ahead of his opponent, the Brazilian striker Joao Pedro, who has 14 goals.

And the equality with Zoran The Ukrainian coach of Al-Ain team, Sergey Rebrov, lived exceptional moments during the season with the “leader”, to write his name in a short list of coaches who succeeded in achieving the league title in their first year with the team, and he is also among the few who managed to crown two titles. In one season, the coach confirms that he was and still is the most appropriate option to lead the team in the coming seasons, knowing that his contract with the team expires at the end of this month, and has not been renewed so far.

Rebrov won the ADNOC Professional League title, the 14th time in the club's history, in addition to the League Cup for the second time, and after waiting 13 years since his first title in 2008/2009, he also monopolized the award for the best coach provided by the League The professional league since the beginning of the current season, by winning it seven times in a row, and the coach showed his success early, as he was able to equalize the best start for Al Ain in the history of his participation in the professional league by winning the first four consecutive rounds, which was registered in the name of the Croatian Zoran Mamić.

The coach set another record for collecting the largest number of points in one season, and he currently owns 64 points, while the largest number of points he collected previously was 62 when he managed to win the 2012-2013 season, and the coach has an opportunity to enhance the number, as if he wins On Sharjah, it will reach point 67, thus raising the points ceiling in the coming seasons.