Mourinho's statistics, Mkhitaryan's injury and hopes for Spartak's midfielders: what you need to know about the Conference League final

On May 25, at the Arena Kombëtar in Tirana, Roma will try to win the first prestigious international trophy in their history, and José Mourinho will try to win the fifth European Cup final in a row. At the same time, the Portuguese is unlikely to be able to count on one of the leaders of the team, Henrikh Mkhitaryan, who continues to recover from injury, and his counterpart Arne Slot risks being left without main goalkeeper Justin Beilo and defender Tyrell Malasia. But Guus Teal, rented from Spartak, will certainly appear on the field, who became the team's top scorer in the Dutch championship. 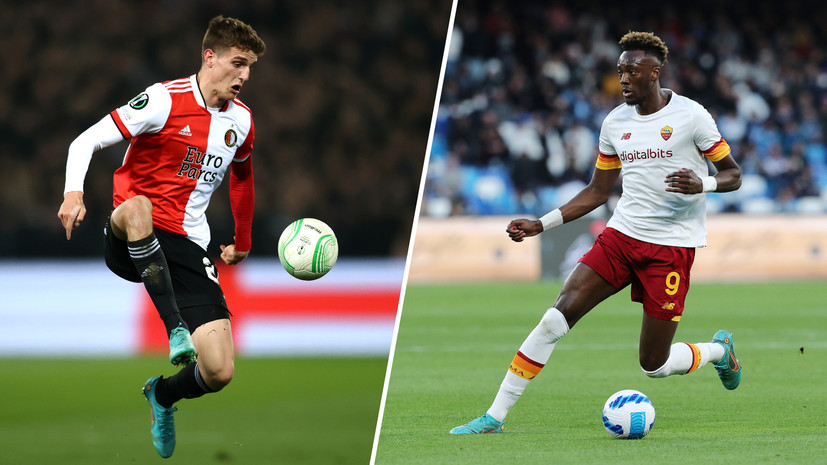 At first glance, the Conference League final evokes associations with the confrontation between David and Goliath.

Moreover, Roma is considered to be a stronger opponent - a well-known team with a big name, playing in one of the five leading championships.

And on the one hand, Jose Mourinho's wards can really be considered the favorites of the upcoming meeting, if only for the reason that the Portuguese specialist has a much more stellar selection of performers.

But if you remember the history, then for Roma everything becomes not so rosy.

Previously, she only made it to the finals of major international tournaments only twice: in 1984 she reached the decisive stage of the European Champions Cup, and seven years later - the UEFA Cup, but in both cases she suffered insulting defeats.

In total, the Romans can boast of only two trophies, the prestige of which raises serious questions.

In 1961, they won the Fairs Cup, and 11 years later, the Anglo-Italian tournament.

The second existed in its original form for only four years, after which it was transferred to the category of semi-professionals, and the first, although considered the unofficial predecessor of the modern Europa League, at that time had rather strange selection criteria.

In particular, until 1971 it fully justified the name, because only representatives of cities that hosted international fairs could participate in it.

He not only took the UEFA Cup twice, but also became the owner of the European Cup in 1970.

In the final, Celtic were beaten, having accomplished the unbelievable three years earlier: they won four prestigious titles - three national and one international.

At the same time, the successes of Rotterdam residents are not limited to the 20th century.

The last trophy was taken in 2002, when they broke the resistance of Borussia Dortmund with Jan Koller, Tomas Rosicky and Jens Lehmann.

At the same time, the composition of the victors was also quite impressive.

Battle of experience with youth

The renowned striker will help Feyenoord this time, however, as a mentor.

In 2020, van Persie joined Dick Advocaat's staff and took the position of forward coach, and subsequently continued to work after the resignation of the Little General, however, he focused on the development of technology.

And apparently, Robin likes Rotterdam, because he recently refused to move to Manchester.

The newly minted United mentor Eric ten Hag offered him to return to the former club and become his assistant, but he refused.

Perhaps the reason was faith in the current head coach of Feyenoord.

Arne Sloth took charge of the team last summer and not only brought it back to the top three on the move, but also taught it how to win on the road.

In the period from 2015 to 2021, Rotterdam won only one victory in 16 away meetings of European competitions, and this season they took the upper hand in four at once.

As the mentor said, at first even the Dutch journalists could not believe it, and one even shed a tear after the team’s successful trip to another city.

As a result, the specialist not only earned high praise from the club's sports director Frank Arnesen, who compared him with Guus Hiddink himself, but also got on the list of contenders for the position of Ajax helmsman.

Slot made his debut in the profession only in 2019, but in the first year he led AZ to Eredivisie silver medals.

Alkmaarts scored as many points as Ajax, and lost only on additional indicators.

True, things did not go well the next season, as a result of which Arne was fired in December.

Therefore, Feyenoord still took a little risk, trusting him with a high post.

The only question is whether the mentor's magic will be enough for the Conference League decisive meeting, in which he will be opposed not just by the Special, but by one of the most titled coaches of our time, who has never lost in European cup finals.

And if the Portuguese manages to extend this series at the head of the Romans, then he will forever write his name in the history of football and equal the legendary Giovanni Trapattoni and Udo Lattek.

Previously, only they managed to lead their teams to victories in three international tournaments.

At the same time, the uniqueness of the Portuguese lies precisely in his ability to achieve success in any conditions.

If the same Trapattoni took most of the awards with Juventus, then Mourinho was the first in history to bring four different teams to a decisive stage - before joining Roma, he managed to achieve the same results with Porto, Inter and Manchester United ".

Of course, Mourinho's achievements can be called incredible, and his contribution to the development of football is outstanding.

But he achieved all his successes not alone, but with the help of strong players.

Even at Porto, he had at his disposal such masters as Deco, Maniche, Costinha and Ricardo Carvalho with Dmitry Alenichev in addition, and at Inter and Manchester United he worked with the stars at all.

In Rome, under his leadership, there were also far from weak performers.

According to Transfermarkt, Roma (€369.35m) ranks third among all the participants in the Conference League in terms of squad value, behind only Tottenham (€587.25m) and Leicester, who descended from the Europa League ( €514.8 million).

For comparison, Feyenoord is only in seventh place (€134.05 million), slightly ahead of Fenerbahce.

And the most expensive among the wards of the Portuguese are the heir of Francesco Totti, the current captain of the Wolves Lorenzo Pellegrini, as well as ex-Chelsea striker Tammy Abraham.

Both are valued at €45 million, and the transfer of the latter helped Mourinho crank.

According to the Englishman, the mentor personally contacted him and persuaded him to move to Serie A, after which he began to call the specialist “uncle from Italy”.

And the purchase turned out to be more than profitable.

Abraham immediately scored 17 goals and surpassed the record for the number of goals in Serie A among the English, set by Jerry Hitchens in 1962.

Among the players of the Roman club, only the legendary Rodolfo Volk made his more impressive debut, scoring 21 times in the 1929/30 season.

However, Tammy scored not only in the Italian championship, but also upset opponents in the Conference League.

And he did it quite often, thanks to which he takes fourth place in the list of top scorers, lagging behind, among other things, two rivals in the final - Cyril Dessers and Luis Sinisterre.

It is from the Belgian with Nigerian roots and the Colombian that the main threat to the gates of Rui Patricio will come.

However, in addition to them, the Rotterdam team has someone to surprise Mourinho's team.

For example, Gus Til.

The midfielder, loaned from Spartak, is spending an impressive season for Feyenoord, even though he scored only in qualifying, and limited himself to only two assists in the European Cup itself.

In Rotterdam, the midfielder really blossomed, which is confirmed by 15 goals and fifth place in the Eredivisie scorer race.

For comparison, for the red and white, he scored only twice.

In addition to Thiel, Jorrit Hendrix, who also temporarily replaced Moscow with Rotterdam, will try to provide the team with all possible assistance in the fight for the trophy.

But if Gus is one of the leaders and consistently starts, then his compatriot cannot boast of this.

In the Dutch championship, he spent 309 minutes on the field, and in the Conference League - only 50. And there is no reason to believe that at a key moment the mentor will bet on him.

But if the middle line of the Dutch is extremely staffed, and its key performers are in excellent shape, then in the other three there are personnel problems.

Until now, it is not known whether goalkeeper Justin Beilo, defenders Tyrell Malasia and Gernot Trauner, as well as winger Rhys Nelson, loaned from Arsenal, will play at the Kombëtar Arena in Tirana.

However, while all of them do not leave hope to return to duty.

Including Beilo, who hasn't played since March, is eager to help his home team win the trophy.

According to media reports, in training he showed phenomenal dedication and was obsessed with the idea of ​​playing in the decisive stage of the Conference League.

Slot does not exclude this, according to which Justin has done a huge amount of work and is either in the final stage of restoration, or has already passed it.

Mourinho has no such problems.

Patricio is in excellent shape and leads in the number of clean sheets in the tournament, fully justifying the title of the first number.

Yes, and in defense with an attack, everything is in order.

Even Leonardo Spinazzola, who missed 278 days, finally recovered from a serious injury received at the European Championship and managed to enter the field three times in Serie A.

In Albania, "Roma" most likely will not be able to help only one player - one of its main creatives Henrikh Mkhitaryan.

In the first semi-final match against Leicester, he suffered a hamstring injury.

Initially, it was reported that the recovery would take two weeks, but the process was delayed.

Nevertheless, the club does not leave hopes to see the player on the field, although recently his name has been mentioned in a different context.

The other day, information surfaced about Mkhitaryan's desire to leave the Eternal City and follow the example of Hakan Chalkhanoglu, moving to Inter as a free agent.