The Organization of Consumers and Users (OCU) has warned of an unprecedented rise in the prices of new cars with a combustion engine in recent... 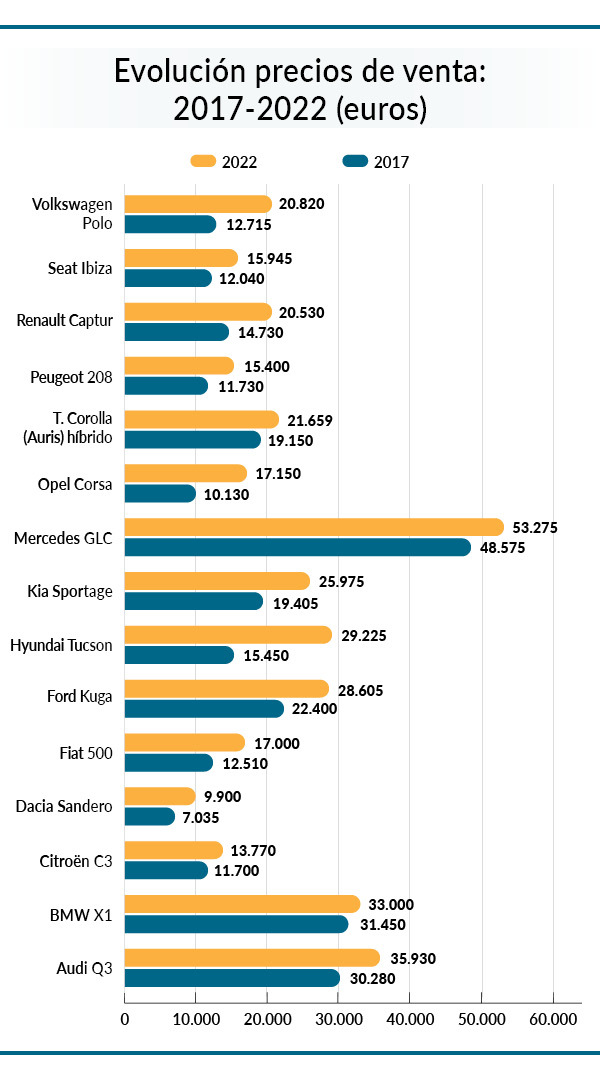 new cars with a combustion engine in the last five years: the average increase has been 35%, much higher than the general inflation accumulated in this same period, which reached 12.8%.

Among its causes, the EU penalties to car manufacturers for CO2 emissions, the microchip crisis, the inflation of many of the materials and products used in their manufacture.

To this should be added the increase in content, both comfort and safety, which is part of the standard equipment of the most modern models.

In fact, the organization gives the

Dacia Sandero as an example, the cheapest model

in the Spanish market.

It has gone from

However, there is no point of comparison between one car and another.

Neither in what is visible, nor in what is hidden, in the case of the platform on which it is built.

In fact, analyzing the prices of the best-selling model of the 15 most important brands in Spain,

only two have kept their prices below the accumulated general CPI (12.8%): the BMW X1 and the Mercedes GLC.

In this context, which resulted in a historic rise in prices in April, the OCU recommends drivers look for models that are on sale or in stock and compare prices: savings can reach 20% on the official price.

Another option is to look for electric vehicles or vehicles with hybrid motorization, since in the medium term they end up being cheaper.

In addition, in these cases the price increases have been lower:

costs 18% more than the cheapest model five years ago;

costs almost the same as the cheapest model back then;

most affordable electric, the Dacia Spring (17,905 euros without Moves aid),

costs 18% less than the cheapest electric model five years ago.

In any case, the organization urges the European authorities to promote the development of national microchip industries that can guarantee a regular supply of this type of component and ensure a stable price.

At the same time, it asks the Spanish administrations to

expand the current network of fast-charging charging stations: favoring the use of electric cars necessarily involves the presence of one every 50 kilometers.