The inside story of Madrid's Media Day: Benzema, Mbappé, the "little things" and the return of the press to Valdebebas

Eight in the morning. A group of nurses receives the press at the entrance of Real Madrid City. This Tuesday, 26 months later, since that previous Real Madrid - Betis... 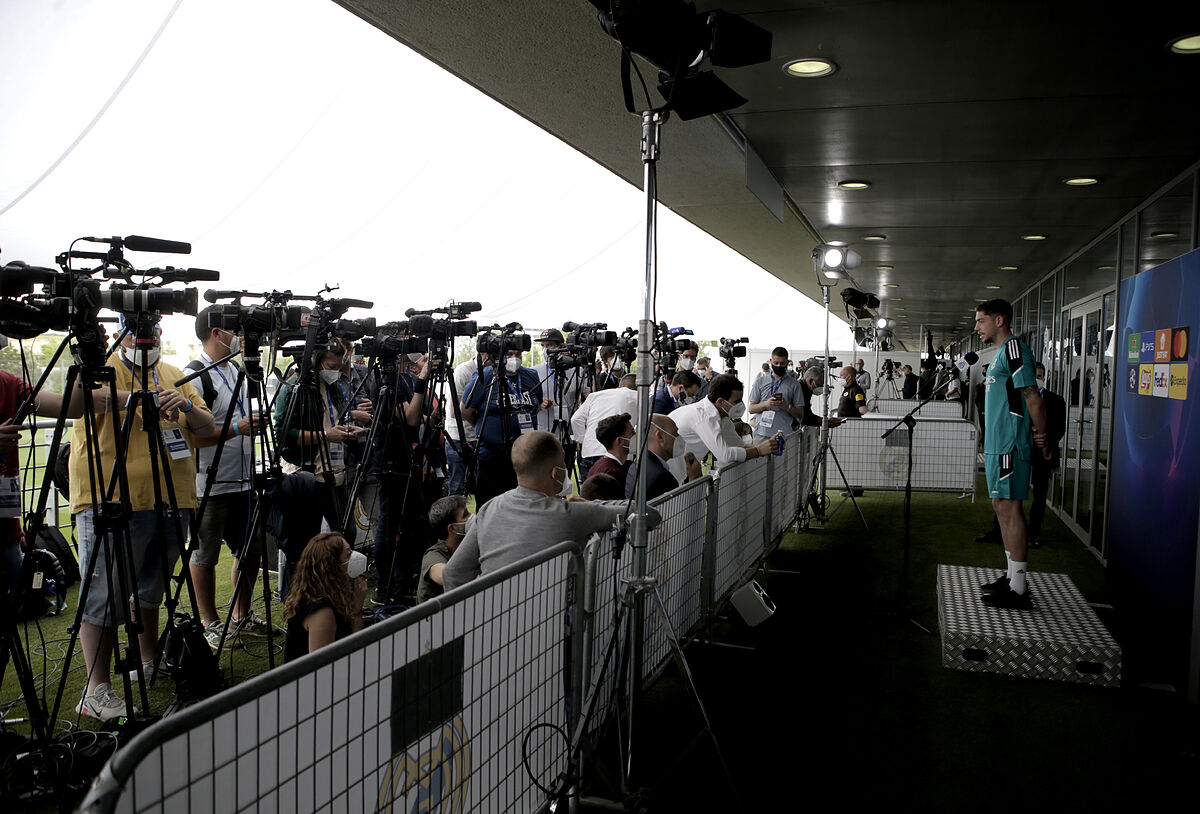 Eight in the morning

A group of nurses receives the press at the entrance of

26 months later , since that

, the media were able to set foot in

on a day when no official match was held.

to avoid contagion to what Ancelotti defined as "the most important match in the world of football", the white team celebrated the

At four minutes past ten, Carlo Ancelotti appeared in the press room of the main building of the sports city.

In front, distributed among the different rooms, almost

The question was obvious: «

The Italian coach's response, too: "We think about what we have to think about, we have never thought about players who are not in our team."

Hazard: "I need the team"

At eleven o'clock, the footballers began to jump onto the lawn of the sports city.

Courtois and the goalkeepers were the first, with

, hugging each other and chatting as they turned their heads to look at the cameras.

It was unusual for them, too, to have company.

took the opportunity to debate with his assistants, it was the turn of the sprints in the shots on goal.

«The finals are won, they are not played!»,

reacted to a great goal from

"The team needs you,"

told the Belgian on

"And I need the team," replied the

, who seems to be ready for Saturday.

The nerves of Rodrygo and Valverde

The mixed zone put Mbappé back in the spotlight with the final.

The "no" of the French

was the great protagonist of Tuesday morning.

Madrid did not want it that way, in whose plans prior to the refusal was announcing his signing after the final, but it was inevitable.

In spite of everything, the slogan for all the players was clear, repeating what their coach had declared before the press: "We are not talking about footballers who are not in our team," Marcelo and Casemiro confessed in the mixed zone.

, whose relationship with Mbappé during these months has played a fundamental role.

“We are going to play a Champions League final on Saturday.

This is not the time to talk about those

The final is more important than those other things, ”said the Madrid striker, indirectly forceful.

The parade before the media served to find out that

wants to continue for another season.

Everyone knows my wish

And that Rodrygo and Valverde, the youngest to walk in front of the cameras, were hallucinating: "The only advice Karim gives me is to pass the ball to him," the Brazilian joked.

laughed remembering the tackle on

moments after the Liverpool player twisted Benzema's ankle in a hard tackle.

It was in the quarterfinals last year.

Now it's time for the final.