Athletes: Arruabarina's list to face Australia proves his accurate follow-up to the league

Athletes confirmed that the list chosen by the coach of the first football team, Argentine Rodolfo Arruabarrena, and included 30 players, in preparation for facing Australia on the seventh of next June in the Asian play-off qualifier for the World Cup, proves his accurate follow-up of the ADNOC League for the game. 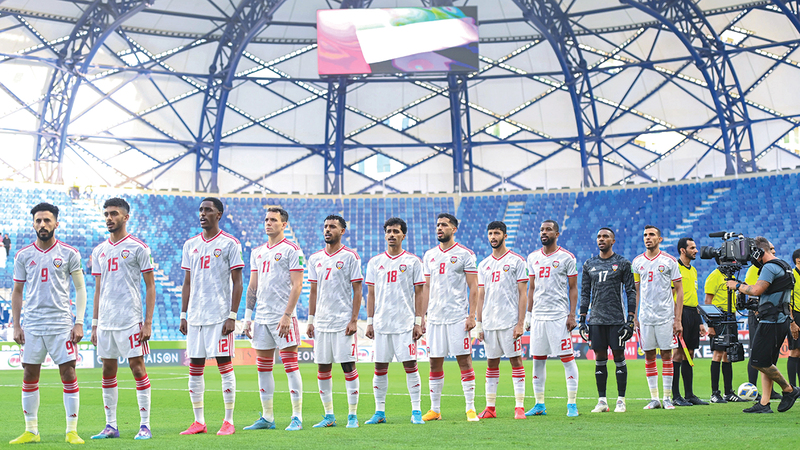 They confirmed that the coach chose the elements that serve his plans.. They described Amouri's return as a great addition

Athletes: Arruabarina's list to face Australia proves his accurate follow-up to the league

Athletes confirmed that the list chosen by the Argentine coach, Rodolfo Arruabarrena, and included 30 players, in preparation for the match against Australia on the seventh of next June in the Asian play-off qualifier for the World Cup, proves his accurate follow-up to the ADNOC Professional League, noting that it included the best elements. Which emerged distinctly with its teams in the league, stressing that these players are considered at the top of physical readiness, noting that the return of Al-Ahly youth player Omar Abdul Rahman to the national team again constitutes a great addition to Al-Abyad, given his great experience and high technical skills, stressing the importance of choosing the right time to pay With it, we hope that Amouri will reach the required technical readiness by 100%.

And they told «Emirates Today»: "The coach of the national team focused in his choices for players on the most ready elements in all aspects, whether technical, physical or moral, as well as focused on the players who can serve his technical plans and implement them optimally, and without a doubt, the list The selected team included the best players who appeared with their teams in the league with distinguished technical levels.”

The technical staff of the national team had chosen a list of 30 players in preparation for the upcoming match against Australia, which will be held in the Qatari capital, Doha, on the seventh of next June. Asian supplement.

The former national team coach and technical analyst, Dr. Abdullah Misfer, considered that the selected list is the most prominent currently, noting that this proves that coach Arruabarina is a good follower of the league and was present in all matches in the league, even the assistant coaches were present in the league matches unlike the former coach Marvik Stressing that the elements selected in the new list of the national team are elements that have excelled with their teams and deserve to be in the team during its upcoming match against Australia.

Misfer added: "The coach of the national team took a sufficient period to follow up the players during the league matches, and this period formed an image of the players who could serve him in the coming period, so he focused in his choices on the most prepared players and on the technical level of the players, and the coach relied on the list on According to his technical options during the Australia match, and then the Peruvian national team match if he first managed to overcome Australia’s obstacle.”

Abdullah Misfer stressed that the Australian match needs a certain type of players, who are distinguished in both physical and skill aspects, as well as good speed.

He continued: "The list included a group of players who excelled and must be present on the list, such as Al Ain goalkeeper Khaled Issa, as well as Al Ahly youth player Omar Abdul Rahman, and I do not think that there is anyone commenting on the list that the coach chose negatively, as it is the best and the best equipment."

Regarding Amouri’s return to the national team again, Misfer confirmed that Amouri is an addition to the team, but it is necessary to choose the appropriate time to push it, considering that everyone is happy with Amouri’s return to the team, but his physical readiness did not reach the required level by a large percentage, stressing that Amouri constitutes a great addition. In the event that he was relied upon during times of the match, as he has a great ability to control the ball and the rhythm of play and control, stressing that in the absence of Amouri as well as Khalfan Mubarak, in the last period, the team has become without a playmaker, pointing out that the absence of Al Wasl Lima player was also very influential in the national team.

Misfer said: "Amouri's return supports the team and the tactical aspect of the coach, and in this regard, we must thank Al-Ahly youth coach Mahdi Ali, who gave Amouri the opportunity to participate in the last period with Al-Ahly youth."

For his part, the former international player and technical analyst, Abdul Rahman Muhammad, confirmed that it was expected that the list would not come out of the names that were recently selected, considering that the selected elements are the most prominent currently, noting that the coach of the team knew what he wanted in the last period.

Regarding the return of Amouri to the national team again after a long absence, he confirmed that the player can benefit the team in periods of the match, stressing the importance of the coach preparing him during the preparation period leading up to the Australia match.

In turn, Al-Jazira Al-Hamra club coach Moataz Abdullah stressed that the selected list of players for the national team was balanced between the young and experienced elements, stressing the importance of fixing the starting lineup in which the team will play the match, given that the last period there was no stability in the starting lineup that is witnessing change In every match.

Moataz Abdullah described Amouri's return to the national team as very important as he is an important element in the team, pointing out at the same time that he does not expect Amouri alone to make the difference, given the Australian team's reliance on the physical aspect greatly.