An impenetrable wall: how Vasilevsky's 49 saves helped Tampa Bay defeat Florida and reach the semifinals of the Stanley Cup

Andrey Vasilevsky became the protagonist of the fourth match of the NHL Eastern Conference semi-finals between Tampa Bay and Florida. The Russian Lightning goalkeeper saved all 49 shots, participated in one of his team's goals and was recognized as the first star of the meeting. Wards of John Cooper took over in the tenth consecutive playoff series and took another step towards winning the third Stanley Cup in three years. 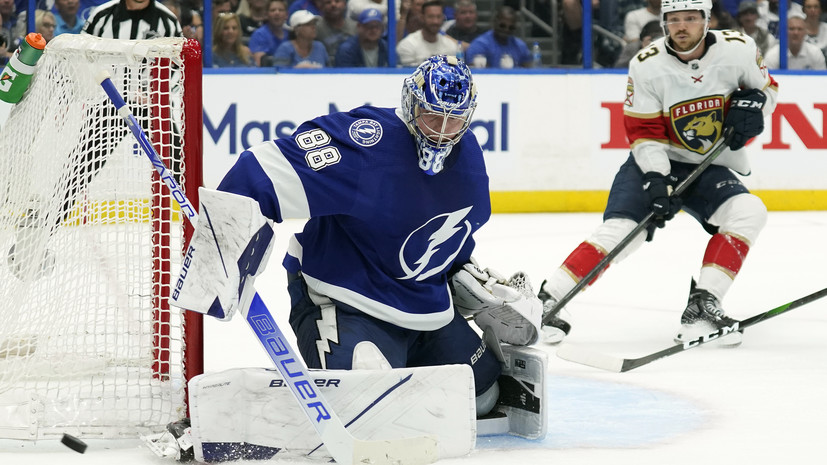 On the eve of the fourth game of the Eastern Conference semi-finals, Florida was in a difficult position.

Andrew Brunett's wards lost three times in a row to the current trophy holders and had minimal chances of reaching the next round.

Indeed, in the entire history of the NHL, only four teams managed to win back from a score of 0:3 in a series, and only twice this happened in the 21st century.

In 2010, Philadelphia created a sensation in the second round and made a comeback in the confrontation with Boston, and four years later Los Angeles followed suit.

In the opening round, the Kings were on the verge of elimination, but miraculously coped with San Jose, and subsequently won the Stanley Cup.

And the Panthers did everything possible to bring themselves closer to victory.

They literally swept the Lightning off the home ice and only in the first period disturbed Andrei Vasilevsky 18 times, and in the second forced him to enter the game 16 more times.

Claude Giroud, one of the creators of Philadelphia's success 12 years ago, was especially zealous.

Looking ahead, he hit the target nine times in the entire match - more than anyone on both teams.

According to this indicator, his teammate Sam Bennett (six) crept closest to him.

However, the Russian goalkeeper stood by the wall and sometimes made two or three saves during one Florida attack.

And when he was powerless, the goal frame stood for him.

In the first period, "Tampa" practically did not leave its own third of the site and did not force Sergei Bobrovsky to enter the game - the hosts made only three shots on the Florida target.

And although in the second segment the situation on the site changed dramatically, for a long time the main danger came exclusively from Nikita Kucherov.

It was he who first sent Anthony Cirelli into the breakthrough, and then he himself almost realized an impromptu bullet.

But the two-time winner of the Vezina Trophy was reliable.

However, in the second period, the Lightning managed to turn on the red light twice outside the Bobrovsky goal.

First, Alex Killorn put his stick under the click of Mikhail Sergachev from the blue line, and then Kucherov hit the top nine after a successful throw-in in someone else's zone.

However, in both cases, the goals were not counted.

First, the arbitrators noticed that the puck touched the barrier net, which means that it formally left the site.

And then they saw a handball performed by Cirelli.

However, at the beginning of the third period, Tampa still upset Bobrovsky.

The goal turned out to be extremely funny.

The Russian shouldered the throw of Zak Boghosyan, but Patrick Maroon, who arrived in time for a nickel, touched the puck hovering in the air and thereby not only changed the direction of its flight, but also disoriented the goalkeeper.

He lost sight of the puck and, rolling back, he brought it into the goal.

Only the judges could save the goalkeeper, but they did not determine the game with a high stick from the American.

The Panthers continued to press, but all their hopes were dashed against the unmistakable Vasilevsky, and 23 seconds before the siren, the Lightning put an end to the series.

And although the assist was recorded only on Cirelli, one of the assistants could well be called the goalkeeper of the hosts.

It was his save in the splits that preceded the Canadian's throw across the entire court, which, adjusted for hitting the board, turned into an assist.

In total, Vasilevsky repelled all 49 shots and was deservedly recognized as the first star of the meeting.

At the same time, in the current Stanley Cup draw, three goalkeepers more often rescued - Jordan Binnington (51), Jake Oettinger (50 and 64) and Igor Shesterkin, who parried 79 of 83 attempts in the battle with Pittsburgh.

Bobrovsky received the title of the third star of the reporting meeting, but this hardly cheered him up.

Florida failed to confirm the title of the strongest team in the regular season and continued the sad tradition among the holders of the President's Cup.

The last time they managed to overcome the barrier of the second round of the playoffs in 2015 (the Rangers reached the Eastern Conference Finals), and take the trophy even earlier (Chicago succeeded in 2013).

Tampa not only made it to the semi-finals of the Stanley Cup for the sixth time in the last eight years, but also prevailed in the tenth consecutive playoff series.

The last time such results were demonstrated by Montreal, which won 13 series in a row in 1976-1980.

The winners of the Carolina-Rangers confrontation will try to prevent the Lightning from extending the series and competing for the third Stanley Cup in a row.

So far, the Hurricanes are leading 2-1, but the fourth meeting will be held in New York, where Gerard Gallan's team has not lost since May 4.

As for Kucherov, although he could not distinguish himself in the fourth match with Florida, he with a margin became the best field hockey player of the confrontation among both teams.

The Russian chalked up seven (2 + 5) points and almost doubled his closest pursuers in this indicator.

The Panthers had the most points scored by one of the top scorers of the regular season, Jonathan Huberdeau (0 + 2).

And this is largely due to Vasilevsky, who conceded only three goals in total in the entire series.

In the history of the league, only four goalkeepers allowed opponents to score fewer times.

Tukka Rusk, Terry Savchuk, and George Hainsworth conceded only twice in a playoff showdown, while Anaheim goaltender Jean-Sebastien Giguere missed once in four games in the 2003 Conference Finals with Minnesota.