How did this Korean, who has been repeatedly discriminated against, put on the Premier League Golden Boot? 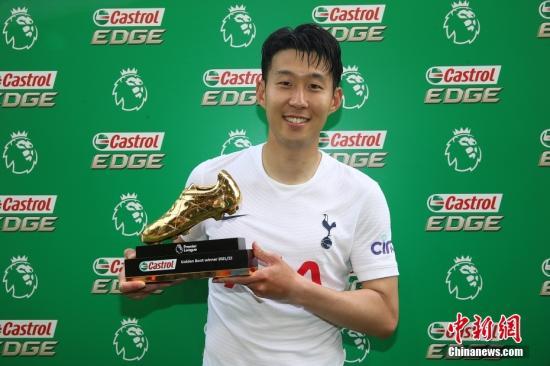 In the early morning of May 23rd, Beijing time, the curtain of this season's Premier League came to an end.

This is the first time an Asian player has won the Premier League Golden Boot, and Son Heung-min has made history.

None of Son Heung-min's 23 goals was a penalty.

As a down-to-earth Asian, able to stand out in the superstar-studded Premier League, Son Heung-min has endured a lot of pressure that is unimaginable to ordinary people.

After the game, a large number of fans attacked Sun Xingmin personally through social media, and the unsightly abuse was mixed with a lot of racial discrimination.

In foreign media reports, this kind of unfriendly external environment has actually existed since Sun Xingmin landed in the Premier League: some fans once shouted racist slogans at him in the stands; there are fans facing him, suspected of making "" Squinting" gesture... Even a professional TV commentator once called Son Heung-min a "DVD seller" during the live broadcast of the game.

In the face of endless insults, Son Heung-min was hardly affected.

After joining Tottenham, he quickly became an indispensable "thigh" in the team, and gradually won the affirmation of previous coaches and the trust of his teammates.

He conquered the top European leagues with the strongest competitive state, and also gave the most powerful counterattack to the racist.

This powerful psychological state of Sun Xingmin is closely related to his childhood experience, and it is also inseparable from the earnest teaching of his father.

And he embarked on the path of a professional player, inseparable from his father's words and deeds.

Son Heung-min's father, Son Woong-jeong, was also a football player when he was young.

After retiring due to injury, Sun Xiongzheng pinned his football dreams on his two sons.

Compared with his elder brother Son Xingyun, Son Heung-min has an almost crazy love for football.

In the words of his father: "Xingmin is a kid who thinks about playing football in addition to eating."

In order to be able to train with his brother, Sun Xingmin also made a promise to his father: "I will play football even if I die." So under the leadership of Sun Xiongzheng, Sun Xingmin's childhood devil training kicked off.

If the ball lands halfway through, you need to start over.

As a coach, his father treated Son Heung-min extremely strictly.

Son Heung-min once recalled: "My father was so impatient that he couldn't even spank us, because then we had to get down. He often kicked us like a shot, so accurate." Once, an old lady passed by the training ground. , Seeing that Sun Xiongzheng was teaching his son a lesson, he almost called the police.

Data map: On June 26, 2018, the South Korean team coach and Sun Xingmin appeared at the pre-match press conference at the Kazan Stadium.

On June 27, South Korea's World Cup group match against Germany will be held in Nizhny Novgorod.

At the age of 16, he was spotted by a German scout and went to Europe to start his dream-seeking journey.

Some people criticize Sun Xiongzheng's education method for being too harsh, but from his hometown to the Bundesliga to the Premier League, along the way, only his father silently accompanied Sun Xingmin.

They are father and son, mentor and apprentice, and close friends who keep each other warm and depend on each other.

When he was a child, he was afraid that his son would be injured during training. From the end of October to the beginning of December every year, Sun Xiongzheng would pull over a hundred packets of salt and sprinkle it on the playground. The playground sand in summer is softer.

When he grew up, Sun Xingmin had a professional coaching team. Sun Xiongzheng picked up the ball for his son on the sidelines, observed his son's shortcomings and gave suggestions after training.

In his spare time, Sun Xingmin trained his physical fitness, and Sun Xiongzheng practiced with him. At the age of over 500, he also developed a body of tendon...

Sun Xiongzheng's efforts are undoubtedly worth it.

After his transfer to Tottenham in 2015, Son Heung-min's career has been on the rise, and his value has continued to soar.

Now that he has won the Premier League Golden Boot, Son Heung-min's career has reached a new level.

He galloped forward, leaving those who had laughed at him far behind.

In the face of doubt and discrimination, Sun Xingmin finally chose to fight back with strength.

Perhaps, only when a person is strong enough, his dignity will not be trampled at will.

When the surrounding is dark, please let yourself be the light that illuminates everything like Son Heung-min.