The star of the Sharjah team, Brazilian Caio Lucas, shined this season, despite his team's failure to compete for the ADNOC Professional League title, and its early exit from the first round of the Asian Champions League. Caio is considered the most prominent trump card in the hands of the team coach, Romanian Olario Cosmin, which is what 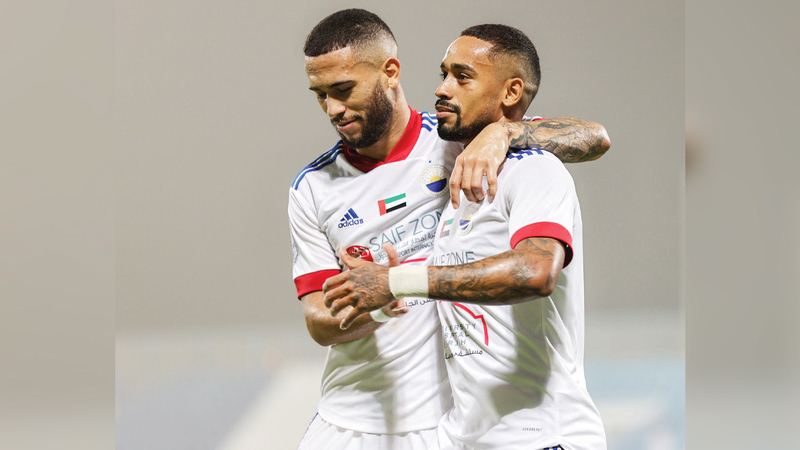 The star of the Sharjah team, Brazilian Caio Lucas, shined this season, despite his team's failure to compete for the ADNOC Professional League title, and its early exit from the first round of the Asian Champions League.

Caio is considered the most prominent trump card in the hands of the team's coach, Romanian Olario Cosmin, as evidenced by the player's numbers this season, in which he led the "King" to the President's Cup final, as well as to second place in the ADNOC Professional League, before a round of the season's conclusion.

Caio's last goal was his goal against the Emirates team in the 25th round the day before yesterday, where Sharjah won 2-1, and before that a double in a 4-0 victory over Baniyas in round 24.

The numbers confirm Caio's scoring strength this season, as he scored 13 goals out of 45 for Sharjah in the league, making him fourth in the top scorers, including two goals from the penalty spot.

Caio was also distinguished by creating six goals for his teammates, noting that Sharjah has so far won 17 matches, drew in three and lost in five out of 25 matches, including winning the previous seven matches in a row.

Caio participated in 18 matches, with a total minutes of 1562 minutes, and his market value, according to the (Transfer Market) website, is currently 4 million euros. His team in the deadly time, after Al Wasl was leading 2-1 until the 90th minute, Caio scored two goals in a row (90) and (92), thus putting his team on the cusp of the ninth title in the competition, where it meets Al Wahda on an unspecified date, as it was postponed. Final to next season.

With Caio's high scoring pace in the recent period, if he had participated in the six matches he missed, he could have increased his scoring result more.

Caio found himself more under the technical leadership of coach Cosmin, who employed him in a manner that suited his capabilities, which translated into goals, most of which were decisive.

The "King" fans describe Caio, who came to the Sharjah team in January 2020, coming from the Portuguese club Benfica, as the icon of the team and the maker of its joys in the recent period, as he always appears in the difficult times when the team needs him.

Caio forms an understanding duo with his compatriot Bernard Durate, as well as with Congolese striker Ben Malango.

Caio is characterized by high technical skills and capabilities that made him one of the best foreign players in the league this season.

Sharjah's Romanian coach Cosmin is counting on Caio as a man of difficult tasks in many big matches that need a player with certain specifications such as Caio, who knows his duties and responsibilities perfectly and performs the tasks requested by the coach to the fullest.

Although the player's contract will expire in the 2024 season, he is expected to be extended by the club's management to continue with the team in appreciation of the advanced technical level that he has been providing so far.

• It occupies the fourth place in the league's top scorer, and its market value is currently four million euros.