The cyclist of the national team, Youssef Mirza, presented the UAE with the 23rd medal in the third Gulf Games hosted by the State of Kuwait during the period from 16 to 31 this month, with the participation of more than 1,700 athletes from the Cooperation Council for the Arab States of the Gulf, and the UAE is participating in it with 285 athletes and athletes 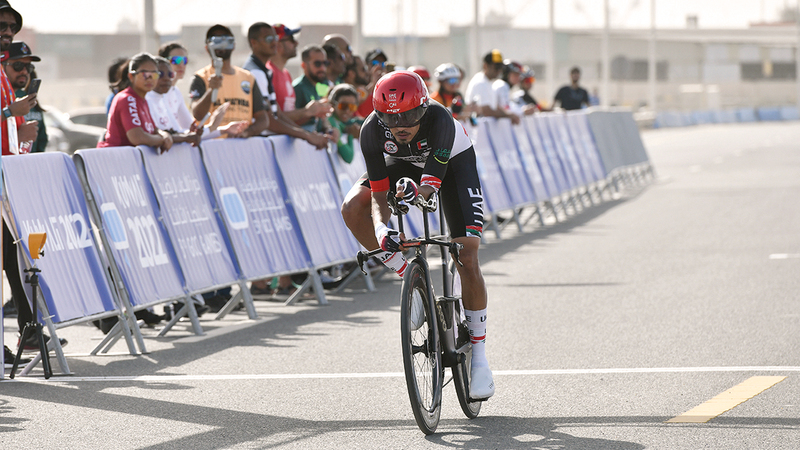 He won the silver by 47 seconds from the first place

The cyclist of the national team, Youssef Mirza, presented the UAE with the 23rd medal in the third Gulf Games hosted by the State of Kuwait during the period from 16 to 31 January, with the participation of more than 1,700 athletes from the Cooperation Council for the Arab States of the Gulf, and the UAE is participating in it with 285 male and female athletes participating in 16 individual and team games The delegation is accompanied by 39 trainers, 24 administrators, and 12 specialists and therapists.

Mirza won the silver medal in the men’s individual time trial for a distance of 24.7 kilometers with a time of 31.27.71 minutes, while Kuwaiti Sayed Jaafar Al-Ali won the gold in the competition with a time of 30:39.79 minutes, and Bahraini Ahmed Madan won the bronze medal with a time of 31:46.43 minutes.

The national tennis team finished the first day’s competitions by participating in the singles category with four matches in the round of 32 in the third Gulf Games in Kuwait, as Abdul Rahman Al-Janahi qualified for the round of 16 after defeating his Kuwaiti counterpart Abdul Raziq Abdullah 6-0, 6-1.

The national basketball team qualified for the semi-finals of the Gulf Games, despite losing at the conclusion of the preliminary round competitions against Qatar, 61-72. Kuwait hosts the tournament along with Qatar.

The basketball team is looking forward to qualifying for the final round when it meets its Bahraini counterpart today in a heated confrontation that will determine the identity of the qualifier for the Gulf basketball summit to meet the winner of the Kuwait-Saudi match.

The national volleyball team also lost to its Bahraini counterpart 0-3 in the Gulf Sports Games, to remain devoid of points after suffering the second defeat in a row, and the results of the three games were in favor of Bahrain by 25-20, 25-18, 25-23, Today, our team is scheduled to face its Saudi counterpart in the third round.

The national table tennis team also lost to Qatar 3-0 at the beginning of its Gulf career in the teams competition that witnessed the participation of the young trio of the team Abdullah Mohammed, Salah Al Balushi and Mohammed Al Balushi.

Our team seeks to reap the first points when it meets Saudi Arabia and Bahrain today.

The UAE national team narrowly lost to its Bahraini counterpart, five goals to three, in the semi-finals of the women's futsal competition, which was held at the Sheikh Saad Al-Abdullah Complex in the competitions of the third Gulf Games.

The "Women's White" presented its best matches since the beginning of the tournament and lost with great difficulty against the most prominent candidate to win the title, as the national team advanced twice through both Nouf Al-Enezi and Afra bin Hindi, then the Bahraini team scored three goals before goalkeeper Noura Al-Mazrouei tied, to end the first half with a tie. 3-3, while the second half witnessed Bahrain scoring two goals, ending the match with the loss of the UAE team.

• Mirza: The land worker played a big role in the competition

The national team cyclist Youssef Mirza confirmed the possibility of winning more medals in the individual race, stressing that the silver medal in the individual race, which came with a very small difference of 47 seconds from the Kuwaiti cyclist, is an addition to the team’s achievements in the course, explaining that the land factor played a major role in The competition, as well as the presence of many fans and support for the Kuwaiti cyclist, but the focus will be greater during the upcoming competitions, especially in the general individual race, which will witness the coronation of two gold medals.

• Al Janahi: The atmosphere is different

The player of the national tennis team, Abdul Rahman Al-Janahi, confirmed that the stadiums hosting tennis competitions are somewhat different from the stadiums in Dubai, especially that the stadiums are open from all sides and the air affects them greatly, noting that he tried to take time at the beginning of the match to get used to the stadium and try to keep pace with the opponent who He is competing in many competitions on this court, noting that the tournament witnesses the participation of more than one player from the ATP rankings as well as the International Tennis Federation classification, which gives the level of the tournament additional strength and enhances its use in the best possible way.

Al-Janahi expressed his wishes to achieve a medal on behalf of the UAE in the Gulf session, explaining that the final round will witness the participation of the first seed in the tournament.

• Abdul Rahman Al-Janahi qualified for the round of 16 in singles tennis.