Manchester City fell behind against Aston Villa 0-2 until the 76th minute to win 3-2 in the "Hitchcocky" scenario over a period of 5 crazy minutes, to retain its title as the English Premier League football champion, at the same time depriving its only rival, Liverpool, from achieving an unprecedented quartet in england.and 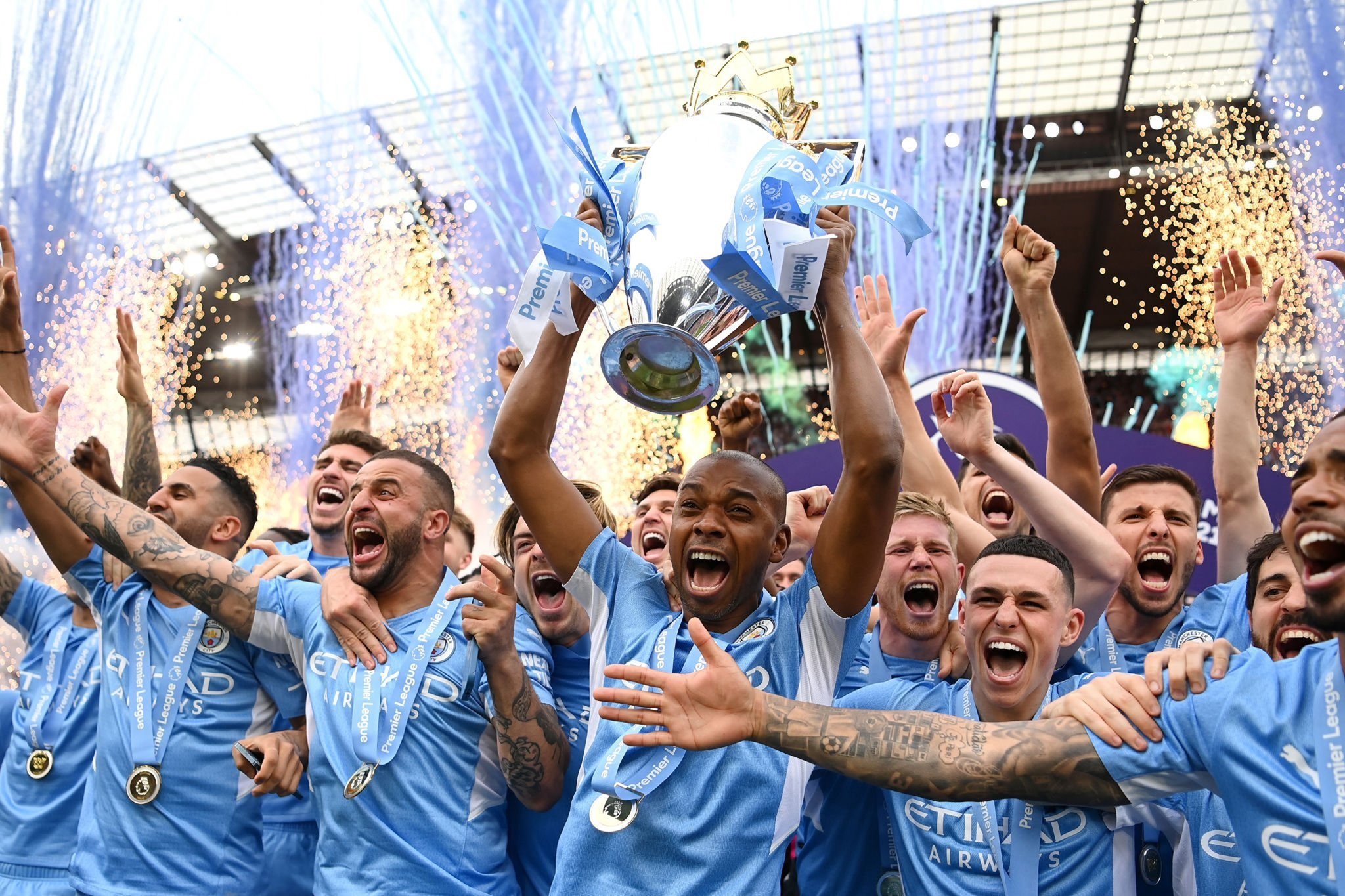 Manchester City fell behind against Aston Villa 0-2 until the 76th minute to win 3-2 in the "Hitchcocky" scenario over a period of 5 crazy minutes, to retain its title as the English Premier League football champion, at the same time depriving its only rival, Liverpool, from achieving an unprecedented quartet in England.

The German substitute, Ilkay Gundogan, imposed himself as a star of the match by scoring two out of three goals for his team in the 76th and 81st minutes, after entering a substitute in the 69th minute, while Spaniard Rodri II scored (78).

Manchester City won the title by one point over Liverpool (93 vs 92), who in turn won a late victory over Wolverhampton 3-1.

The title is the fifth for Pep Guardiola's squad in the past five seasons, and the eighth for the team in its history.

"These guys are legends who will be remembered for a long time," Guardiola said. "When you win this country four times in five years, that means these guys are special."

"The last match is always special, we had different feelings against Aston Villa because we were not playing in normal conditions. We had to control this aspect."

"After the second goal, things became very difficult, but we managed to turn things around in our favour, and winning in front of our fans is the best feeling."

The scenario of the coronation today reminded of the last event in 2012 when Manchester City fell 1-2 to its guest Queens Park Rangers until overtime before Edin Dzeko scored the equalizer and then Argentine Sergio Aguero the famous winning goal for his team to win the championship for the first time since 1968.

At the Etihad Stadium, Manchester City thought that the title escaped him when Aston Villa advanced with two clean goals, the first with a header from Polish full-back Matti Cash (37) and Brazilian Philippe Coutinho (69), but City returned from afar and turned the table within 5 minutes to prevent Liverpool From achieving an unprecedented quartet in England, bearing in mind that the latter won the League Cup by beating Chelsea on penalties last February, and the English Cup last week by defeating Chelsea in a similar scenario.

Liverpool will also meet Real Madrid in the Champions League final next Saturday.

Manchester City dominated the game completely, but it hit a solid wall defense from Aston Villa, which relied on counter-attacks, taking advantage of the speed of striker Oli Watkins.

Despite all of City's attempts, City was not able to pose a great danger to Aston Villa's goal, which advanced after a counter-attack, in which the ball reached the left side towards French full-back Luca Digne, and he raised it inside the area to fly Portuguese Cash Full Joao Cancelo and deposited it into the net (37).

City threw all his weight in the second half, but Aston Villa managed to consolidate their lead through Coutinho, taking advantage of a ball from Utkins to make it difficult for City.

City coach Pep Guardiola played Gundogan's card, and it was a winner because he reduced the difference with a header from a cross for the other alternative, Raheem Sterling (76).

The goal gave a huge morale boost to City, who added the equalizer with a Rodri shot two minutes later, before Gundogan gave his team a precious victory with a neat pass from Belgian Kevin De Bruyne.

On the other hand, Liverpool, who started the match in the absence of Dutch defense pole Virgil van Dijk and Egyptian Mohamed Salah due to two minor injuries, were left behind against Wolverhampton Wolverhampton with an early goal by Portuguese Pedro Neto after two minutes, but Senegalese Sadio Mane equalized with a smart pass from Spaniard Thiago Alcantara (24).

Liverpool waited until the 84th minute for the Egyptian Mohamed Salah, who participated in the second half, to advance, taking advantage of the storm inside the area, before the Scotsman Andy Robertson scored the third (89), but to no avail.

Salah and South Korean Heung-Min Son shared the golden boot for the top scorers in the league with 23 each, after the latter scored two goals against Norwich City in the match that ended with a landslide victory for his team with five clean goals to settle the fourth place and qualify for the Champions League next season, at the expense of Neighbors in north London Arsenal who honored the favor of Everton 5-1.

Manchester United will participate in the European League (European League) despite losing against Crystal Palace 0-1, due to the loss of its direct competitor on this card, West Ham against Brighton 1-3, so that the loser is satisfied with participating in the Conference League competition.

Burnley fell to the ranks of the "Championship" league, losing to Newcastle 1-2, while Leeds remained "excellent" for a new season by beating Brentford 2-1.