Manchester City overturned its lag against Aston Villa 0-2 until the 76th minute to win 3-2, to retain its title of champion of the English Premier League, yesterday, in an exciting scenario over five crazy minutes, in the 38th and final round of the championship. In the hands of Manchester City for a serum 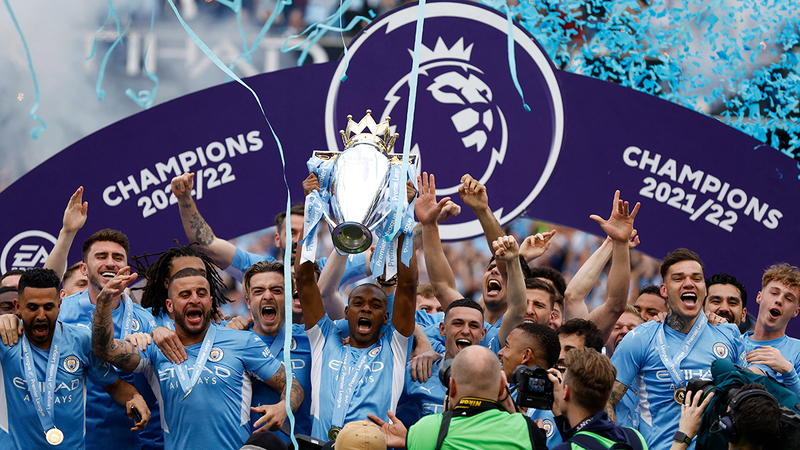 He beat Aston Villa 3-2.. and won the title for the fourth time in the last 5 seasons

Manchester City overturned its lag against Aston Villa 0-2 until the 76th minute to win 3-2, to retain its title of champion of the English Premier League, yesterday, in an exciting scenario over five crazy minutes, in the 38th and final round of the championship.

The title was almost lost in the hands of Manchester City in favor of its direct competitor, Liverpool, but Guardiola's men managed to achieve "Remontada" to maintain a difference of one point from Liverpool (93 compared to 92), who won a late victory in turn over Wolverhampton 3-1.

The substitute, Manchester City's German star, Ilkay Gundogan, imposed himself as a star of the match by scoring two out of three goals for his team in the 76th and 81st minutes, after he entered as a substitute in the 69th minute, while Spaniard Rodri II scored (78).

The title is the fourth for the Spanish coach Pep Guardiola's battalion in the past five seasons and the eighth for the team in its history, despite the fierce pursuit from Liverpool.

At the Etihad Stadium, Manchester City thought that the title escaped him when Aston Villa advanced with two clean goals, with a header from Polish full-back Matti Cash (37) and Brazilian Philippe Coutinho (69), but City returned from afar and turned the table in five minutes to prevent Liverpool from achieving An unprecedented quartet in England, knowing that the latter won the League Cup by beating Chelsea on penalties last February, and the English Cup last week by defeating Chelsea in a similar scenario.

Liverpool will also meet Real Madrid in the Champions League final next Saturday.

Despite all of City's attempts, he was not able to pose a great danger to Aston Villa's goal, which advanced after a counterattack, in which the ball reached the left side towards French full-back Luca Digne, and he raised it inside the area to fly Portuguese Cash Full Joao Cancelo and deposited it into the net (37).

City threw all his weight in the second half, but Aston Villa managed to consolidate their lead through Coutinho, taking advantage of a replay from Utkins to make it difficult for City.

City coach, Pep Guardiola, played the Gundogan card, and it was a winner because he reduced the difference with a header from a cross for the other alternative, Raheem Sterling (76).

The goal gave a huge morale boost to City, who added the equalizer with a Rodri shot two minutes later, before Gundogan gave his team the precious victory with a neat pass from Belgian Kevin De Bruyne.

On the other hand, Liverpool fell behind against its guest Wolverhampton with an early goal by Portuguese Pedro Neto after two minutes, but Senegalese Sadio Mane equalized with a smart pass from Spaniard Thiago Alcantara (24).

Liverpool waited until the 84th minute to give the Egyptian Mohamed Salah, who participated in the second half, the lead, taking advantage of the turmoil inside the area, before the Scotsman Andy Robertson scored the third (89), but to no avail.

Facts about Manchester City this season

■ Guardiola has become the second most successful coach in the Premier League era, ahead of Jose Mourinho and Arsene Wenger, after both won three titles.

■ The team lost only three games throughout the season and scored 99 goals.

■ City won the title despite the lack of a clear striker in its ranks after failing to sign Harry Kane from Tottenham Hotspur.

■ Jack Grealish was the only major addition to the team that won the title last season, joining the team for 105 million pounds ($131 million) from Aston Villa.

■ Although he started 22 games, Grealish did not have a significant impact on the team with Guardiola sticking to his usual way of last season.

■ Winning the title will relieve the pain of City's exit against Real Madrid from the Champions League semi-finals, which ended Guardiola's dream of leading the team to the title of the most famous continental club championship.

City advanced from the second minute of the first leg until the 90th minute of the second leg in Madrid, but lost in extra time to bid farewell to the tournament, losing 6-5 on the total score.