Athletes: The second and third divisions have made great gains for UAE football

Athletes said that many gains have been made for the Emirates football, since the start of the Competitions Committee in the Football Association to organize the second and third division league competitions, stressing that the two competitions contributed to increasing the geographical area for football practice, organizing practice, and providing greater opportunities for investment in football. 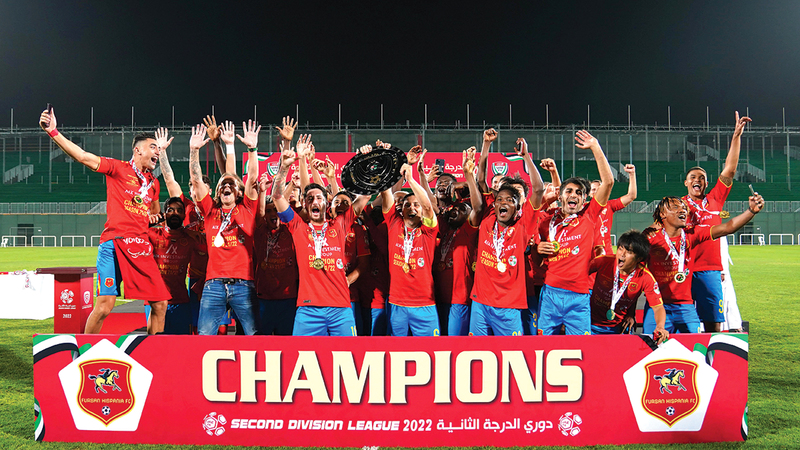 They suggested the participation of its clubs in the preliminary cup

Athletes: The second and third divisions have made great gains for UAE football

In their conversation with "Emirates Today", they demanded more support for the clubs of these two competitions, especially at the media level, as well as giving them the opportunity to participate in the President's Cup, at the preliminary level, in addition to addressing the negative points they suffer from, so that they develop more in the future, and finding a mechanism to organize Promotion and relegation between the clubs of the first, second and third divisions, raising the value of the prizes allocated to the winning teams and other forms of support.

It is noteworthy that the second division includes 12 teams, and the “Knights of Hispania” team won the title last season, while at the level of the third league, it will be a final match between Gulf United and Fleetwood, and the competition also includes 12 teams.

An opportunity for the citizenThe former coach of the Dibba and Masafi teams, Muhammad Al-Khadim, said that “the establishment of the two championships has achieved good gains that serve the player, coach and administrator, the citizen, who will not find the opportunity to work in professional and first-class clubs.”

Now he has the opportunity to work within the ranks of these clubs, in addition to providing new opportunities for sports investment.

He added: The two championships contribute greatly to supporting UAE football, and to organizing the practice of the game at the state level under the supervision of the Football Association and in accordance with the mechanisms used in other countries by providing modern football factors.

He also said: They are really an opportunity for national players who did not get a chance to play in the professional and first class, as well as an opportunity for residents, people born in the country and passport holders to practice football, and we have seen more than one player who was on his way to stop playing football returned through these two tournaments.

Gulf FC Chairman Ahmed Al-Tawash described the Football Association’s organization of the second and third division competitions as important and useful, and said that they “contributed greatly to the practice of football in a regular manner, and opened the door to many clubs that needed to organize a league for them.” Officially combines it with its counterparts from the teams.”

Al-Tawash stressed that the establishment of the two tournaments contributed to the increase in the popularity of football in the UAE, and gave resident players an important opportunity to participate in official tournaments, which contributed to highlighting a number of talented players.

He explained: The two championships are a win for the Emirates football, and they have achieved many positive things, and they need prominent media support in order to better shed light on the players and coaches.

The former member of Al Dhafra Club management, Abdullah Al Hammadi, confirmed that “the two competitions are an important addition to the football tournaments organized by the Football Association, because they increased the number of matches and gave an opportunity to build a new generation of athletes in various aspects who will contribute to the development of Emirati football in the future.

Al Hammadi said: The organization of the two competitions contributed significantly to expanding the geographical area for playing and competing in football, and instead of having one club in the city, the number became larger, which means that it will accommodate more players, and this thing is very important because it will give a greater opportunity to discover talented people.

The winnings of the two tournaments

■ Formal regulation and competition of the game.

■ An opportunity for sports investment by companies and investors.

■ Giving an opportunity to players who do not find a team, especially players of the age groups.

■ Space for the development of stadium judges and a new generation of administrators.

■ Contain resident players and give them a regular opportunity to practice football.

Requirements for the success of the two competitions in the future

■ Media support and highlighting of players and teams.

■ Increase the value of prizes for the winning teams.

■ Finding a work mechanism that contributes to reducing the obstacles encountered.

■ Study of its participation in the first rounds of the President's Cup competition.

■ Finding a clear mechanism for the rise and fall between the first, second and third grades.