The second leg of the series of His Highness the President’s Cup races for purebred Arabian horses, which was held the day before yesterday, was concluded at the ancient Pimlco sandy track in Baltimore, Maryland, USA, within the agenda of the 29th edition of 2022. 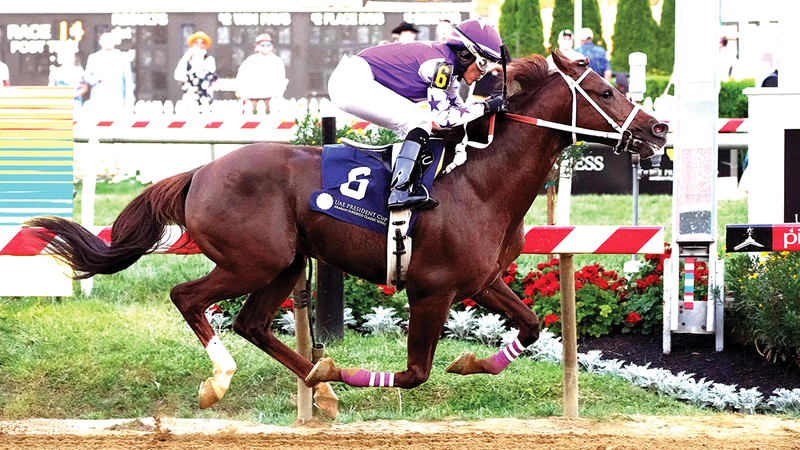 The horse is the fear of time.

The second leg of the His Highness the President's Cup series of purebred Arabian horses, which was held the day before yesterday, was concluded at the ancient Pimlco sandy track in Baltimore, Maryland, USA, as part of the agenda of the 29th edition of 2022.

The horse, Hiyab Al-Zaman, descended from (Hilal Al-Zaman/May Shelby Cobra Bint Colino), succeeded in seizing the precious cup title, which witnessed the participation of the elite Arab horse studs in America in the race that was held for a distance of 1770 meters “First Class” for horses aged four years and over, and reached The prize money is $100,000.

A press statement said: "The precious cup has succeeded in confirming its prestigious position and leading reputation in the most prestigious international races, and has been able to record important achievements for the Emirates and raise Arab horse racing to international ranks, after it was held within the program of the 147th edition of the famous Brickens Stakes Festival (the American Triple Crown), which It included 14 races, and enjoyed a mass following of more than 100,000 spectators, in addition to the media interest it witnessed in light of the direct television broadcasts of most American channels and social media platforms, which contributed to strengthening the partnership of the precious cup and horse owners in America, and consolidating its great brilliance in American tracks. and global races.

The event was held as an extension of the vision and approach of the late founder, Sheikh Zayed bin Sultan Al Nahyan, may he rest in peace, to elevate the purebred Arabian horse in all global tracks.

Hiyab Al-Zaman was able to impose his merit and deserve the title by leading the race from the start to the end, to achieve a comfortable victory that enabled him to cut the race distance in 1:55:70 minutes, and (Hiyab Al-Zaman) returns to Angel Meyer, Susan C, James E Under the supervision of coach Jeremias Castro, and under the leadership of jockey Carlo Cedeno, while (Quick Sand), the champion of the 2018 edition, descended from the (Burning Sand / Trevis Silky) lineage of the owner Betty J, Joseph, Giles, and under the supervision and leadership of coach and jockey Girnsto Torres, while In third place came (Uptown Lady Arabella) from (Burning Sand / DC and Lis Song) to owner Christa Henning Sgard, under the supervision of coach Lyn Ashby and led by jockey J Acosta.In the end, Sheikh Mohammed bin Khalifa Al Nahyan, First Secretary at the UAE Embassy in Washington, and Saeed Al Muhairi, representative of the Organizing Committee of the President's Cup for Arabian Horses, presented the cups to Susan Mayer, President of the Arabian Horse Racing Club in America and owner of Hiyab Al-Zaman, along with the coach and the jockey, in the presence of Abdul Rahman. Al-Nuaimi and Ahmed Al-Murr from the UAE Embassy in Washington.

• Mohammed bin Khalifa: The great presence is an indication of the prestigious position of the Emirates

Sheikh Mohammed bin Khalifa Al Nahyan, First Secretary at the UAE Embassy in Washington, said: "We are proud of the Emirati presence at the ancient Bricks Stakes Festival, which is an indication of the UAE's global prestige in equestrian sports, which is one of the elements of the country's authentic national heritage."

• Al-Rahmani: The American station demonstrates the leadership of the Emirates

The General Supervisor of the President’s Cup Series for Purebred Arabian Horses, Faisal Al-Rahmani, said: “We are proud to continue the precious Cup races with a strong presence in the scene of major international races, as the American station, witnessed by more than 100,000 spectators, demonstrated the leadership of the UAE and the distinguished historical march of the Cup series. The precious one, and its great role in leaving wide echoes at each of its stations that roam the world every year.”