The head coach of the Kaliningrad Lokomotiv Andrey Voronkov refused in principle to apologize to the Cuban volleyball player Ailama Montalvo for the word "monkey" he uttered during the final match of the Russian championship. The disciplinary commission of the VFV recognized the statement as offensive and recommended that the specialist be suspended from work for up to two years. The final decision on the duration of the disqualification will be made by the executive committee of the federation, whose meeting will be held at the end of May. 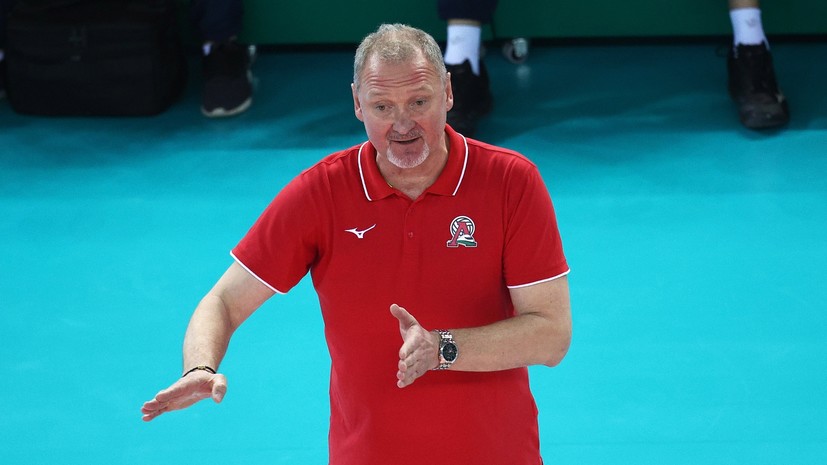 More than a week from the pages of the media does not leave the story of the statement of the head coach of the Kaliningrad "Locomotive" Andrey Voronkov during the fifth match of the final series of the championship of Russia with "Uralochka-NTMK".

Recall that in one of the timeouts, the specialist turned to Valeria Zaitseva: “Why are you catching this monkey again?”

Fans and specialists were indignant at what they heard, considering it an insult to one of the athletes: the dark-skinned player Ailama Montalvo is playing in the Sverdlovsk team.

They demanded an apology from Voronkov, or at least an explanation, but the mentor stubbornly kept silent.

On May 19, a meeting of the disciplinary commission was held at the office of the All-Russian Volleyball Federation, which was attended by the general director of the Kaliningrad club Alexander Kosyrkov, as well as Voronkov himself.

The coach, by the way, had an anniversary that day - he turned 55 years old.

The members of the commission analyzed the video recordings of the game, listened to the opinions of the parties, independent experts, and also took into account the public outcry.

Their verdict - Voronkov is guilty of committing a disciplinary violation, and the punishment should be disqualification for up to two years.

The final decision will be made by the WFV executive committee, which will meet on May 31.

But the most shocking in this trial was the position of Voronkov himself and the club.

“Despite the obviousness of the situation, Lokomotiv Kaliningrad and Andrei Voronkov personally refused to apologize in principle to the Uralochka-NTMK club and personally to the player Ailame Montalvo,” the VFV website reports.

The federation also noted that Loko sent a letter “in a legal style” to them, trying to shift the focus of attention and calling the accusations against the head coach baseless.

Such demonstrative denial caused outrage in the volleyball environment.

In particular, the general director of Uralochka, Valentina Ogienko, believes that Voronkov should be ashamed of his silence.

“Voronkov’s speech and refusal to apologize are his personal problems, the problems of the club, but definitely not ours.

What can I say?

Such a human factor.

The General Secretary of the VFV, Alexander Yaremenko, commenting on the decision, called it "quite obvious."

At the same time, he stated that he was not surprised by the fundamental refusal of Voronkov to ask for forgiveness or at least publicly explain his act.

According to the functionary, "the farther into the forest, the harder it is to apologize."

“It is difficult to give comments, except for those that we will have official ones.

On the one hand, the situation is simple, but on the other, it is difficult.

According to the silver medalist of the Sydney Olympics Tatyana Gracheva, the reaction of the Lokomotiv coach not only spoils his reputation, but also hurts all of Russian volleyball.

The former binder of the Russian national team, and now a television commentator, found it difficult to explain why the specialist is still silent.

“If he believes that he did not offend anyone, then you need to explain what he meant.

If this was the case, as many understood, you need to apologize.

And then let the federation decide.

The worst thing about this situation is silence.

This situation has been going on for a very long time and it is ruining the reputation of volleyball.

Voronkov had to react very quickly, to ask for forgiveness.

The faster the better.

Unfortunately, we have attracted such negative attention to volleyball that it does not need at all, ”Gracheva said in a conversation with RT.

At the same time, she expressed confidence that there is no racism in her native sport.

“Unfortunately, many can now argue with me.

But we have a very respectful attitude towards all players from all countries in any team, ”the former athlete emphasized.

The well-known commentator Dmitry Guberniev once again spoke very harshly about what happened, emphasizing that he was ashamed of "such people."

“Coach Voronkov is an unscrupulous bastard and a scoundrel!

There is a sense of shame and embarrassment for Lokomotiv Kaliningrad and its leadership!

- the presenter wrote in his Telegram channel.

Guberniev also said that, according to his information, the coach faces six months of disqualification, and not the maximum possible two years.

However, he expressed the hope that these data are erroneous and the federation will “find a more serious punishment” for the 55-year-old specialist.

In turn, Ekaterina Gamova, on the contrary, said that two years would be too harsh a verdict.

“But, of course, there should be some kind of disciplinary punishment.

They made their situation worse.

If they had apologized immediately after the match, the situation would have been different, ”the RB Sport volleyball player, well-known in the past, quotes.

Ex-team player of the Russian national team Alexei Spiridonov said that Voronkov got what he deserved for his words, although humanly the volleyball player feels sorry for the coach.

“Two years, I think, is a harsh disqualification.

Thought he'd get away with a couple of matches.

If they refused to apologize, then they chose this way of playing the game.

They considered that they had no reason to apologize, ”Spiridonov said.

Whatever the final decision of the executive committee, Voronkov's reputation suffered quite a bit.

And if some time ago his name sounded among the candidates for the vacant post of head coach of the Russian men's team, now the president of the VFV, Stanislav Shevchenko, categorically declares that this is not so.

“We have other specialists,” he emphasizes.

According to Gracheva, Voronkov's behavior certainly played a role in this, but he was one way or another not the favorite in the fight for the position.

“Even if there is no severe punishment, his reputation has changed, probably not for the better.

But there is a huge competition for the post of head coach, if we take at least those names that were announced.

Among them, including Konstantin Bryansky, who won two league titles in a row with Dynamo.

This competition still had to be won.

Therefore, today's trial is not a decisive moment in the matter of choosing the head coach of the national team, ”the former volleyball player emphasized.