In the hope of leaving the champion: why it will be difficult for Nurmagomedov to interest Emelianenko in a fight with dos Santos

Eagle FC owner Khabib Nurmagomedov announced his desire to arrange a duel between MMA legend Fedor Emelianenko and former UFC champion Junior dos Santos. According to him, both have long been the epitome of mixed martial arts, and fans deserve to watch them showdown in a cage. Nevertheless, The Last Emperor himself admitted that in his farewell fight he would like to fight for the Bellator heavyweight title with Ryan Bader. 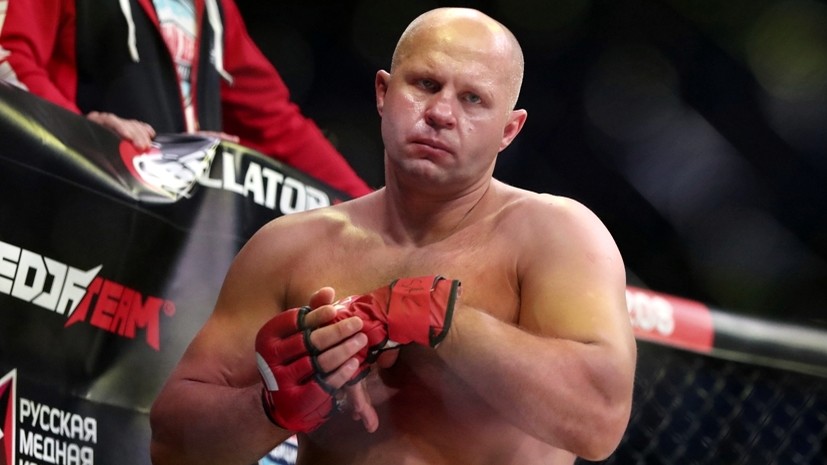 The next fight of Fedor Emelianenko is still one of the most discussed topics in the world of mixed martial arts.

The Last Emperor has one fight left under his current contract with Bellator, which will most likely be his last in his career.

And although the legendary fighter himself expressed hope that in his farewell fight he would get the opportunity to compete for the title of the second largest MMA promotion, there are other options.

One of them was voiced by Eagle FC owner and former UFC lightweight champion Khabib Nurmagomedov at a press conference in Miami.

During an event dedicated to the upcoming Eagle FC 47 tournament, Nurmagomedov said that he would like to arrange a battle between Fedor Emelianenko and Junior dos Santos.

The former king of the heavyweight division left the UFC in March 2021 and will make his debut in a new organization 14 months later.

On May 20, the Brazilian will compete with another ex-fighter of the Absolute Fighting Championship, Yorgan de Castro.

“If dos Santos wins, I really want to organize a fight with Fedor Emelianenko.

But first he needs to focus on the duel with Yorgan, as he is a very tough opponent.

I want to talk to my friend Scott Cocker as Fedor is under contract with Bellator.

I don’t know where they plan to use it further, ”Khabib said during a press conference.

At the same time, Nurmagomedov believes that there are enough grounds for a meeting between Emelianenko and dos Santos.

According to him, both are legends of mixed martial arts, and their duel could be a highlight of any tournament.

These guys have been the epitome of MMA for a long time.

In my opinion, Fedor is the greatest fighter of all time.

Junior was the UFC heavyweight champion for several years.

I think both the fighters and the fans deserve it (such a fight. - RT ).

Their confrontation also seems very interesting to me, ”Nurmagomedov added.

Dos Santos, who was at the same table with the Russian, reacted rather violently to his words and admitted that he had long dreamed of the opportunity to share a cage with the Last Emperor.

As Junior said, he grew up fighting with Emelianenko and treats the veteran with great respect.

It was a magical time for the MMA world when he had these incredible fights with Big Nog (Antonio Rodrigo Nogueira).

I wasn't performing myself at the time, but I was a big fan of them.

Since I also trained with Nogueira, it was kind of a dream for me to fight Fedor, the greatest achievement that I would like to achieve in my career.

So the news that it might be possible now is just amazing,” said dos Santos.

In the world of MMA, fights between fighters from different promotions are rare, but attempts to provoke them are quite common.

Earlier, the Russian ACA approached the leading American leagues with a proposal to bring together the strongest representatives in a joint tournament, and Bellator President Scott Cocker himself wanted to arrange a common show with the UFC.

He voiced this idea in August 2021, when he was ready to field the newly minted featherweight title holder AJ McKee, and last spoke about this in April 2022.

The functionary indicated his interest, but stressed that Dana White is unlikely to do this.

And the latter can be understood: the UFC is by far the leader in the mixed martial arts market and is not interested in promoting other promotions at its own expense.

A joint tournament with Bellator will give little to both the head himself and the company, but reputational losses can be quite serious.

Until now, there is an opinion in the MMA world that all the strongest perform in the championship, and a series of defeats from representatives of another league can seriously damage the reputation.

True, in the case of a possible confrontation between Emelianenko and dos Santos, the situation is slightly different.

If Bellator and Eagle FC limit themselves to this fight and do without a match confrontation, then they risk nothing.

In this case, we will talk exclusively about the battle of MMA legends, and not the current champions, whose performance can be used to judge the level of the entire promotion as a whole.

Perhaps that is why Cocker did not remain silent, but immediately reacted to Nurmagomedov's statement.

On his Twitter page, Scott thanked Khabib for the offer and expressed his desire to speak with him in person next week.

However, it is difficult to say how much the potential battle with dos Santos is interesting to Emelianenko himself.

In late April, he announced his desire to fight for the heavyweight belt in his farewell fight and expressed the hope that Ryan Bader would still hold the title by that time.

In May there will be a duel between Cheick Kongo and Ryan Bader, with one of them I would like to fight.

I wish it was Bader.

The fight may be at the same tournament with Vadim Nemkov in August, ”TASS quoted Emelianenko as saying.

In this case, he could not only leave on a high note, but also take revenge on the American for a crushing defeat in January 2019.

Then the rivals met at the final stage of the Bellator Grand Prix, and the fight lasted only 35 seconds.

The Russian missed a left hook and allowed his opponent to finish off.

“When I was preparing for the finals of the heavyweight Grand Prix, not everything went well, and there was a defeat.

I want to try again and finish on this note already ... Under the contract, this is the last fight, but I feel strong in myself, there is a great desire to fight for the belt, ”the Russian explained.

And so far everything is going according to Emelianenko's plan.

In early May, Bader made a successful defense in a duel with Cheick Kongo and retained the trophy, and he himself returned to the top 3 in the 120 kg division.

Now his teammate Valentin Moldavsky and Linton Vassel are above him, but the only real competitor for the title of the first contender is the Briton.

In January, Fedor's pupil already fought with Ryan and lost by unanimous decision of the judges, after which he no longer entered the cage.

And it is unlikely that matchmakers will give him two chances in a row to compete for the trophy.

Thus, the leadership of Bellator is faced with a dilemma: to arrange a long-awaited and high-profile revenge between Emelianenko and Bader, or to bring the current champion to Vassel, who is noticeably inferior to the Last Emperor in popularity.

Of course, from a sporting point of view, the Briton has much more reason to receive contender status.

Unlike Fedor, his winning streak is four fights, and in three of them he took the upper hand ahead of schedule.

At the same time, far from the last fighters acted as opponents.

Among them are PRIDE veteran Sergei Kharitonov, top 6 heavyweight Tyrell Fortune and former No. 1 Timothy Johnson.

The one that the Russian knocked out at a show in Moscow.

But if Bellator wants to make a truly large-scale event and earn solid money on it, then Cocker should listen to Emelianenko and let him face off against Bader again.

This fight is beneficial for the promotion not only from a financial, but also from a media point of view.

The revenge is guaranteed to become one of the main events of the year in the world of MMA and will gather a huge audience.

But Cocker admitted that he intended to carry out the legend as part of a grand event.

Will Emelianenko's confrontation with dos Santos attract the same attention?

It is devoid of background and has no background.

Perhaps it could be framed as an attempt by Junior to avenge a compatriot Fedor defeated in 2004, but that seems a bit far-fetched.

In this context, a meeting with Nogueira's younger brother Antonio Rogerio would be more logical, but he competes in the light heavyweight division and has never been a star.

And do not forget that Emelianenko has the right to vote in the choice of opponents.

According to Cocker, he personally expressed a desire to fight Johnson at a show in Russia.

It will largely depend on his decision who will become the next opponent.

And, choosing between Bader and dos Santos, he is very likely to lean towards the first.

Of course, if the matchmakers do not consider the ambitions of the Last Emperor excessive and do not veto a potential title rematch.

However, there are few reasons for this.

Even if dos Santos wins against de Castro, this is unlikely to bring him closer to the “dream fight”.

Now he frankly has nothing to interest Emelianenko, except for the opportunity to tarnish the reputation of the UFC a little and beat their former champion.

But the prospect of retiring as a Bellator belt holder looks much more pleasant.