Barça-Real Madrid in the Final Four: pending accounts, historical urgencies and a curse

At the Stark Arena in Belgrade they challenge again (9:00 p.m., DAZN), a mixture of anxieties and fears in a semifinal of the Final Four, pending accounts and that rumor left by the... 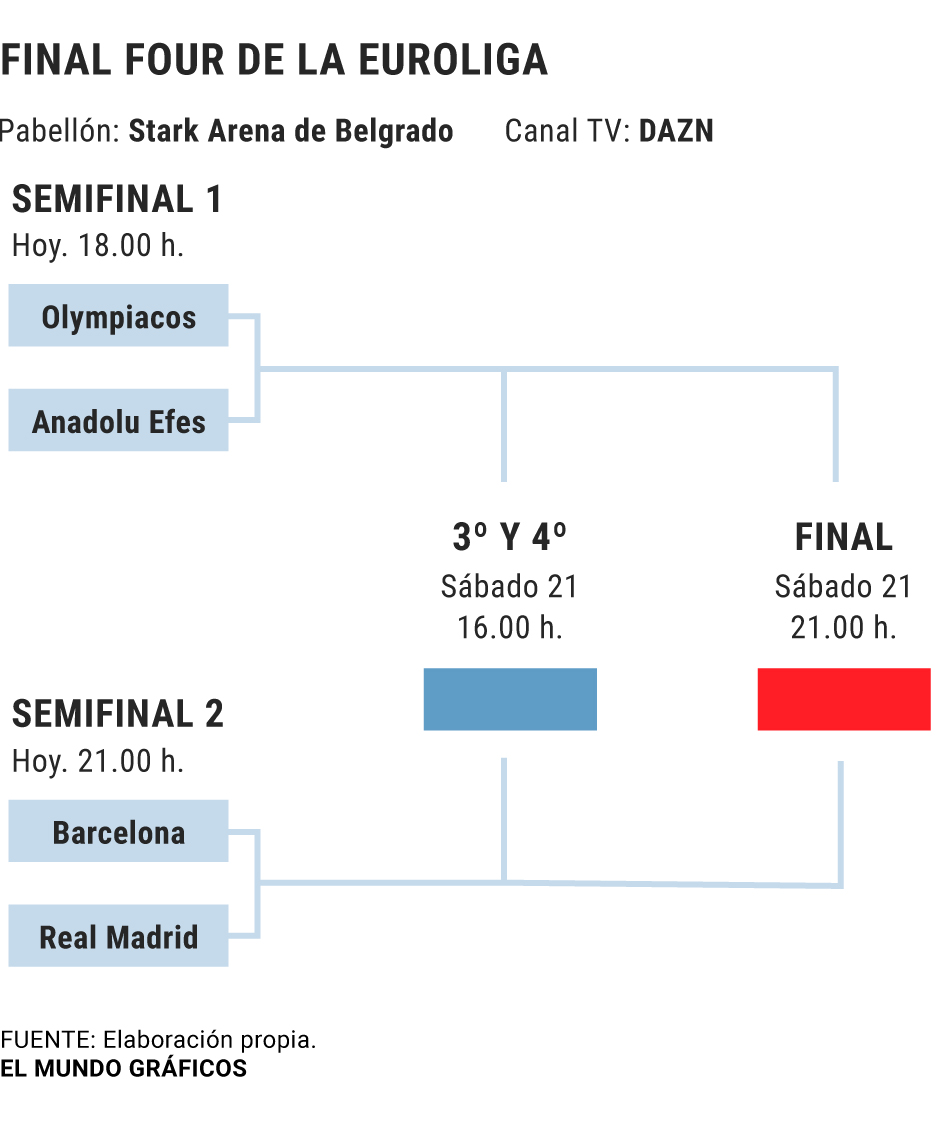 At the Stark Arena in Belgrade they challenge again (9:00 p.m., DAZN), a mixture of anxieties and fears in a semifinal of the Final Four, pending accounts and that rumor left by the battles against the eternal rival, wounds with scars .

Again Barça and Real Madrid, Real Madrid and Barça, as if fate had entangled them, condemned like the Roman gladiators before the beasts in the Coliseum.

History says it, like a curse, that the train crash only leaves victims, ephemeral smiles.

So it was in the three precedents on the shores of the Euroleague final, the winner was the loser two days later.

It happened back in 1996, when European champion Madrid, when the Euroleague was still a FIBA ​​competition, lost its throne in the semi-final in Paris, with

It didn't matter, because on the way back, Vrankovic

Again in 2013, although in London the bruised would be Madrid, who collapsed in the final after against Olympiacos.

Like the last time, a year later, in Milan.

Although here the script had one more compliment: white beating in the semifinals, painful defeat in the final against Maccabi and, days later, ACB for Barça in the most difficult moments of

But the past doesn't matter, they all say, and destiny cannot be avoided, although on the other side Anadolu Efes and Olympiacos rub their hands (the first semifinal, at 6:00 p.m., DAZN).

What counts is the hunger and the bills to settle.

Many have Madrid with

, the man who came to change an era, who has defeated Laso in the last five games until he derailed his team like never before, in 11 of the 14 played since he arrived at Barça as coach ( in his two stages as a player the balance is not bad either: 12-7).

That to Saras, who intuited his own weaknesses in a quarterfinal series against Bayern in which nobody thought he could exhaust the fifth stake, worries him.

"They are getting hungrier and we have to match it," he warns, making the case just for the precedents: "I don't think you can forget what happened, you have to learn from it.

Because they come with the favorite band that these figures grant, the first place in the regular season and the thunder of a squad that has recovered

in time -his brilliant substitute,

Kuric- , which is supported by an unapproachable

, by the wisdom of

-the only name Laso complimented in the previous one: «He is a point guard who controls the game a lot and generates a lot.

We have to try to lower his record »-, in the internal power of

and that yesterday, to round off, saw how the Euroleague awarded

the award of MVP of the course.

"I understand that no one believed a month ago, but we haven't stopped believing," proclaims Laso, also keeping an eye on his seventh Final Four out of a possible nine: only

have set foot on these grounds more times.

And again in Belgrade, in an appointment that has parallels with the 2018 title. Madrid attended both with doubts.

“Four years ago we played the semi-finals with CSKA and the final with Fenerbahce.

We weren't the big favourites, but

Everyone has to contribute and a player with three or four minutes on the court can be key”, warns the Vitorian, who recovers a Rudy Fernández who lost his father a few days ago and who keeps

Thomas Heurtel and a Trey out of the wheel.

who was the protagonist of that Tenth.

El Clásico in a whole semifinal.

Madrid is looking for its eleventh crown, Barça, who lost the last final, their third.

Continue in the gap after a decade of lasism or throw down the change of cycle once and for all.

And with the pressure from the band, also at the club level.

For the azulgrana, the title that they have not achieved since 2010 would be the support of a year of football miseries;

for Madrid, at the expense of what happens in 10 days in Paris, the possibility of a historic double.