From July 21, 2021, when she officially joined the Celtics Women's Football Team, Shen Mengyu's overseas trip has gone through 300 days.   Shen Mengyu said that she is not a static person. So at the age of 19, when the opportunity came, she mustered up the courage to turn the idea of ​​studying abroad in her mind into reality.   Just like she played football with a group of boys since she was 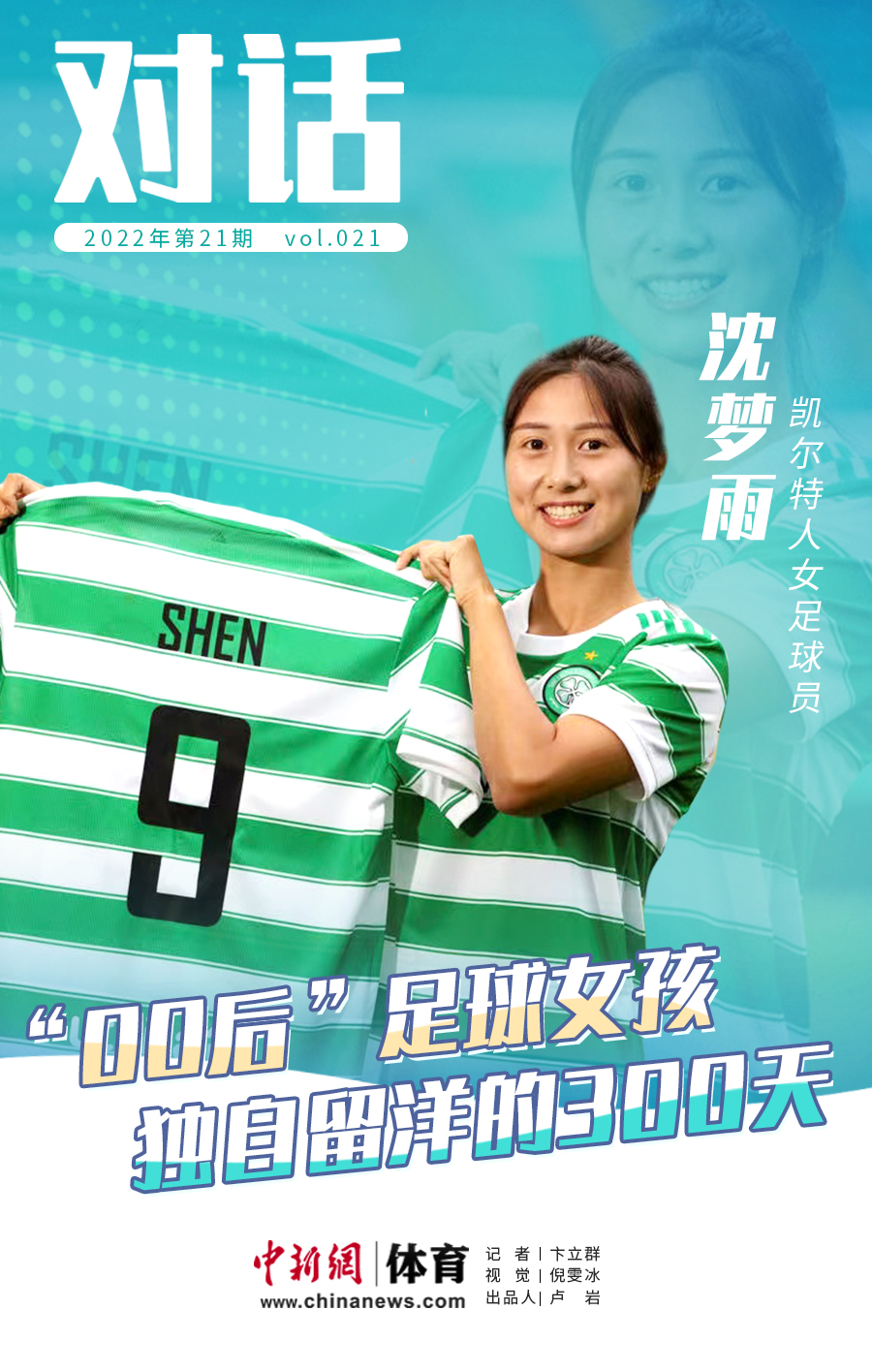 From July 21, 2021, when she officially joined the Celtics Women's Football Team, Shen Mengyu's overseas trip has gone through 300 days.

Shen Mengyu said that she is not a static person.

So at the age of 19, when the opportunity came, she mustered up the courage to turn the idea of ​​studying abroad in her mind into reality.

Just like she played football with a group of boys since she was a child, she finally insisted on pursuing her dream and chose the path of professional football.

During the 300 days abroad, Shen Mengyu experienced loneliness and confusion when she first arrived abroad, and she also had self-doubts under the influence of "drilling the bull's horns".

Of course, there is also the joy of winning the League Cup with the team, playing at the Park Stadium, and the growth of "playing lightly".

China-Singapore Sports: I remember you wrote when you celebrated winning the championship before: "Thank you for being away from home and working hard for 132 days".

Is there a lot of bitterness behind it?

When I'm abroad, I sometimes feel homesick and feel a strong sense of loneliness.

Usually because of the jet lag, I can only make time to video with my family and friends, and I feel sad for a while.

When you were in China before, everyone would think that you were a little sister and would take care of you sometimes.

But after I first went abroad, many things were unclear, and I left my comfort zone again. I arrived in an unfamiliar environment and needed to adapt again, which made me really confused.

There are no family members and friends around who can help you, and you need to take care of everything by yourself.

After I came here, I had a problem with my mentality, which led to a bad state.

I'm quite harsh on myself, and sometimes I like to get to the bottom of things.

For example, I want to do well, but I feel very frustrated after losing the ball and making mistakes on the field.

Thinking about it now, I was thinking too much at the time, always striving for perfection. In fact, it would make me play badly. Later, I felt that it was better to play lightly.

During that time, my teammates encouraged me, and I talked to the head coach.

Everyone said to me: "In fact, you are very good, really don't doubt yourself".

Later, I gradually came out, which is also a kind of growth.

Shen Mengyu (second from left) celebrates winning the League Cup with his teammates.

China-Singapore Sports: It's been 10 months since you studied abroad. Have you fully adapted to the life of studying abroad?

Compared with the beginning of studying abroad, what aspects have changed a lot?

Relatively speaking, I will get used to it.

When I first came, I didn't even know how to take the train or bus, or where to buy food.

Now that I am a little familiar, I have no problem with the basic communication with my teammates, and I am more integrated into the life here.

My relationship with my teammates is also better.

Because I'm not the kind of "social cow" person, I still feel a little overwhelmed when I arrive in a new environment.

However, it has now been played with everyone.

I feel very lucky to be able to come here in the first year of studying abroad.

I got a lot of help and my teammates are very friendly.

For example, when there are new tactical arrangements and training items, they will look at me and ask if I understand.

If they don't understand, they ask the coach to repeat it, or they do it first and explain it to me to make sure I'm clear.

Shen Mengyu (first from right) celebrates with his teammates.

My teammates also supervise my English learning and ask me every day, "What did you learn today?" Sometimes they teach me some words and expressions.

Also, when the Chinese New Year was celebrated, I invited my teammates to my house and cooked them a table of Chinese food, including braised pork, shrimp, tiger skin eggs, etc. There are quite a few varieties.

I also have to thank the food bloggers of major platforms. Many dishes are now learned, and I have been busy for about two hours.

I also received gifts from my teammates, including a painted tiger, and Happy New Year written in Chinese, etc. I spent a very different Spring Festival abroad.

Shen Mengyu celebrates with his teammates.

China-Singapore Sports: What other experiences have left a deep impression on you while studying abroad?

We played a game at the Park Stadium, the home stadium of the Celtic men's football team. I was very impressed, and I was very excited at the time.

I remember a month before the game, when everyone started counting down.

We've played at other courses before, we've never played at the Park Course.

When I heard that we can play in this stadium before, everyone's first reaction was: "Really?" Then they asked: "Who will I play with?" It seems to have said before that there is only one game played in this stadium this year. So everyone cherishes and looks forward to it.

The stadium is huge and can accommodate a lot of fans.

We had about four or five thousand spectators that day, a lot more than usual.

There were drums and gongs and drums, and the whole show didn’t stop. For us, this was a completely different treatment than usual (laughs).

Shen Mengyu and the Chinese fans at the scene.

China-Singapore Sports: What was it like to win the League Cup with Celtic Women?

What does this mean to you?

There was a lot of spectators in that final, and we celebrated with the fans after the game and danced our signature dance, which was a great feeling.

At that time, it was only a few months after studying abroad, and I thought it was a very good start.

This championship is also an incentive to want to win all the games that follow.

China-Singapore Sports: Are there often Chinese fans abroad to cheer you on?

It does happen often. I remember a very lovely Chinese fan who came to every game before.

Later, when she was going back to China, she prepared a small book for me, which contained my photos from various time periods. She was very attentive.

My teammates were very envious after seeing it, and they joked with each other: "Look at other people's fans".

There are also many Chinese fans here who told me that whenever they are free, they will definitely come to the scene to support me.

A letter from a fan to Shen Mengyu.

China-Singapore Sports: I'm curious, how did you become attached to football when you were a child, and you embarked on the path of professional football?

Do you have a favorite player?

It happens that the primary school near my home is a football school with a strong football atmosphere, and many star players often come to the school to communicate with us.

I used to play football with a group of boys.

I really like the feeling of playing football, it's a good feeling to be in a team and everyone to work towards a goal and to celebrate when we win.

Later, I discussed with my parents about the career path. My dad was more rational. After analyzing some aspects for me, he let me make my own decision.

I especially like Modric. When I was young, I also liked to watch Wu Lei play football, when he was still in Shanghai East Asia.

At that time, I felt that Wu Lei was amazing, he scored a lot of goals, and I felt that he was shining on the court. He was everywhere on the court, and he was an example worth learning.

I also admire his decision to study abroad, which requires courage.

China-Singapore Sports: What kind of opportunity did you choose to study abroad?

Brave to take this step?

The idea of ​​studying abroad appeared in my mind very early. I'm not the kind of person who stays the same. The Celtics just gave me this opportunity. I think I can give it a try.

Before studying abroad, I discussed the difference between studying abroad and playing football in China with my sisters in the Shanghai team, and carefully analyzed the pros and cons.

At that time, my sisters also said that there is nothing that young people dare not try, and they must dare to do it when they are young.

However, I still want to say that studying abroad is not for everyone. Before taking this step, you must think about what you want and then make a decision.

For me, physical confrontation is the aspect that I am lacking. The intensity of the league here is very high, so I want to try it out and make up for my lack.

China-Singapore Sports: What are your expectations and plans for the future?

No one doesn't want to wear "China Red", and hope that they can wear the uniform of the women's national football team to compete on the field.

However, there is still a certain gap between myself and my sisters. The premise of realizing this wish is to further improve myself and continue to work hard!