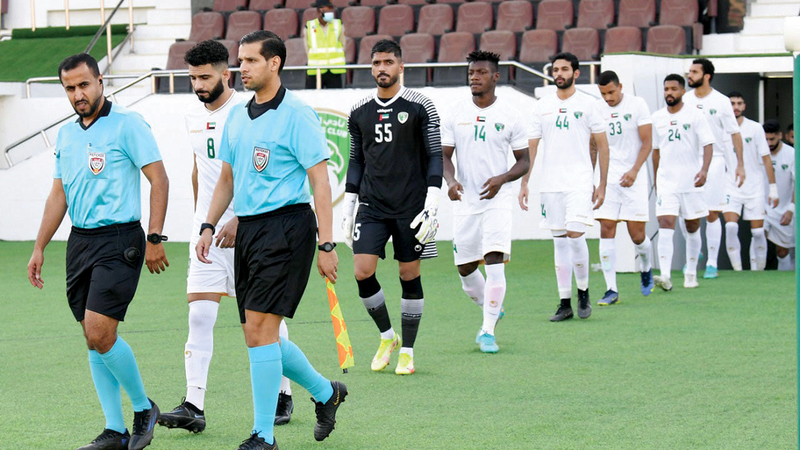 Khaled Obaid: Weak competition in the amateur league is not the only reason behind this phenomenon

"Al-Suqur" officially relegated to the amateurs after its score was frozen at 10 points in the last place.

The Emirates team continued its rapid visits to the ADNOC Professional League, and was relegated again in the same season in which it qualified from the amateur league.

The "Falcons" lost in the 24th round of the ADNOC Professional League by Al-Orouba 1-0, to officially drop to the amateurs, after its balance was frozen at 10 points in the last place, seven points behind the holder of the penultimate position, Al-Orouba, and eight points Al Dhafra ranked 12th.

The Emirates team became the number 10 victim in the list of "downward rookie", which has not missed the ADNOC league since the application of the professional system.

The Falcons rose for the first time in the 2009-2010 season with Baniyas, but fell in the same season.

After a season spent in amateurs, the team returned to ascend again in the 2011-2012 season, with Ajman, and could not stand in the professions to return to the first division again.

The 2013-2014 season was exceptional in the team's history in the professional league, so it rose to remain for an additional season after occupying 11th place in the general standings, but relegated in the following season until it returned again in the 2017-2018 season with Ajman, but relegated in the same season.

The Falcons team benefited from the decision to increase the number of ADNOC Professional League clubs to appear in the 2018-2019 season, and ascended the following season, but the league championship was canceled due to the “Corona” pandemic, and the ups and downs were canceled this year.

But the Emirates team succeeded in returning to the professional and participated in the current season, without continuing as it used to.

The former director of the football team at Al-Nasr Club and sports analyst, Khaled Obaid, attributed the repeated appearance of the theory of the descending rookie to the absence of real competition in the amateur league, which does not qualify the rising teams to compete and appear strong among the adults.

Khaled Obaid told "Emirates Today": "Weak competition in the amateurs is not the only reason, but there are many other reasons, most notably the absence of strategies for the emerging clubs, as they did not set a clear policy for them among their goals in the amateur league, and then in the professionals, and this matter It requires a better policy with bringing in high-level players who have the ability to play with the professionals.”

He added, "What happens is that these clubs are dispensing with many of their players who have moved up the team, and contract with other players, whether they are citizens or foreigners, which makes them lose the homogeneity required to play at this high level in football."

Khaled Obaid said: "We cannot overlook the financial aspect, which has a significant impact in terms of the ability to attract players at the same level in the professional league, and therefore the emerging teams are affected a lot and contract with players less than the level that achieves their ambitions to survive."

He pointed out: «The Emirates team was an example of such problems, as it started its season with the absence of a board of directors, and dispensed with several players who contributed to its rise, and contracted with sub-standard players, especially from foreigners, in addition to the lack of technical stability by taking on more than one coach throughout the season. ».

To view the top scorers, team standings and results of Round 24,