The “foreign whistle” in the league needs a comprehensive evaluation..there is no point in trying

Former football referees confirmed that with the end of the ADNOC Professional League competition, it became important for the Football Association to conduct a comprehensive and transparent evaluation of the experience of the presence of the foreign referee in the UAE League, and his participation so far in managing only four matches in the competition, noting that no 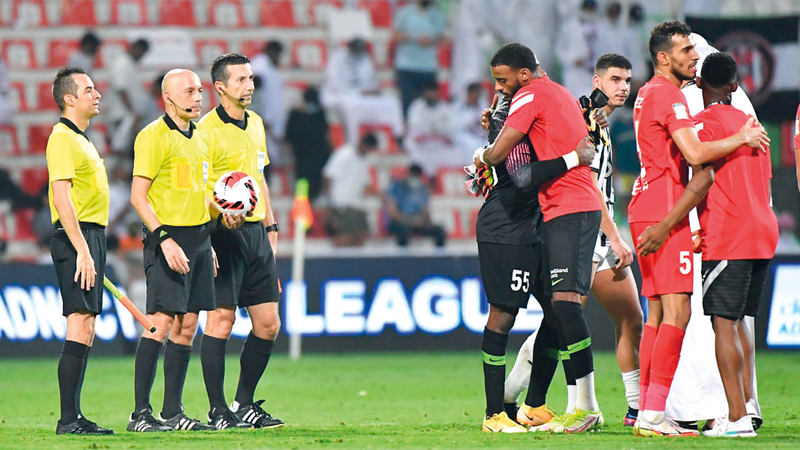 Stadium judges consider it a challenge to local arbitration and affirm:

The “foreign whistle” in the league needs a comprehensive evaluation..there is no point in trying

Former football referees confirmed that with the end of the ADNOC Professional League competition, it became important for the Football Association to conduct a comprehensive and transparent evaluation of the experience of the presence of the foreign referee in the UAE League, and his participation so far in managing only four matches in the competition, noting that no There was no point in using foreign arbitration to manage matches in the local league, and that the sports street was convinced of the futility of this experiment, considering that the matches led by foreign referees could have been managed easily by local referees, pointing to the distinction of a young Emirati arbitration staff who He led the last Pro Cup final between Al Ain and Shabab Al Ahly, while others stressed that the experience was useful and a good addition.

They told "Emirates Today": "The experience of the presence of the foreign whistle in the UAE league needs to be evaluated objectively from all sides, especially since foreign referees participated in the management of four matches, and this is a very small percentage out of a large number of league matches."

So far, four foreign referees have participated in managing only four matches in the ADNOC Professional League. Turkish referee Cüneyt Shakir led the Al-Ahly and Al-Jazira youth match in the seventh round of the league, and German referee Tobias Steller managed the Sharjah and Al-Wahda match in the ninth round, while Dutchman Danny Makele led the Al-Ain and Al-Wahda match. In the 19th round of the league.

A member of the former referees committee in the Football Association, former international referee Salah Amin, confirmed that the experience of the presence of the foreign referee did not provide any addition to the local league due to the fact that foreign referees participated in managing a very small number of matches “four matches” only out of a large number of matches.

He added, "I did not see any addition to foreign referees during the matches in which they were hired, and the national referees could manage these matches."

He explained, “I think that the local referees were up to the responsibility, and that the referees committee played its role in correcting the mistakes that were occurring previously, and reached a solution regarding the cooperation between the staff on the field and the video referee, so there was good cooperation between them this season, unlike last season.” .

He said, “Responsibility for foreign rule has two aspects;

The first is that some clubs pressured the Football Association to bring them, and the other thing is that the Emirati arbitration gained from this experience, not the expertise, because the presence of the foreign referee in four matches did not add anything to him, but it was a kind of challenge for the young referees to prove that they are up to the responsibility ».

The former football referee and technical analyst for referees Ibrahim Al-Muhairi stressed that it cannot be said that the experience of foreign referees participating in the local league has succeeded by 100%, since foreign referees have managed only four matches, and this is considered a small percentage.

He explained, "The experience is not considered successful in the full sense of the word, but in the four matches that were managed, there were some positives, as well as some negatives. We must not forget that the video referee technology (the mouse) contributed to the success of some matches."

He added, "With all due respect to all opinions in this regard, it is not possible to evaluate the experience of a foreign referee through only four matches, so I cannot judge whether the experience was successful or unsuccessful, but it needs more time before judging it and knowing the extent of its benefit, and whether The benefit of it is the exit of matches in which foreign referees were used to safety, knowing that there are many matches that came out to safety with Emirati referee teams, and the evidence for this is that the League Cup final, which was held recently between Al Ain and Al Ahly youth, was led by a new and small arbitration staff in age and out of the match to safety.”

He pointed out that if the financial cost was less, many clubs would have used foreign arbitration in managing their matches.

He added, "What I liked most about the experience of using foreign referees is the speed and stability in making arbitral decisions, and allowing players to friction and compete."

4 foreigners appeared in the league

1- Turkish Cüneyt Şakir .. He managed the match between Al-Ahly and Al-Jazira youth.

2- The German Tobias Steller .. he managed the match between Sharjah and Al Wahda.

4- The Dutchman, Danny Makele, managed the Al-Ain and Al-Wahda match.