Klopp raises doubts about the extent of injury to Salah and Van Dyck .. and Hasenhuttl: Liverpool is the best team in the world

Liverpool manager Jurgen Klopp has raised doubts about the extent of injuries to Mohamed Salah and Virgil van Dijk ahead of Tuesday's Premier League match against Southampton, and days before they face Real Madrid in the Champions League final. 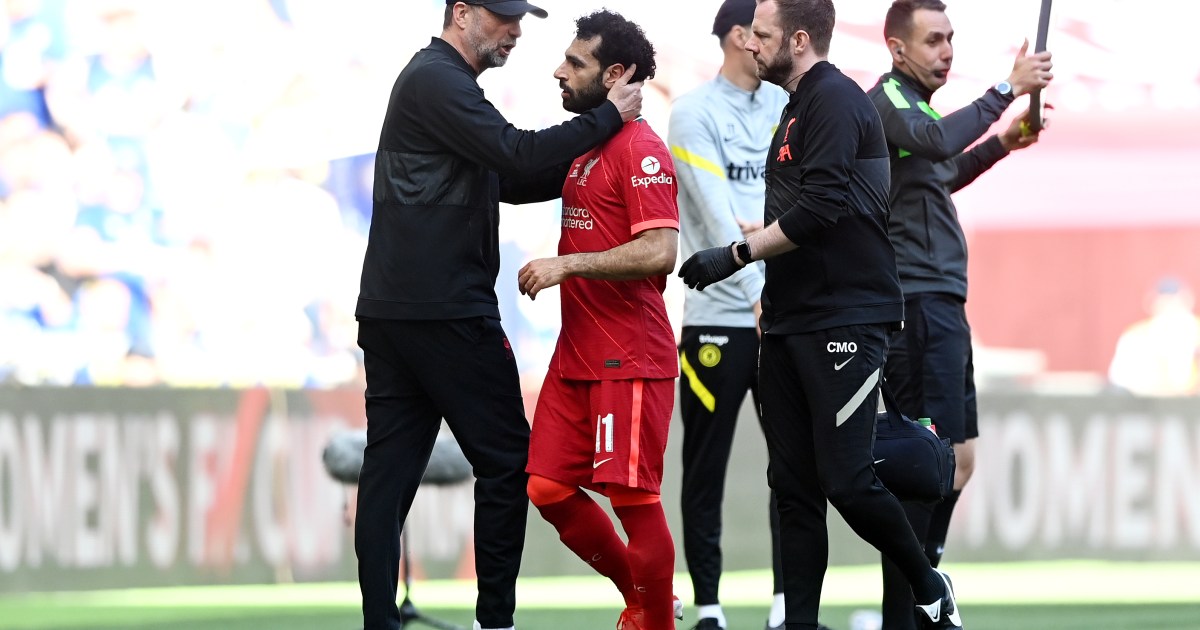 Liverpool coach Jurgen Klopp said today, Monday, that his team is still evaluating the readiness of Mohamed Salah and Virgil van Dijk before playing at Southampton in the English Premier League on Tuesday, as he will try to reduce the difference with leaders Manchester City to one point in the hope of losing City In his last match.

Striker Salah and defender Van Dijk went out during the FA Cup final on Saturday against Chelsea, before Liverpool won the penalty shootout and won their second title of the season.

"The evaluation is not over yet because we only played 120 minutes two days ago," Klopp told a news conference. "We have a lot of decisions."

"Those extra 30 minutes made a big difference... We will have to make changes, I don't know how many."

Klopp added that defensive midfielder Fabinho, who missed the victory over Chelsea due to a knee injury, will remain away against Southampton, and explained that "his recovery is going well, but he will not participate tomorrow."

Liverpool are four points behind champions City with two games remaining, but Klopp said he did not expect Pep Guardiola's side, who drew 2-2 with West Ham on Sunday, to drop more points when they host Aston Villa next week.

"There is a chance (to win the league), but is there a big chance? I don't know the last time City lost points in two consecutive games," Klopp said.

"Aston Villa plays in the middle of the week as well (at home against Burnley) which is something he's not used to, so I don't expect (City) to drop points there, but that doesn't have any impact on our game tomorrow. In an ideal world, we'd go to the Tour." The last one by one point.

Salah and Firmino > Majed and Yassin 😁

This duo shined clearly during our match against Southampton in 2018 📆#Southampton_Liverpool pic.twitter.com/FVph1RXlPt

Hasenhuttl: Liverpool is the best team in the world

Southampton occupies 15th place with 40 points, after achieving one victory in 10 matches, moving away from the top half of the table.

Ralf Hasenhuttl's team won at home to Liverpool last season, and the Austrian coach said he would look to repeat the result and leave an imprint in the title race this season.

"It's great that the Premier League has such a tight title race," Hasenhuttl said. "Everyone is excited about this fight and we are now part of this duel. Now it's up to us to show that we can compete against a great team."

"I didn't win much against Jurgen, so it was a special moment for me, we have a similar way of playing football and a lot of respect for each other."

"We are facing the best team in the world at the moment, as long as Jürgen believes he still has a chance to win the league, he will strive to achieve it with all he has," Hasenhuttl added.