AC Milan took a big step towards the title by beating Atalanta, but Inter are still on the heels. In England, Manchester City missed the opportunity to claim the title by being held back by West Ham.… 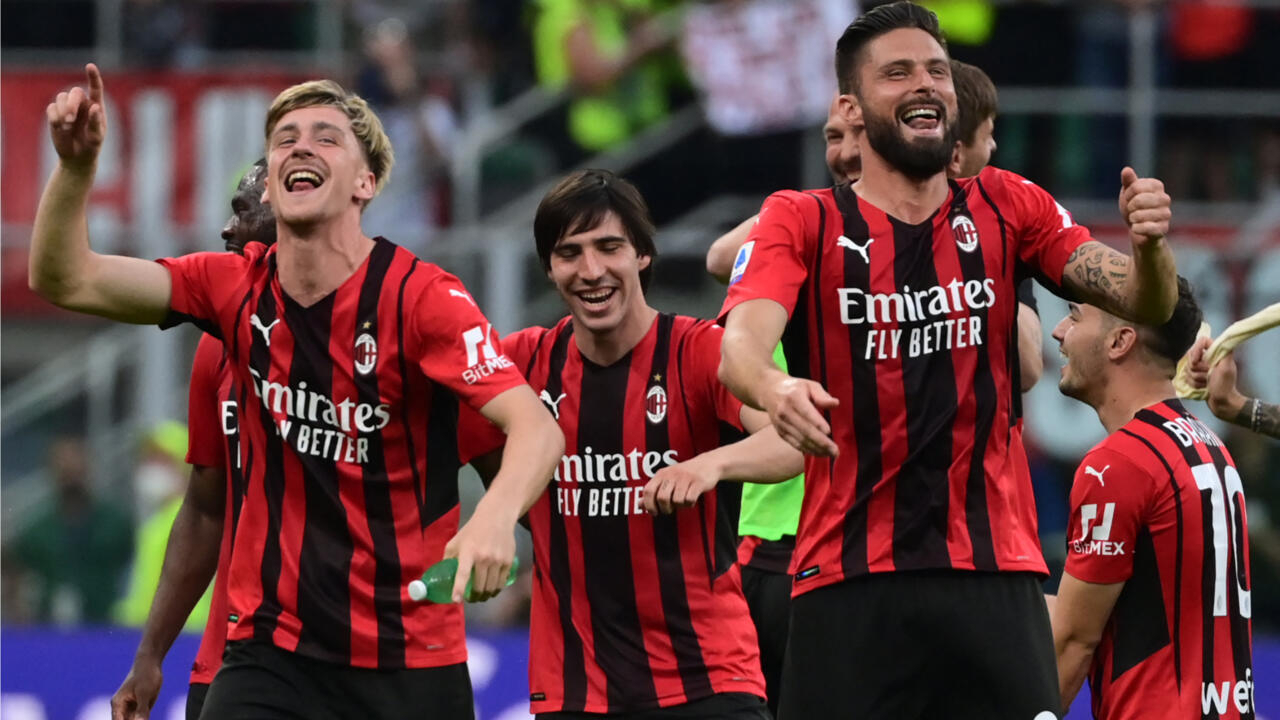 Serie A: AC Milan touch their first scudetto since 2011

The suspenseful battle between AC Milan and Inter Milan for the awarding of the scudetto will not know its epilogue until the last day of Serie A, in a week, after the victory Sunday evening of the Nerazzuri in Cagliari (3 -1).

With this success, Inter Milan (2nd) remains two points behind the leader AC Milan, winner at the end of the afternoon from Atalanta Bergamo (2-0).

Due to a particular favorable difference, the Rossoneri need just one point away from Sassuolo on the 38th and final matchday to be assured of a 19th league title, regardless of the outcome of the match. 'Inter at home against Sampdoria.

Leipzig won its ticket to the next Champions League on Saturday, on the last day of the Bundesliga, thanks to a 1-1 draw snatched in additional time on the lawn of relegated Bielefeld.

Leipzig finished fourth behind Bayern, Dortmund and Leverkusen, who will therefore also play in the Champions League group stage.

Qualified last year for the Europa League Conference, Union Berlin, the "small" club of the capital, has taken a step forward this season by taking 5th place, which will allow it to compete in the Europa League, in Compagnie de Fribourg, 6th and future finalist of the German Cup against Leipzig, on May 21 in Berlin.

Union overtook Freiburg on the final day with a 3-2 win over Bochum.

Also in injury time, VfB Stuttgart saved their place in the first division by beating Cologne 2-1.

The Swabians overtake Hertha Berlin, who will have to play the ascent/descent barrage (May 19 and 23) against the 3rd in the second division.

On the side of Stuttgart, we snatched its maintenance among the German elite at the last minute against Cologne.

Stuttgart scored in the 92nd minute to seal their survival in the Bundesliga.

Then a party broke out 🍾 pic.twitter.com/EVYV3nYZGS

Ligue 1: can OM lose everything?

With a ninth victory in a row against Brest (4-2), Monaco grabs second place, overtaking Marseille, overwhelmed by Rennes (2-0), Saturday during the penultimate day of Ligue 1 where Metz s seized the place of play-off.

After a crazy evening where the positions have changed a lot, everything will be decided on the last day, in the race for the Champions League as well as for maintenance.

And OM could well lose everything, ten days after their elimination in the semi-finals of the Europa League conference...

OM fell to third place, which sent to the Champions League play-offs, overtaken by ASM on goal difference (+25 against +21) before the last day, where Marseille, still under threat from their winner in the evening, receives Strasbourg at the Vélodrome, Monaco goes to Lens and Rennes to Lille.

To hope to hang on to Europe, Lens will need OM to win Strasbourg.

We arrive at a funny situation where Lensois and Marseillais will support each other as much as the other. #TeamOM 🔵⚪️ #RCLens 🔴🟡 pic.twitter.com/APyXQpKlWl

A victory at Bollaert, which would be their tenth in a row, and the princely club would return to the Champions League, after an irresistible sprint, like their crazy evening: down 2-0 just before half-time , ASM overturned everything with a hat-trick from Wissam Ben Yedder (24 goals), who came within a length of Kylian Mbappé (25 goals) for the title of top scorer.

OM will receive Strasbourg (5th), which holds the place in the Europa League Conference, and must take at least one point to stay on the podium, and do better than Monaco to regain the place of runner-up.

Liga: Sevilla snatch their ticket to the Champions League

Sevilla snatched a 1-1 draw against Atlético Madrid for the 37th and penultimate day of La Liga on Sunday, thus validating their ticket for the next Champions League, while Real Madrid were hooked 1-1 in Cadiz in two weeks of the C1 final against Liverpool.

For the last of Luis Suarez and Hector Herrera at the Metropolitano, the "Colchoneros" opened the scoring in the 30th minute by José Maria Gimenez, who headed off a corner struck by Yannick Carrasco with a header at the near post, but Sevilla equalized at the 85th thanks to an uncrossed header from Youssef En-Nesyri, following a cross from Oliver Torres.

Also note the beautiful reaction of pride from the Basques of Real Sociedad who, after being led 1-0 by Villarreal, overturned Unai Emery's plans to secure their place in the Europa League next season, condemning the "Yellow submarine" scrapped on the last day to ensure its qualification for the Europa League Conference next Sunday at Camp Nou against FC Barcelona.

A Barça which also secured 2nd place in La Liga after a poor 0-0 in Getafe.

Led 2-0, but with a missed penalty at the end of the match, Manchester City settled for a draw (2-2) at West Ham, while Tottenham overtook Arsenal in the race for the Champions League.

The duel between Citizens and Reds for the title almost experienced a new twist, but the point taken in London is still a small step closer to the title for the outgoing champions.

With a win, they would have been six points clear and with a goal difference well above that of Liverpool who have just two games left to play.

But they will be content with this lead of 4 units which leaves a small hope to the men of Jürgen Klopp.

The latter will go to Southampton on Tuesday.

In case of defeat, City will be crowned without playing.

Otherwise everything will be decided on the last day when City will host Aston Villa, coached by Steven Gerrard, emblematic captain of Liverpool in the 2000s, while the Reds will host Wolverhampton.

It was Steven Gerrard who would then offer the title to Liverpool!

"Now there is no more debate on goal difference, we just have to win our match and we will be champions," claimed Pep Guardiola after the match, who does not believe in a faux pas from Liverpool .

Tottenham did not miss their chance to take 4th place, qualifying for the Champions League by beating Burnley (1-0).

The Gunners will have to win in Newcastle on Monday (8:45 p.m.) before the last day when they will host Everton while Tottenham will go to Norwich, already relegated.