Mohamed bin Zayed, an inspiring leader of UAE and world sports, and special interest in "People of Determination"

For many years, His Highness Sheikh Mohamed bin Zayed Al Nahyan, President of the State, established firm principles in the UAE and international sports process, always focusing on the fact that the UAE is a homeland for tolerance and development, and that sport is a message of peace and love for all, as His Highness has always supported the sports movement in a 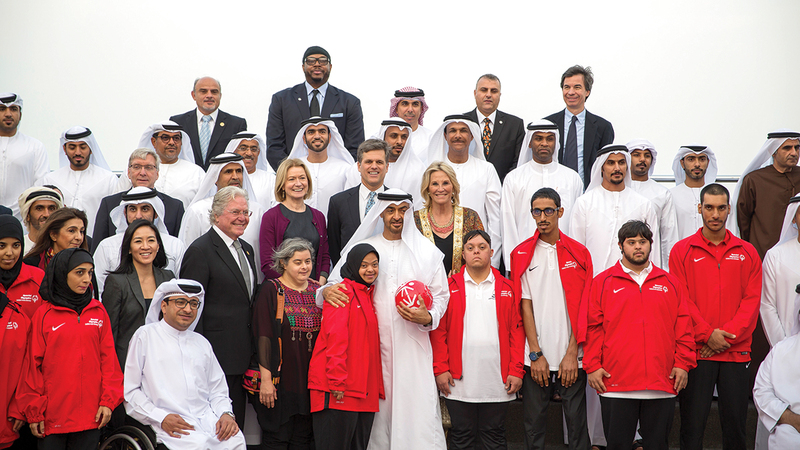 Mohamed bin Zayed, an inspiring leader of UAE and world sports, and special interest in "People of Determination"

For many years, His Highness Sheikh Mohamed bin Zayed Al Nahyan, President of the State, established firm principles in the UAE and international sports process, always focusing on the fact that the UAE is a homeland for tolerance and development, and that sport is a message of peace and love for all, as His Highness has always supported the sports movement in The state at all levels, especially the people of determination, who received a great deal of care and attention in a picture that depicted the finest meanings of humanity.

His Highness’s permanent patronage of sports and athletes came from a complete conviction that sport has become a measure for the advancement of nations and the civilization of peoples, and that youth are the mainstay of nation building, which laid the foundations for a huge sporting boom whose fruits reached the local and global sports arena.

His Highness was also keen to receive his sons who are accomplished in all sports, stressing in his speech to his sons athletes that the interest and support of the sports sector comes within the state's vision and plans to prepare Emirati champions in various sports.

The first supporter of UAE sport His Highness Sheikh Mohamed bin Zayed Al Nahyan, President of the State, has always been keen to support the nation’s athletes, coaches and administrators, and to meet with them personally, especially those with sporting achievements in various fields, in meetings that had a great impact in motivating athletes to He exerted more effort and effort in order to raise the flag of the state high in major international forums, including his reception in 2003 to the football team at Al Ain Club, crowned as the Asian champion, and finally, last March, His Highness received the Emirates Professional Cycling Team after the achievements they achieved during the years 2020 and 2021.

His Highness’s constant support also contributed to changing the parameters of Emirati sport, whether in the country’s possession of a giant logistical infrastructure and sports facilities of the highest international standards, the fruits of which were the transformation of the country into a first destination to host major international events, or in the gradual growth of the Emirati role because the country becomes the capital of global sports is not Not only in football, but in various sports, for the normal and people of determination alike.

His Highness Sheikh Mohamed bin Zayed Al Nahyan, President of the State, has for many years been a great supporter of the Special Olympics, which was manifested in its best form in Abu Dhabi's hosting of the Special Olympics World Games in 2019, and his diligent follow-up to the smallest details, and His Highness personally attending the opening ceremony accompanied by the athletes of this segment In addition to his attendance at sports competitions, in an event such as the largest and most successful in the history of the International Special Olympics, he carried with it a message from the UAE to the whole world about the importance of solidarity with people of determination, and empowering them in their societies to move them from the stage of accreditation to the stage of active participation and influence in society.

The UAE Special Olympics, with the continuous support of His Highness Sheikh Mohammed bin Zayed Al Nahyan, has become a model for international committees, federations and bodies in the extent of the importance of this segment of attention and care, in order to accelerate the pace of their integration into society.

The UAE is the capital of Jiu-Jitsu

Abu Dhabi, with the support of His Highness Sheikh Mohamed bin Zayed Al Nahyan, President of the UAE, and since 2012, has become the capital of Jiu-Jitsu, in an affirmation by His Highness of the importance of building the citizen element, and that sports are a healthy lifestyle and an opportunity for the people of the country to highlight their abilities, and raise the flag of the state failure in major international forums.

And with the support of His Highness, the sport of jiu-jitsu has succeeded in gradually becoming one of the most practiced games among the sons and daughters of the state, and the country has become a destination for the permanent participation of the elite stars of this sport, in the same way as to host the “Ju-Jitsu Arena” in Zayed Sports City from the 3rd to the 11th of December From last year's World Championships under the slogan "A Dream for Every Champion", in a tournament in which 2,000 male and female players from 65 countries participated.

The achievement of the athletes of People of Determination in the last Paralympic Games (Tokyo 2020) highlighted the UAE’s winning of three medals (gold, silver and bronze), through which they raised the state’s tally to 23 medals in the history of participation in the Paralympic Games since Sydney 2000;

Highlighting the extent of the great interest and support that the people of determination have received from the wise leadership in the country, and that the country’s global leadership in achieving societal integration is based on a well-established strategy, the fruits of which were directed by the Paralympic committees and international federations concerned with this category;

The request for the UAE to host the world championships, which was embodied by the Brazilian International Paralympic Committee President Andrew Parsons in November 2019, when he thanked His Highness Sheikh Mohammed bin Zayed Al Nahyan, for his support to the "people of determination", and that the role of the UAE leadership is a source of inspiration for this segment. In order to keep pace with the Paralympic movement around the world, especially since the UAE is a mainstay in the work of the Committee

Emirati sport, with the direct support of His Highness Sheikh Mohamed bin Zayed Al Nahyan, President of the State, has achieved many exceptional global achievements, among which is the fact that since 2009 the UAE has become a permanent station to host the Formula 1 World Championship, before it became in In the same year, the first Arab country to host the Club World Cup, and in 2010 it was the first country in the Middle East to host the “UFC” championship, and in 2022 the country was also the first Arab country to host the NBA League matches for the professional basket.