Manchester City have announced an agreement in principle on the transfer of Erling Haaland from Borussia Dortmund. According to media reports, the purchase of the Norwegian will cost a total of €250 million, and the contract will be for five years. What goals are pursued by the current champion of England, why did Real Madrid refuse the striker and whether the adaptation of the football player in Josep Guardiola's team will be delayed - in the RT material. 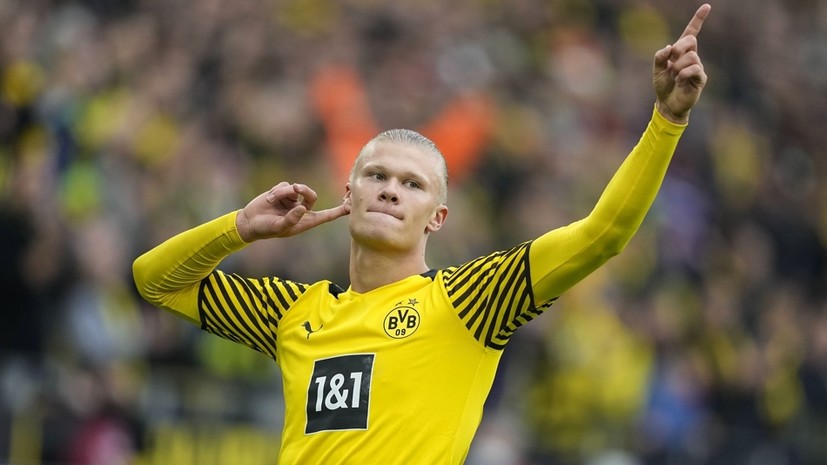 Over the past couple of years, the lack of a clean forward at Manchester City has become one of the most discussed topics in European football.

This was actively discussed during the 2020/21 season, when Sergio Aguero began to experience serious health problems, who for a long time remained the main option of the "citizens" in the attack.

After the departure of the Argentinean, this issue became especially acute.

Gabriel Jesus, although he coped with the task quite well, was never a super-productive scorer.

He gravitated more to the right flank, as a result of which almost all the attacking players of the team managed to try themselves in this role: Phil Foden, Raheem Sterling, Jack Grealish, Bernardo Silva and Riyad Mahrez.

And although such experiments and the lack of attachment to positions made Manchester City more variable and unpredictable for opponents, the absence of a scoring center forward hardly suited the coaching staff.

How else to explain the "hunt" for Harry Kane and the rumors about the possible acquisition of Cristiano Ronaldo, which appeared before the start of this season?

Of course, the Englishman was the main target, but the greed of Tottenham owner Daniel Levy did not allow the "citizens" to make one of the most anticipated transfers of the summer.

The Sky Blues were willing to shell out £100m for him, but the Londoners wanted £60m more.

However, even then it became clear that City seriously intended to close the hole in the center of the attack, and the last straw could well be a defeat from Real Madrid in the Champions League semi-finals.

Perhaps the club thought that it was the absence of their own Karim Benzema that prevented the team from Manchester from breaking into the final round of the competition, otherwise how to explain the decision to transfer Haaland just six days after the insulting loss to the “creamy”?

It's no secret that many top clubs in the Old World, including Real Madrid, Barcelona and even Bayern, were named among the contenders for the Norwegian.

It was reported that for this reason, the Munich team did not even begin negotiations on a contract extension with their long-term leader Robert Lewandowski, who decided to change his registration at the end of the season.

At the same time, a possible move to Catalonia looked the least likely.

Recently, the blue garnets have experienced serious financial problems, and the acquisition of an expensive Erling was beyond their means.

In any case, this opinion was voiced by the president of the Blaugrana, Joan Laporta, and the head of La Liga, Javier Tebas.

Nevertheless, another representative of the Examples was considered the main contender for the striker of Borussia Dortmund for a long time.

For several months, there were rumors that this summer Real Madrid would try to add two of the most talented footballers of our time to their squad at once - Haaland and Kylian Mbappe, but subsequently the Spanish champion withdrew from negotiations.

The exact reasons have not yet been announced, but there are several versions.

According to Cadena SER, it's all about the demand of the late Mino Raiola to write in Erling's contract a fixed €150 million release clause, by paying which any team could take him for themselves.

According to Marca, Real Madrid's decision was influenced by the situation with a potential transfer of Mbappe.

Allegedly, the leadership of the "creamy" did not want to embarrass the Frenchman with the appearance of a star competitor.

Among other things, the fantastic form of Benzema, named among the main contenders for the Golden Ball at the end of the season, as well as the colossal costs of buying Haaland, also played a role.

In total, it could cost Madrid €350 million, including payments to agents, lifting and the amount of the player’s personal contract.

Also, the high traumatism of the Norwegian did not go unnoticed.

In the current championship, he missed 95 days (16 matches) due to various injuries.

Were there better candidates for City?

According to The Telegraph, the star Norwegian will cost much less to the “citizens”.

In total, the transfer of Haaland will cost € 248.5 million - and this is taking into account the redemption of the football player's contract, his salary for five years and payments to agents.

Nevertheless, the amount still seems colossal, which raises the question of whether Manchester City had other options to solve the problem of the lack of goalscorers.

First of all, the purchase of Haaland speaks of the loss of hopes for the acquisition of Kane, who, in terms of his qualities, is much more suitable for Guardiola's game model.

Over the past few years, he has made tremendous progress and has ceased to be just a finisher, capable of acting solely on the edge.

Harry actually began to actively play the role of a false nine - shift to the middle line and participate in the development of attacks, and also pumped up the last pass great.

Thanks to this, last season he became the leader of the Premier League in terms of the number of not only goals, but also assists (23 + 14), and among the representatives of the top 5 leagues he lost only to Lewandowski (41 + 7) and Lionel Messi (30 + 9).

True, both could not boast of the same versatility.

However, Kane is not only tied to Tottenham with a contract until 2024, but he hasn't had a very good competitive year either.

Yes, then Harry spent two games more, but it is doubtful that in the remaining meetings he will be able to significantly improve his performance.

At the same time, Levy is unlikely to decide to give Manchester City a big discount, because of which his transfer could be more expensive than in the case of Haaland.

As for other possible candidates, it is really difficult for Erling to find a worthy competitor in terms of the combination of talent and skill.

In two years in Dortmund, he managed to score 85 goals in all competitions and not only break into the top 20 top scorers in the history of Borussia, but also spend one of the most productive seasons.

Last year, he scored 41 goals and was only four clean shots behind the Bumblebee record holder Lothar Emmerich.

But the Belgian not only cost Chelsea very dearly, but also failed the current championship.

The Nigerian and the Brazilian are not pleased with high performance.

The Ivorian, although he spent a year at a phenomenal level, did not play in the strongest Eredivisie, and his stage of his career in the Premier League was not the most successful.

Will Guardiola painlessly fit Haaland into the system?

Undoubtedly, Haaland has great potential, which he confirmed at Borussia, but in the Premier League he may well face certain difficulties.

The Norwegian is used to acting in free space and knows how to drag the ball to other people's goal at speed, so he was as comfortable as possible in Germany.

High pressing is extremely popular in the Bundesliga, and almost all teams play with a high defensive line, which makes football extremely open.

In England, things will be different.

Of course, opportunities to distinguish themselves after a lightning-fast counterattack will appear, but much less frequently.

This is due not only to the style of the opponents and the higher level of defensive performers, but also to the philosophy of Manchester City itself.

Guardiola's men are traditionally the leaders in terms of possession percentage, and this season they have scored only two goals from counterattacks (the tenth result in the league).

It is unlikely that the Spaniard will decide to move away from his principles of building a game, even for the sake of such a talent as Haaland.

So far, everything indicates that the adaptation of the Norwegian at the Etihad may take a long time.

It's not just about Haaland, although he will certainly have to improve in a number of aspects, such as work without the ball, openings and fighting on the second floor.

Despite the outstanding size, the 194-centimeter forward rarely stands out after headbutts.

For example, among the representatives of the top 5 championships, he shares the 20th place (three goals), behind not the tallest Lautaro Martinez and Diogo Jota.

In addition, the experience of several players at once proves that it is not so easy to get used to the requirements of Guardiola.

The first season under the guidance of a star coach does not work out for Grealish bought for €117.5 million, and Bernardo Silva and Ferran Torres did not immediately shine before.

And these are examples of players who were much more suited to Pep's requirements.

With Holland, he will have to do more work.

But if Erling still manages to learn new things under the guidance of a mentor, and Guardiola can build it into the system with high quality, then Manchester City can become the hegemon of European football and finally add the Champions League trophy to their museum.

Until now, all they have lacked is a scoring striker who can consistently deliver more than 20 goals in a season and decide the outcome of any confrontation, and Haaland can solve this problem for years to come.

In July, he will celebrate his 22nd birthday.