Doubles of Glushenkov and Nicholson, penalties of Spertsyan and Miranchuk, removal of Grulev and Sorokin: what did the 28th round of the RPL remember

"Wings of the Soviets" defeated the houses of "Dynamo" in the presence of 32 thousand spectators and revived the intrigue in the fight for silver in the Russian Football Championship. For the first time under Paolo Vanoli, Spartak won two victories in a row, scoring three times by the 30th minute in Yekaterinburg, and Ivan Sergeev extended Zenit's unbeaten run to 17 matches, having distinguished himself for the tenth time this season. Lokomotiv snatched victory from Rubin thanks to an accurate penalty shot from Anton Miranchuk, and Krasnodar survived in Tula even after Yegor Sorokin was sent off. What did the 28th round of the RPL remember - in the material RT. 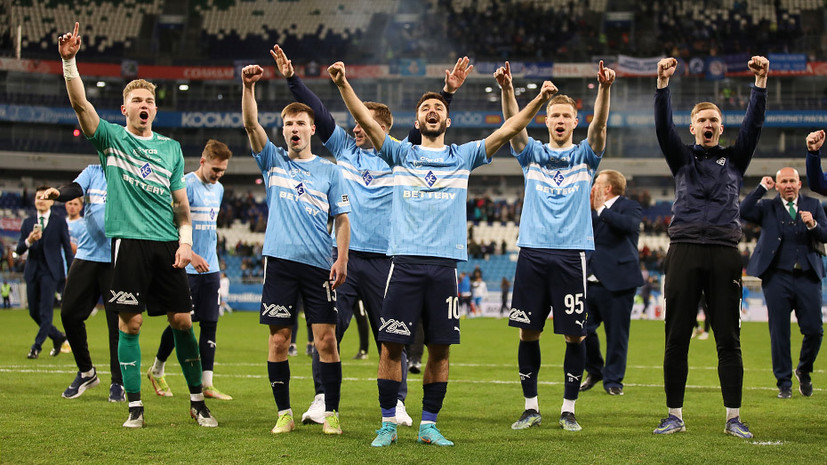 Goal extravaganza "Wings of the Soviets"

Wards of Sandro Schwartz continue to strengthen in the status of one of the worst teams in the final segment of the season.

If defeats from CSKA and Ural put an end to Dynamo's championship ambitions, then the fiasco in Samara may well cost them silver medals.

The Blue-and-Whites failed to score points in the third meeting in a row and allowed themselves to catch up with Sochi, which is in a state close to ideal.

The team of Vladimir Fedotov has not suffered a single defeat in the last six rounds, having won four.

Including, over the main competitor in the fight for bronze in the face of the army.

And this despite the fact that in the confrontation with the "Wings of the Soviets" at first nothing foreshadowed trouble.

Although Dynamo allowed Maxim Glushenkov to open an account already in the 22nd minute, they restored parity even before the break.

Arsen Zakharyan had a great cross from a set piece, and Fabio Balbuena made an irresistible header.

But things went wrong in the second half.

To its equator, the wards of Igor Osinkin upset Anton Shunin twice more, and then answered the exact blow of Vyacheslav Grulev with two goals.

Samarans defeated their rivals with a score of 5:2 and not only made their club an excellent gift for the 80th anniversary, but also inflicted one of the most sensitive defeats in the last ten years on the white and blue.

The last time they conceded five goals was in 2012.

Then Zenit acted as the offender.

Grulev himself subsequently managed to be noted with a minus sign.

In stoppage time, he received a second yellow card and was sent off for the first time in his career.

And after the final whistle, Sandro Schwartz followed suit.

The German mentor expressed dissatisfaction with the work of the referees, for which Vasily Kazartsev showed him a red card.

In turn, the attacking leaders of the Wings played an outstanding match and became one of its main characters.

Glushenkov scored the first double in the RPL, Sergey Pinyaev scored the fourth goal of the season, and Vladislav Sarveli and Anton Zinkovsky chalked up a goal and two assists.

Moreover, the latter for the ninth time helped his partners to distinguish themselves and became the sole leader of the race of assistants, overtaking Sebastian Szymanski.

If Dynamo frankly fails the end of the championship, then Spartak gradually comes to its senses.

And let a couple of victories are unlikely to brighten up the impression of a terrible season, but at least help to avoid a humiliating struggle for survival.

A couple of rounds ago, the wards of Paolo Vanoli risked finishing the championship in the zone of transitional matches, but at the end of the 28th round, they secured their registration.

And largely due to the success in the confrontation with the Urals.

Moreover, it was possible to remove all questions about the winner in fact by the 30th minute.

Shamar Nicholson scored a double in a quarter of an hour and took third place in the list of Spartak's top scorers in the RPL.

The Jamaican has five goals, only Quincy Promes (six) and Alexander Sobolev (eight) have more.

And this is especially impressive, because the Jamaican joined the team only in the winter.

A little later, the teammate's initiative was supported by Victor Moses.

The hosts had some great chances, but only one of them was able to convert.

Leo Goglichidze completed a spectacular slalom on the left flank with an accurate shot from outside the penalty area.

Thus, Spartak not only scored 39 points and climbed to ninth place in the standings, but also for the first time won two victories in a row in the RPL under the leadership of Vanoli.

This season, the red and white only once succeeded in this.

In late September - early October, they alternately took over Ufa and Akhmat.

Then Rui Vitoria was at the helm.

It is noteworthy that one of his main rivals helped Spartak to keep his place in the elite.

It was Zenit's victory over Khimki that made the Muscovites inaccessible to their current competitors and guaranteed their residence in the top division of the Russian championship.

In their last home match of the season, the St. Petersburgers took over with a minimum score, and Ivan Sergeev became the author of the only goal.

The best player of the team in April, according to the fans, scored five (4 + 1) points in the last four meetings and helped the blue-white-blue extend their unbeaten run.

The last time they lost to Arsenal was in the 11th round.

And although the confrontation turned out to be not the richest in bright moments, it was surrounded by many events.

Before its start, the former Zenit defender Yuri Zhirkov received a commemorative ball autographed by the current team players, and at the end of it, they, together with the fans, celebrated winning the fourth title in a row.

Some expected that on this occasion, Khimki would organize the so-called champion corridor for the Petersburgers, but in the end this did not happen.

But the fans hung out banners with congratulations to the former Zenit players - Serdar Azmun and Yaroslav Rakytsky.

True, this day was not the most joyful for Artyom Dziuba.

The striker appeared on the field only in the course of the second half and again failed to score effective actions, and even was booed by the stands.

It is possible that the reason for this was rumors about his unwillingness to renew the contract with Zenit and a possible transfer to Red Star.

The failure of Khimki in St. Petersburg and the home defeat of Nizhny Novgorod by Akhmat could greatly facilitate the task of maintaining a residence permit in the RPL Rubin.

If Leonid Slutsky's wards had scored points in the away match against Lokomotiv, they would have outperformed their competitors at least until next weekend.

But fortune again turned away from Kazan, although they looked no worse than the opponent aiming for a place in the top five.

If in the first half it almost did not come to sharp moments, then in the second there were plenty of them.

In the 50th minute, Alexander Lomovitsky scored after a penetrating pass through the center of Vitaly Lisakovich, who came on as a substitute, but Kirill Levnikov canceled the goal due to a microscopic offside, although on replay it might have seemed that at the time of the pass the midfielder's foot was further from the goal than Nair Tiknizyan.

Almost immediately, the Belarusian striker broke through to the gates of the hosts on the left flank and shot into the goalkeeper's area, but this time Lomovitsky did not have time to close.

After 20 minutes, Lisakovich himself effectively hit the crossbar in touch after Georgy Zotov's cross, but the referees again saw an offside position.

The railroad workers woke up closer to the end, Girano Kerk and Wilson Isidore had good chances to score in turns, who tried to catch Yuri Dupin by surprise with shots into the near corner from different flanks.

But the main character of the meeting was not destined to be him, but Anton Miranchuk.

Having missed almost the entire season due to injury, the midfielder calmly converted a penalty awarded for a foul by Vladislav Ignatiev.

He turned away from the ball at the moment Tiknizyan hit, but did not have time to press his hand to his body.

The ex-defender of Loko had a chance to improve in stoppage time, but his first shot from the penalty area hit a crowd of players, and the second one was above the goal.

Thriller with VAR views in Tula

Arsenal, which closes the standings, unlike Rubin, had no right to make a mistake.

And from the first minutes, the Tula team made it clear to Krasnodar that they were determined.

Already in the 19th minute, Kings Kangwa, who was not tall, opened the scoring in the match, successfully closing the feed from the corner of Sergei Tkachev.

Whether the Zambian midfielder was more convincing in the performance of free kicks, even before the break, the advantage of the hosts could become more significant, but in the first case he weakly struck right into the hands of Matvey Safonov, and in the second he hit the wall.

True, the experts discussed during the break not these episodes, but Maxim Kainov's tackle under Irakli Manelov in the middle of the field, for which Sergei Ivanov, after watching VAR, was obliged to show the culprit not a yellow, but a red card.

Came to the fore the chief referee with assistants and in the second half.

The southerners began to act more boldly, more often go to the stroke, and in one of the episodes, the courage of Eduard Spertsyan was rewarded.

Artyom Sokol was caught on the counter move, hooked the attacker and gave a reason to appoint an 11-meter kick into the goal of Mikhail Levashov.

The goalkeeper managed to unravel the plans of the top scorer of the guests and make a save, but as it turned out after a couple of minutes, he left the goal line at the last moment, which is prohibited by the rules.

On the second attempt, Spertsyan shot harder and more accurately, leaving the goalkeeper no chance and giving reason after the match to resent the president of Arsenal, Guram Adzhoev.

Although the Tula team had enough time and chances to snatch victory after the missed goal: Ayaz Guliyev hit on an empty net, Georgi Kostadinov cut the ball into the far corner from the goalkeeper's corner, Evgeny Lutsenko closed the partners' crosses twice, and Kangva circled the wall from a free kick after Egor Sorokin was sent off for foul of last resort.

Now the team from the armory capital of Russia needs to beat Ufa away and Ural at home, hoping for misfires from competitors in order to at least get into the play-offs.