Video- After Liverpool and Real Madrid qualified for the Champions League final.. These are the chances of Benzema, Mane and Salah to win the Golden Ball

With Real Madrid and Liverpool qualified for the Champions League final, the struggle for the Golden Ball awarded to the best player in the world raged between top scorers Karim Benzema, Sadio Mane and Mohamed Salah. 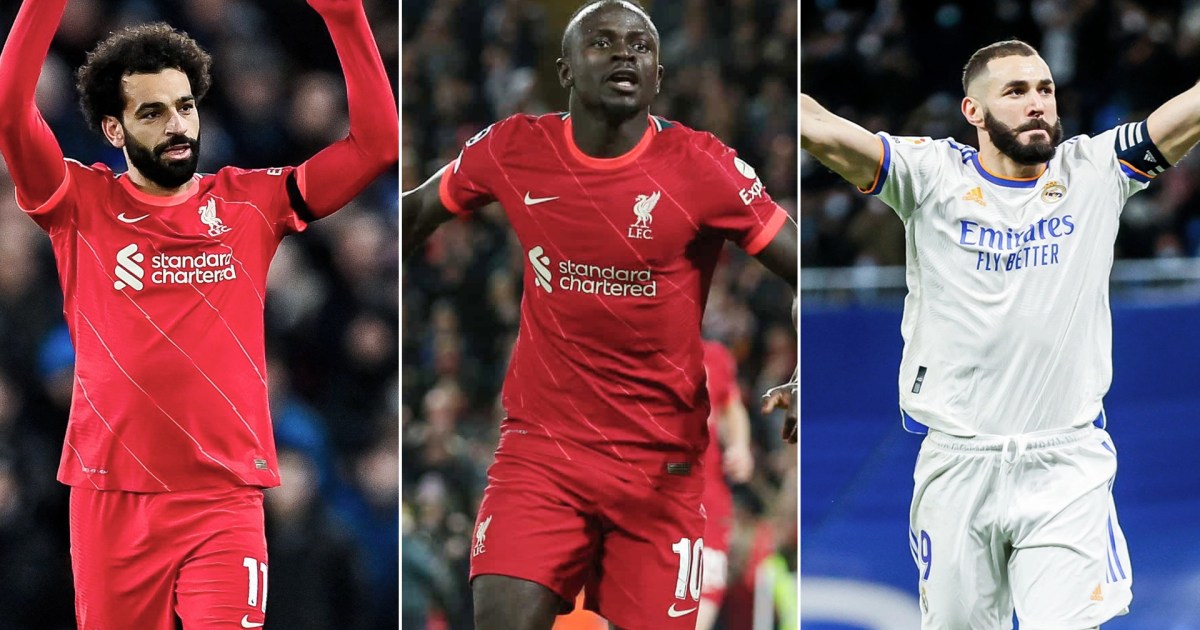 With Real Madrid and Liverpool qualified for the Champions League final, the struggle for the Golden Ball awarded to the best player in the world raged between top scorers Karim Benzema, Sadio Mane and Mohamed Salah.

Benzema after getting fouled in the penalty area, asking Rodrygo "You want?"

to give him a chance to complete the hattrick.

Benzema is currently the favorite to win the Ballon d'Or after his outstanding role in Real Madrid's victory in the Super Cup and the Spanish League, where he scored 43 goals for the royal this season, and also won the European Nations League with France last October.

Marks out of 10 for @Benzema this season!

But the situation may change, and Sadio Mane will win the Golden Ball, if he plays a role in leading Liverpool to the Champions League podium, especially since he has a great balance of achievements this season, as he helped the Reds win the League Cup.

Mane can participate in Liverpool's historic achievement by winning 4 titles this season, after the Reds qualified for the FA Cup final, in addition to the European Champions Final, and the team is only one point away from Manchester City, the Premier League leaders in the title struggle.

🇸🇳 Mané notched his 20th goal this season in the 1st leg 🔥

The Senegalese striker also excelled at the international level, leading his country to win the African Nations Cup last February for the first time in its history, and qualify for this year's World Cup in Qatar.

And both achievements were at the expense of the Egyptian team led by his teammate in Liverpool, Mohamed Salah.

Thierry Henry, the former French star, believes that "Benzema and Mane are his favorite candidates to win the Ballon d'Or," stressing that his compatriot Benzema is closest to the award except in one case, which is Liverpool's victory in the quartet this season, where Mane will greatly overtake him.

But the achievement that Henry refers to, Mohamed Salah, the top scorer for Liverpool, may be presented strongly to crown the Golden Ball, which witnessed a fundamental change this year as it became dependent on individual achievements greatly, as he approved granting it to the full season and not the calendar year as it was in the past, any season 2021-2022, not 2022, especially since the award ceremony will take place next October, i.e. before the World Cup in Qatar, which will start in November 2022.

Great reception and great finish from the Egyptian King 👏

On the other hand, Mane is ranked fifth in the Premier League top scorer with only 14 goals, and he is also far from Salah as the team's top scorer this season with 21 goals and 3 assists.

Despite Salah's superiority in terms of numbers, former Liverpool star Steve McManaman believes that Mane and Benzema are more deserving of winning the Ballon d'Or this season.

"He (Mane) won the African Cup of Nations and if he scores in the (Champions League) final as well, there are a lot of different scenarios, but it's great to see Benzema get his reward," McManaman said.

Some of salah's assists this season 🤌 pic.twitter.com/1bYPwHWOoR