Young coaches... the most convincing in the ADNOC Pro League

The features of the ADNOC Professional League began to change at the level of the bench, with the emergence of young coaches in more than one club, most notably Al Wahda, which used the services of French coach Gregory Dufresne, 38, and Al Ain, which is coached by Croatian coach Sergei Rebrov, 48, and Badr Al Idrissi. 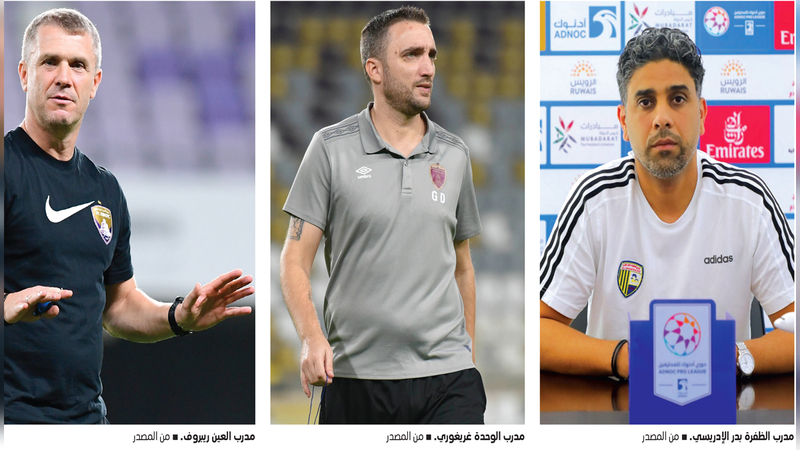 Young coaches... the most convincing in the ADNOC Pro League

The features of the ADNOC Professional League began to change at the level of the bench, with the emergence of young coaches in more than one club, most notably Al-Wahda, which used the services of French coach Gregory Dufresneis (38 years), Al Ain, trained by Croatian coach Sergei Rebrov, (48 years), and Badr Al-Idrisi, who He was recently appointed coach of Al Dhafra (42 years).

The three coaches were able to make major transformations in the league championship, becoming the most convincing among the remaining coaches.

Sergey Rebrov succeeded in bringing Al-Ain back to the fore after a lean season, in which the leader did not win any title last season.

Al-Ain is currently with Rebrov the first candidate to win the league title, five rounds before the conclusion, after he recently managed to beat Al-Ahly youth with a goal without a response, to maintain the seven-point difference that separates him from his closest pursuers Al-Wahda.

The leader has achieved amazing numbers in the league this season, by playing 21 games so far, winning 16 matches, drawing four and losing only one match, as the teams least exposed to defeats in the league.

Not only is Sergey Rebrov close to returning the league title to Al-Zaeem Castle, but the team is competing for the title of the Professional Cup, in which it will meet Al-Ahly youth next Wednesday.

Al-Wahda met with the French coach Gregory Dufrenes, who brought the club back to the fore after a disappointing start to the team, under the leadership of Dutch coach Tin Kat, who led Annabi in seven games, won two games and drew in five meetings, to assign the task to the 38-year-old coach, and a coach. Reserve in the club.

Gregory was able to make miracles with a team that is no longer a candidate for any title, and suffers from several technical and physical problems, but Gregory flickered the happiness of the owners, and led the team in 14 matches, winning 11, drawing in one match, losing two games, and winning 34 points .

The French coach was not satisfied with placing Al Wahda at the center of the competition for the league title, but the team with this coach became a party to the final match of the President’s Cup competition, in which it will meet Sharjah this month. Al Wahda also reached the semi-finals of the League Cup, and bid it farewell to Al-Ahly youth, after the coach’s decision to play the two meetings in the second row.

Continuing with the phenomenon of young coaches, Al Dhafra decided to venture with a young coach for the remainder of the season, and assigned the task to Moroccan Badr Al Idrissi, who came as a replacement for Brazilian coach Rogerio Micale, who was sacked due to poor results.

The Moroccan coach did not disappoint the hopes that were attached to him, so the spirit returned to the team’s performance, and discipline was evident in the players’ style on the field, so he made the team a distinctive form and style, after he had been hit by scoring sterility, and his defenses were like open streets, and reaching his goal was easy with The coaches, Mikali, and before him, the Syrian Muhammad Quwaid.

Al-Idrisi managed to lead his team to win seven points by beating Khorfakkan 4-1, and Ajman 3-0, and drawing with Ittihad Kalba 2-2, to move Al Dhafra away from the specter of relegation, eight points from Al-Orouba and nine points from the Emirates, the two holders of the penultimate and last positions.

Al Dhafra played superbly against Al Wahda and was tied with it in the last round, 2-2, before it conceded the goal of the loss with the fifth minute of the extended time of the match.

Under the leadership of its Moroccan coach, the team scored 11 goals in four matches, which is more than 40% of the goals scored in 17 matches.