“Novak is not the same yet”: how Rublev beat Djokovic for the first time and won the third ATP title in 2022

Andrey Rublev defeated Novak Djokovic in three sets in the final of the ATP 250 tournament in Belgrade. In the decisive set, the Serb was unable to provide worthy resistance to the Russian and lost dry - 6:2, 6:7, 6:0. For the 24-year-old Muscovite, this title was the third of the year and the eleventh in his career, while he beat the first racket of the world for the first time. According to multiple USSR champion Anna Dmitrieva, this triumph should also help Daniil Medvedev, who retains a chance to regain leadership in the ATP rankings, even recovering from injury and not going to the court. 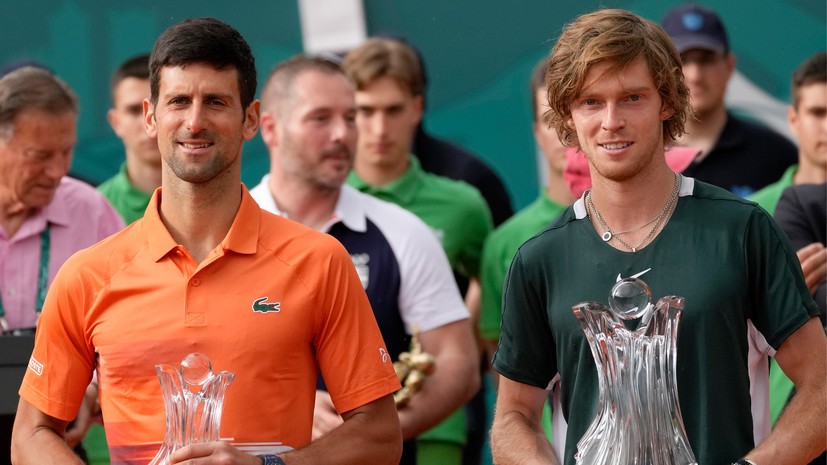 Andrey Rublev defeated the first racket of the world Novak Djokovic for the first time in his career and won the tournament in Belgrade.

For the eighth number of the ATP rating, this week was not easy psychologically, because on Wednesday it became known that the organizers of Wimbledon would not allow Russians and Belarusians to compete due to the situation in Ukraine.

The athlete was very upset because of what happened.

Trying to convince the British, he even offered to spend his prize money on humanitarian causes.

“I think we should have a choice whether we want to play or not.

If there was some kind of statement that we have to sign.

Or if they offered to donate prize money for humanitarian needs, to help suffering families, children, we would do it.

And in this case, the British authorities would have shown that they are for peace, that they want to help, ”Rublev said at a press conference.

The decision of the organizers of Wimbledon was not supported by the ATP and WTA.

Even there was information that the associations are considering the option of imposing sanctions against the British.

It is proposed, in particular, to deprive them of the right to play rating points in tournaments.

Tennis players themselves did not stand aside.

Almost everyone condemned the removal of Russians and Belarusians.

Weighty in this case was the opinion of Djokovic.

“I cannot support the decision of the organizers of the tournament at Wimbledon, it seems to me insane.

Tennis players have nothing to do with what is happening.

When politics interferes in sports, it does not lead to good results,” the leader of the world ranking said at a press conference.

Supported suspended athletes and spectators who attended the tournament in Belgrade.

So maybe that's why the Russians performed very well in Serbia.

Djokovic played against both.

And if Novak dealt with the 26th racket of the world quite easily, then he was not enough for the final.

The opponents confidently started the decisive match, but then the Serb slowed down a bit in aggression, while the Russian, on the contrary, increased the pace.

The key was the fifth game, which Djokovic lost to zero on his serve.

Moreover, more due to their mistakes than because of the active actions of the opponent.

And then Rublev made another break and took the game with a score of 6:2.

However, it was not worth it for the Russian fans to rejoice ahead of time.

In the same way, with a loss in the first set, Novak started all the meetings in Belgrade.

According to Khachanov, he seemed to study the enemy, and then come up with tactics for the end of the game.

“Djokovic seems to be able to read the opponent in the first set and then work out a plan of action.

It seems that he is able to turn on if necessary.

At the beginning of the match, he played a little defensive game, and I took advantage of this, attacked and took the first set.

And in the second, as soon as he turned on, the match went completely differently, ”Karen said after the semi-final.

Events developed in a similar scenario in the decisive match of the tournament.

Djokovic joined the game and immediately took a point to zero on Rublev's serve.

However, Andrei did not hesitate and immediately made a reverse break in a stubborn struggle.

The most intense not only in the party, but in the entire meeting were two games on the Russian serve at the end of the second set: 28 rallies and five Djokovic set points.

Rublev fought to the last.

As Andrei noted the day before, he simply had nothing to lose in the final.

As a result, the tennis player was able to bring the matter to a tie-break, but here luck remained with Novak.

And then something happened that hardly anyone could have expected: the Serb, who held the second tournament after a long pause, was tired.

He admitted this after the meeting in an interview on the court.

“I apologize for how I spent the third set.

A lot of emotions, thank you for pushing me to the final,” said Djokovic.

As a result, Rublev won the game with a score of 6:0 and became the fourth opponent in the Serb's career, who managed to take a set "dry" from him in the final of the ATP tournaments.

Before him, this achievement was established by the Frenchman Richard Gasquet, the Swiss Roger Federer and the Spaniard Rafael Nadal.

For Andrei, the title won was the 11th in his career and the third in the current season.

But in this case, it’s not the trophy that matters, but the very fact that the tennis player for the first time managed to defeat the first racket of the world.

Thus, Djokovic, in fact, supported the Russian twice in a week, in addition to words, giving him more self-confidence.

Rublev has been showing a good game since the beginning of the year, however, before that, in decisive matches with strong opponents, he often began to panic and conceded because of his own emotions.

As Andrei Olkhovsky, two-time Grand Slam champion in mixed doubles, noted, the Russian had a good chance, and he finally used it.

“For the second set, Djokovic was somewhere enough, in the third set to finish 6-0 - Andrey is great.

In my opinion, Novak is not physically ready.

In previous matches, he did not look fresh.

At the same time, according to the 18-time USSR tennis champion Anna Dmitrieva, with this victory Rublev helped not only himself, but also Daniil Medvedev.

Djokovic needs 240 points in the Belgrade and Madrid tournaments to keep his first place in the ATP rankings.

“Rublev started very badly, but during the tournament he entered a state that gives him the opportunity to show his tennis.

6-0 in the third set is uncharacteristic.

Andrei played well at the reception.

Djokovic is not yet the one we know.

Not allowing Djokovic to win some 250 points, having won, Rublev also helped Medvedev.

If Djokovic fails in the next tournament, then Daniil will again become the first racket, without even participating in the competition, ”said the specialist.

The final ended on a friendly note.

Rublev invited Djokovic to sign balls for spectators together, and during a conversation with reporters, he noted how important support was to him these days.

“Hopefully we will have more battles.

I feel good here, it's a very good city.

I want to say a big thank you to all the viewers for their support throughout the week.

It is especially important for all of us to see full stands again, ”said the tennis player.