Ali Thani: The team is able to repeat the 90 scenario.. the smartest will win, not the strongest

Sharjah club player and former national football team star, Ali Thani, said that the team players do not need advice, as they are professional players, and they realize what is required of them during the upcoming confrontation that brings together the team with its Australian counterpart, on the seventh of next June, in 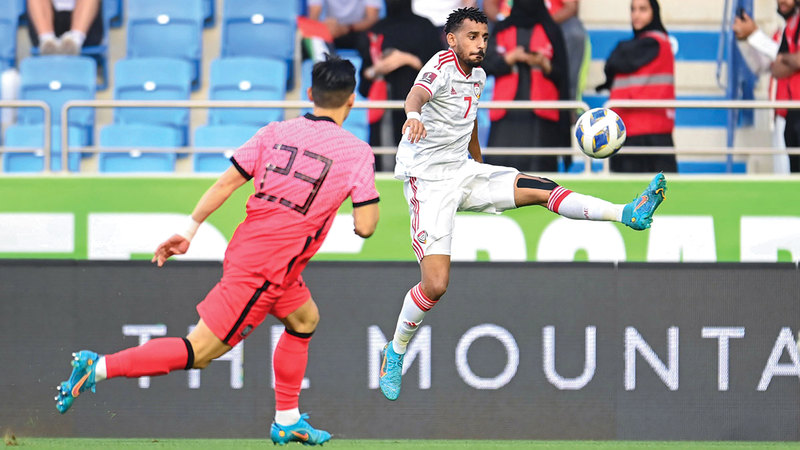 Ali Thani: The team is able to repeat the 90 scenario.. the smartest will win, not the strongest

Sharjah club player and former national football team star, Ali Thani, said that the team players do not need advice, as they are professional players, and they realize what is required of them during the upcoming confrontation that brings together the team with its Australian counterpart, on the seventh of next June, in the capital. Qatar, Doha, in the Asian play-off qualifier for the 2022 World Cup, knowing that the winner of the national team’s match with Australia will face the Peruvian team on June 13, in a play-off to win the ticket to qualify directly to the World Cup, stressing that the UAE team is able to repeat the scenario of its arrival in the Year Cup 90 In Italy, by being in the next World Cup in Qatar.

Ali Thani told "Emirates Today": "There is nothing impossible in football, although Australia is a big name in football, but it is not greater than the UAE national team, because the UAE team was found in the World Cup more than 30 years ago, that is, during the 1990 World Cup. In Italy".

The Football Association and the National Teams Committee, in coordination with the Professional League, are seeking to provide the appropriate preparation for the national team, enabling it to play and win the Australia match. Next May 27 instead of 11. The Professional League also decided, at the request of the Argentine coach, Arwarbarina, to amend the dates of the last five rounds of the professional league, so that the league ends on May 23 next.

Ali Thani added: “You should not think about what comes after the Australia match, but only think about this match, and how the team overcomes it and wins it. And he reached his goal, which is to win and collect the ticket for the next match.”

Ali Thani continued: “Football taught us that there is no big deal in this game, especially in these times, and the best proof of this is that we saw how North Macedonia excluded Italy from the 2022 World Cup, so when we look from this point of view of this match, it is a lesson.” So there is nothing impossible in football.”

Ali Thani considered that the national team needs a very smart strategy during the upcoming confrontation with Australia, considering that the best is not the strongest, but the best is the one who wins in such matches, and that football taught them that the smart one wins, and how to use methods that prevent the opponent from Using his strength, and in return using the existing capabilities of the team, preventing the opponent from taking the initiative in the match, and depriving him of using the way he plays.”

Ali Thani explained: “The Australian team will come to the match thinking that it is the guarantor of victory over the UAE team, and that the match is just a picnic for him, and that the UAE team cannot cope with this match, so the element of surprise must be used against Australia, and this must be prepared for this.” It is up to the technical and administrative bodies.

Ali Thani pointed out that in such matches, the team that wins is the unfavorable or unexpected team, asking: "Who would have expected Italy not to qualify for the 2022 World Cup?"

He said, "We followed how the team managed to beat the South Korean team in the last round of qualifying for the World Cup, and the team was able in the end to reach its goal, which is to win, and this indicates that there is no great player in football, and the matter is only related to how the match is managed, And reach the goal, and achieve what you want.”

The former international player Ali Thani stressed the importance of having determination and determination on the part of the players of the national team during the meeting with Australia, considering that this matter is the work of the administrative body of the team, while the role of the technical staff in this regard is to develop a strategic plan for how to manage the match and play it.

• «The national team should play the Australia match in the way that suits it».

• “There is no great player in football.. It is related to the management of the match.”