Slow awakening and controversial decision of the judges: how Yan lost to Sterling in the second fight in a row for the UFC title

Petr Yan was defeated in a duel for the undisputed UFC bantamweight title with Aljamain Sterling. The fight lasted all the planned five rounds and turned out to be extremely equal, and the winner was determined by the judges. As a result, two of the three sided with the American and allowed him to defend the belt. At the same time, the Russian did not agree with the verdict and said that he had been robbed, demanding immediate revenge. 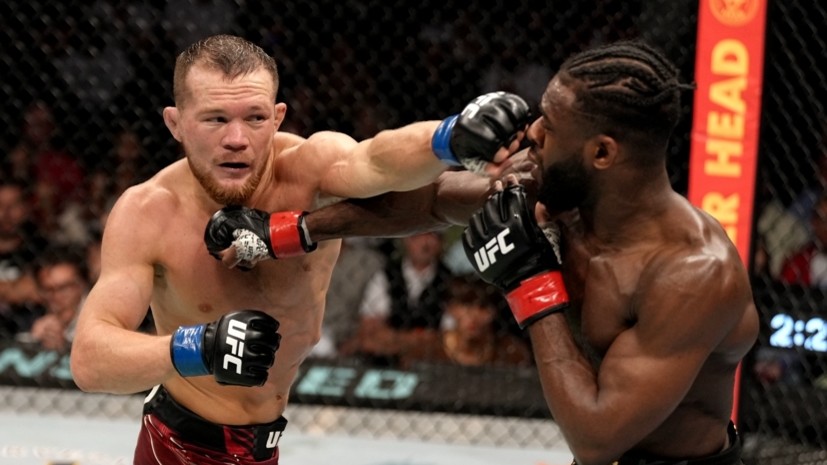 The fight between Petr Yan and Algemain Sterling could easily be called the most anticipated fight at UFC 273. This could be judged both by the reaction of the fans during the press conference and by the amount of attention paid to the confrontation.

Even though the fight for the bantamweight title had the status of the co-main event of the evening, in terms of the level of excitement, it noticeably surpassed the battle between Alexander Volkanovski and Cheng Sung Jung.

Few believed that the replacement Korean was capable of creating a sensation and taking the belt from the dominant champion from Australia.

At the same time, in the lightest division, they were clearly waiting for the return of the former king to the throne.

Bookmakers were betting on Yan, and the fans were on his side.

Surely, it was difficult for many to imagine that in the United States they would boo a compatriot and support a Russian.

By the looks of it, most fans also didn't like the behavior of the first champion in UFC history to receive the trophy by disqualification.

Over the past year, Sterling really managed to turn many against him.

It all started with him posing with a belt by the pool, insulting Jan and trying to delay the return meeting in every possible way.

And if neck surgery can be considered a good reason, then the fear of losing is unlikely.

But it was with this wording that Algemain withdrew from the fight at UFC 267 in October.

After sparring with Merab Dvalishvili, he allegedly realized that he was not in perfect shape and postponed his title defense for six months.

As a result, Peter had to rush to prepare for the fight with Corey Sandhagen, one of the most unconventional fighters in the category in terms of both style and anthropometry.

But the Russian coped and became an interim champion, cutting off the American's retreat.

As for the battle itself, one of the main intrigues was what tactics Ian would choose for revenge with Sterling.

In March 2021, he first let his opponent work as the first number and missed quite a lot in the opening round, but subsequently seized the initiative and methodically beat him during the rest.

And if it weren’t for the clouding that resulted in a forbidden knee strike, Peter would certainly have taken the upper hand - either by knockout in the fifth segment, or by unanimous decision of the judges.

However, then Algemain was just another rival, and not a sworn enemy, trying in every possible way to humiliate and insult Peter over the past 13 months.

And it was not clear whether the Russian could disengage from this and enter the octagon with a cool head.

In the first round, Jan succeeded.

Perhaps he was even too calm.

Let the Russian constantly put pressure on the American, forcing him to tirelessly circle around the cage, but he hit unusually little.

Sterling tried to keep his distance with low and middle kicks, and quite well.

Peter was never able to approach him and lost in the number of hits (13:19).

Yang was expected to continue gaining momentum in the second stint.

He really turned up the pressure, reined in Sterling with a nasty side kick to the leg, but he immediately gaped and missed the takedown.

Algemain made his way behind his back on the move, and then in a matter of seconds he went into a full mount, putting the opponent in a difficult position.

Three minutes and 50 seconds remained until the end of the round - more than enough to score an opponent from above or catch a reception.

But Sterling did not think to risk it.

Yes, he moved to the back mount and constantly threatened choke from behind, but did not try at all costs to end the fight ahead of schedule.

The American was in an ideal position and understood it.

He not only immobilized Jan and deprived him of the opportunity to counterattack, but also calmly scored points.

At the same time, there was practically no risk of being lifted by the referee due to the dominant position and the possibility of holding the grip.

Nevertheless, in the end, Algemain nevertheless decided to cement his advantage and unleashed a flurry of blows on Peter.

And although most of them fell into the block, there was a risk of a stop.

Sterling found Yang's pain point and began to press on it over and over again.

During the third round, he tried to go to the legs four times - the same number as in the first two in total.

And to the disappointment of the fans of the Russian, one of the attempts was again successful.

Peter missed with a left straight and allowed Algemain to grab one leg.

He did not manage to overturn the opponent on the move, but the competent use of the net - and the American again hung with a backpack on the back of the Russian.

As a result, another 223 seconds of control and a couple of unsuccessful attempts to fix the lock on the neck.

Before the fourth round, Jan found himself in a difficult situation.

He definitely lost the second and third, and it is possible that he gave up the first, as a result of which he could not count on winning by decision.

Peter needed to rush forward and try to knock out Algemain, but at the same time not give him the opportunity to knock himself to the ground again.

And he partially coped with this task.

In the last two rounds, Ian blocked 14 takedowns, managed to get on top himself, but could not ensure that the fight was entirely held on his “territory”.

Sterling pulled him into the ground with all his might and was even ready to give up the dominant position, just not to exchange in the standing position.

And it was logical, because in the percussion technique, Peter had a huge advantage.

He interrupted him in his arms, regularly connected his legs, and several times effectively hit his knee in a jump.

It was not possible to finish the fight ahead of schedule, as a result of which the fate of the title of undisputed champion passed into the hands of the judges.

And those had reason to take the side of both one and the other fighter.

In fact, everything depended on how the first round was evaluated, in which both acted as carefully and dimly as possible.

Piotr pressed and chased while Aljamain threw a couple of minor punches more.

As a result, opinions were divided.

One judge gave Jan the win by a narrow margin, while two sided with Sterling.

Thus, the American sensationally defended the bantamweight title and challenged TJ Dillashaw, while the Russian did not agree with the verdict and demanded a rematch.

“I think I won this fight.

I agree, I think that I won in three rounds out of five.

I want a rematch.