Mondial-2022: everything you need to know before the draw for the groups in Qatar

We know 29 of the 32 teams that will play in the final phase of the next World Cup in Qatar. Italy, reigning European champion and four-time world champion, will still be the great ab… 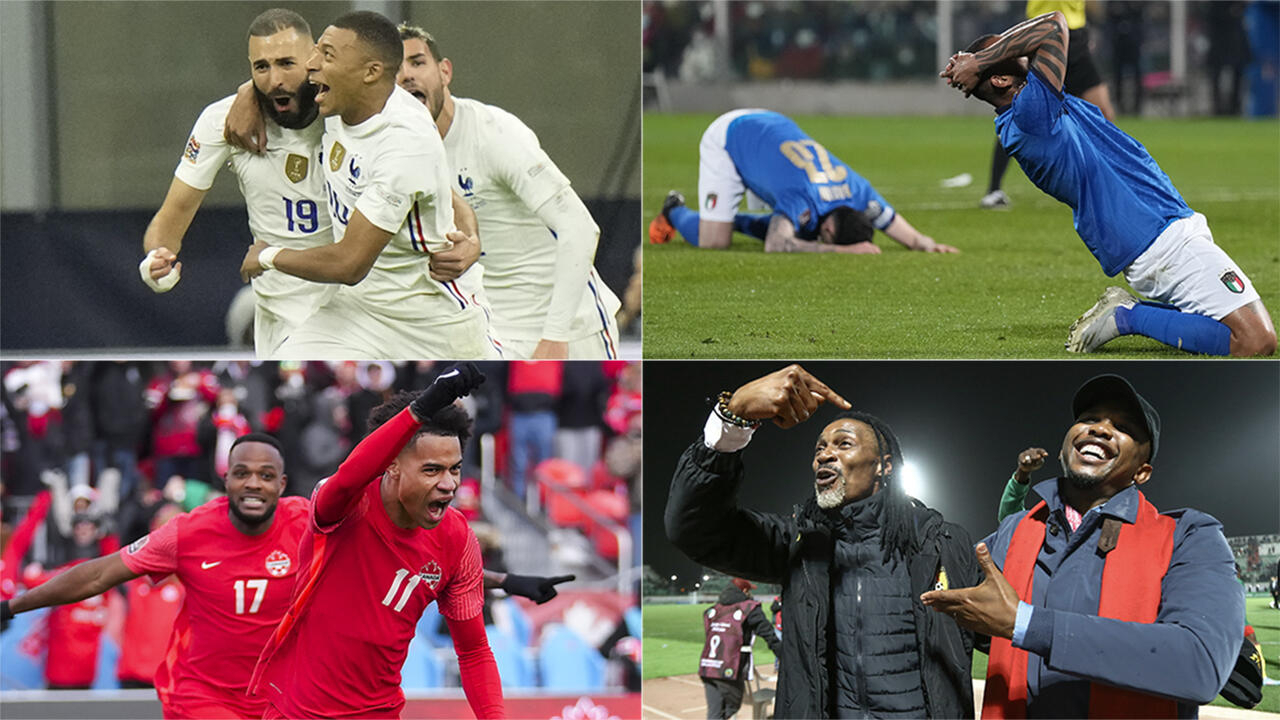 Crowned world champion in 2018 in Russia, the France team is putting its crown back on the line this year.

Not this summer, as tradition dictates, but at the twilight of 2022. So it was decided for this World Cup in Qatar, scheduled from November 21 to December 18.

This World Cup will be the second to take place in Asia, after the 2002 edition organized by South Korea and Japan.

Only one former world champion will be missing: Italy.

If the seven other former winners (England, Germany, Argentina, Brazil, Spain, France and Uruguay) did not experience any major difficulties, the sky fell on the Squadra Azzurra, quadruple world champion.

Italy once again stays at home

Italy's exit from the road is one of the main lessons of the qualifiers.

While she had her destiny in hand, the Nazionale gave up first place in group C to Switzerland on the final day.

Play-offs, the Italians hoped to play a tense final against Portugal.

But they did not even have the opportunity to challenge Cristiano Ronaldo's band, because in the semi-final of the play-offs, North Macedonia came to scalp the European champions at home in Palermo.

Italy will therefore not play the 2022 World Cup. A real earthquake on the football planet – and this is the second time in a row that this has happened.

Already in 2018, the Squadra Azzurra had fallen in the play-offs, against Sweden.

This setback deprives the Nazionale of the Mondial-2022.

Russia banned because of the war

Host country and quarter-finalist in 2018, Russia will also be absent.

They were to face Poland in the semi-final of the play-offs, and possibly Sweden in the final.

But the invasion of Ukraine by the Russian army on February 24 caused the disqualification of Russia, as well as a disruption of the schedule of the dams.

Due to the ongoing dispute, the play-off semi-final between Scotland and Ukraine has been postponed to June.

The winner will face Wales in the final.

There remains a 13th and last qualifier to be determined in the Europe zone: Scotland, Ukraine or Wales.

In June, in addition to the verdict for Europe, we will also know the outcome of the other two last dams.

One of them will pit Peru against the winner of the game between Australia and the United Arab Emirates.

Thus, New Zealand is the only representative of the oceanic confederation still in the running.

In the play-offs, the "All Whites" will face Costa Rica, with the hope of qualifying for the third World Cup final phase in their history, after 1982 and 2010.

The qualifiers for Africa (CAF):

The qualifiers for Asia (AFC):

The qualifiers for South America (Conmebol):

Qualifiers for North America, Central America and the Caribbean (Concacaf):

How to use the draw

The qualified teams are initially divided into four hats.

They are drawn one after the other, from hat 1 to hat 4. They find themselves in eight groups (from A to H) each made up of four teams.

Each group will consist of one team from each hat.

The 32 teams are divided into the four hats according to their rank in the FIFA world rankings, except for Qatar, which is automatically placed in hat 1 (that of the highest ranked nations) thanks to its status as host country.

The last play-offs will go into hat 4, regardless of their ranking.

During the draw, two teams from the UEFA zone may end up in the same group.

On the other hand, two teams from the same other zone (CAF, AFC, Conmebol, Concacaf) cannot face each other in the first round.