Dialogue | Olympic champion Li Xiaoxia said that she changed into the protective clothing she had been wearing for a day...

In the past few days, a "big white" at a nucleic acid testing site in Shenyang has attracted the attention of netizens.   The volunteer with the three characters "Li Xiaoxia" written on the protective suit maintained order on the front line of the fight against the epidemic and helped residents scan the code to register. Taking off the protective clothing, "Dabai" has another identity - the Oly 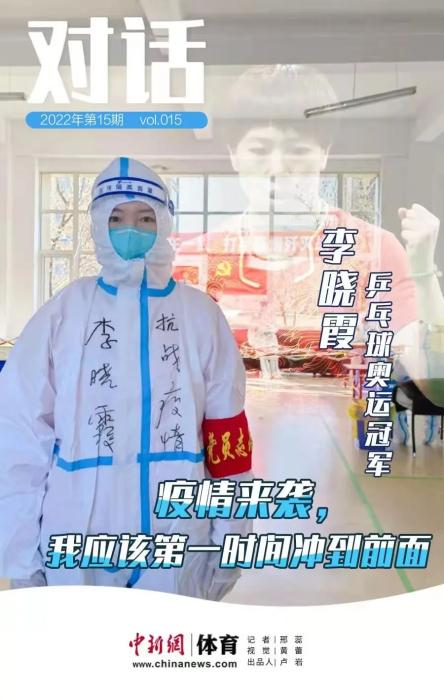 In the past few days, a "big white" at a nucleic acid testing site in Shenyang has attracted the attention of netizens.

The volunteer with the three characters "Li Xiaoxia" written on the protective suit maintained order on the front line of the fight against the epidemic and helped residents scan the code to register.

Taking off the protective clothing,

"Dabai" has another identity - the Olympic champion of table tennis.

She is Li Xiaoxia "Benxia" who has won the Olympic Games, World Table Tennis Championships, World Cup and other championships.

Since retiring in 2017, Li Xiaoxia has rarely appeared in the public eye, and she has focused her life on her family.

After another day of volunteer work on the 29th, Li Xiaoxia started a dialogue with China-Singapore Sports.

She sincerely said that

it is precisely because of the help of many people that she can achieve results. Now is the time to give back to the society and the country.

In the face of the epidemic, you should rush to the front as soon as possible.

Li Xiaoxia, who has returned to her family, has more "fireworks" in her life.

She still misses her career as an athlete from time to time, pays attention to the growth and progress of national table tennis, and also laughs at herself because "the eldest daughter has an Olympic champion mother, but doesn't like table tennis".

The full interview is as follows:

China-Singapore Sports: When you volunteered, did any residents recognize this as the Olympic champion?

Li Xiaoxia: Basically, you can't recognize it when you put on protective clothing, because only two eyes are exposed.

When I went there for the first time, I didn't want to write my name on the protective clothing, but the community management committee required it to be written.

After I wrote it, everyone didn't pay much attention to it. I just said that this "big white" is called Li Xiaoxia. I didn't expect it to be a football player.

China-Singapore Sports: As an epidemic prevention volunteer, what are your main responsibilities?

Li Xiaoxia: Mainly to maintain order at the scene, and then to look at the green code.

When I went there for the first time, the community said, "I'll give you an important task, you can scan everyone's code".

But I'm afraid that I can't scan it well, because the code of the child is the same as that of the adult, I'm afraid of making a mistake and affecting everyone.

China-Singapore Sports: Why do you want to join the ranks of anti-epidemic volunteers?

I need to set an example for the children. I hope they will bravely move forward when facing difficulties in the future.

When I was in the national team, I had a lot of unknown sparring partners around me.

It is because of their help that I am where I am today.

In the face of the epidemic, I should rush to the front as soon as possible and do my best to help those in need within my ability.

Li Xiaoxia: You need to wear it all the time.

One volunteer, because it was troublesome to put on and take off the protective suit repeatedly, did not go to the toilet from 7:00 a.m. to 11:30 in the morning.

Medical staff who do nucleic acid testing also wrap tape around their arms to prevent viruses and bacteria from getting in.

The protective clothing is airtight, especially hot in hot days, and very cold when it is windy in cold days.

China-Singapore Sports: Do you have any different feelings after completing the volunteer work?

Li Xiaoxia: I think the quality of the citizens is very high. Everyone is standing calmly outside the one-meter line, and no one is fighting for it.

Many elderly people don’t know how to scan codes. When volunteers are asked for help, they will let the people behind them pass first.

Everyone wants to work together to overcome the epidemic.

The Olympic champion who was "disgusted"

China-Singapore Sports: Now the two children are still young, if you volunteer, will they be clamoring for their mother?

In my eldest's impression, "Da Bai" is a particularly powerful cartoon character, omnipotent and able to help her overcome all difficulties.

Today (29th) the child knew that I didn't eat, and brought me an egg and a duck egg.

I told the eldest, now that my mother is going to help those in need, when you grow up, you will also have to give up your ego and complete your big ego.

Then she asked me, "Mom, can I volunteer?"

Parents are a mirror of their children. I am not very expressive, but I want to use practical actions to motivate and infect children.

China-Singapore Sports: You and your lover used to be table tennis players, do you have any experience with children?

Li Xiaoxia: This question gives me a headache.

I can't mention table tennis to my eldest, she doesn't like it too much.

As soon as she went to the arena, she said, Mom, let's go.

She still doesn't know that I can play, and I don't want to put too much pressure on her. I said that all the medals and trophies in the family are my father's.

Sometimes when she sees the video of my game, she asks to change the channel.

I don't force her to play table tennis, but I will definitely let her choose two sports that she likes.

I want her to know that sports can bring positive energy to people.

The other is to let her learn to accept losing and winning from an early age, which is also a process of inner strength.

China-Singapore Sports: When coaxing a child, if the child is disobedient, will he get angry?

Li Xiaoxia: I often yell at her.

In fact, I also know that educating children to speak reason in a very peaceful tone, but sometimes I really can't be peaceful.

For children's education, I have been in the process of learning.

I grew up on sports teams and played table tennis all my childhood.

Now I go to play with my children, like painting, catching sand,

I think it's quite interesting, and it can make up for my childhood.

Zhongxin Sports: In the eyes of many people, your career is perfect, and you have won all the honors you deserve.

Do you have any regrets in your table tennis career?

Li Xiaoxia: Actually, there are many regrets.

Looking at it now,

I think I should have played for two more years and let everyone take another look at my style of play.

Grades are not important anymore, I just want to show myself to everyone.

After retiring and having a family, I still miss the moments on the court.

It feels good to have dreams and pursuits, and to concentrate on doing one thing.

China-Singapore Sports: How do you deal with the pressure when you play?

Li Xiaoxia: I used to cry, talk, and write when I was on the sports team.

Now I find it interesting to look at the diary I wrote when I was an athlete.

There was a time when I just couldn't watch myself lose, but the process of overcoming myself was painful.

Some fans always say that my leggings are longer than shorts when I play. I wear them like this to protect my muscles, and

secondly, because my thighs and waist are blue, and I pinched them myself.

At that time, I hated that iron could not become steel, and thought why I was so incompetent and why I always lost.

In this state, no one can help you, you can only adjust yourself.

Li Xiaoxia: I have concerns, but now I can't watch the game as down-to-earth as before, children are always making trouble.

China-Singapore Sports: As Chen Meng's senior sister, do you usually communicate with her a lot?

Before the competition, will you give her some advice?

Li Xiaoxia: She communicates a lot, and she is also an outgoing person.

Athletes have good personalities and can make jokes.

After the Olympics, I think Chen Meng has matured a lot in both mentality and technology.

I usually don't take the initiative to go to her, because athletes have a very complete preparation system before the competition.

But if she asks me, I will definitely reply to her as soon as possible.

In fact, not only Chen Meng, but also Sun Yingsha and Wang Manyu come to ask me, I will share with them without reservation.