Drama: Algeria and Egypt failed to qualify for the World Cup.. A new failure for Mahrez and Salah, and the beginning of changes and a wave of dismissals

The final round of the 2022 FIFA World Cup qualifiers in Africa witnessed some drama and surprises on Tuesday, although the continent's representation in the upcoming finals in Qatar will not differ much from the previous sessions. 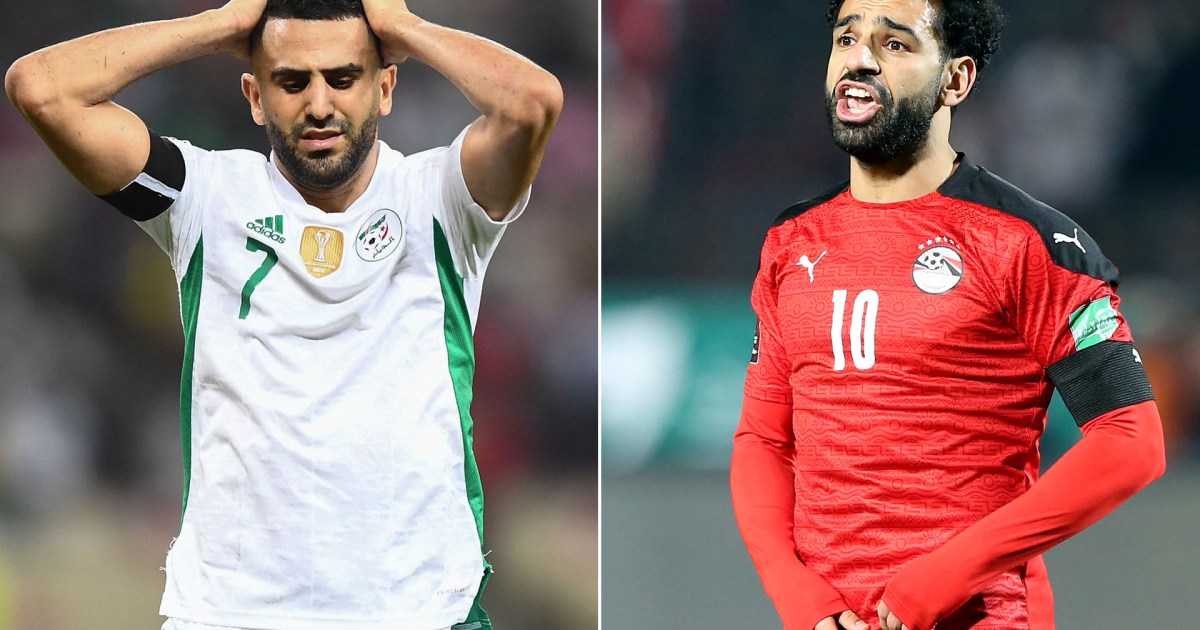 The final round of the 2022 FIFA World Cup qualifiers in Africa witnessed some drama and surprises on Tuesday, although the continent's representation in the upcoming finals in Qatar will not differ much from the previous sessions.

Morocco, Senegal and Tunisia participated in the last finals in Russia 2018, while Ghana and Cameroon competed in the previous finals in Brazil 4 years earlier.

Cameroon and Ghana produced unexpected performances away from home to ensure that they appeared in the finals after outperforming and eliminating two prominent teams, Algeria and Nigeria.

A devastating blow to Algeria

Cameroon secured their place in the finals with their last shot in the match in extra time in Blida when Karl Toko Ekambi scored a surprise goal, putting the 2019 African champions in an unenviable position.

This is the decisive blow for the Algerian national team, which is already afflicted by an early exit from the first round of the last African Nations Cup in Cameroon, which means that it will witness drastic changes and a wave of dismissals in the coming days.

Here, the important question arises about the secret of the failure of the green stars who shine in Europe, headed by Riyad Mahrez, to make the difference with Algeria, despite their appearance in a different way with their teams.

"We were 10 seconds away from qualifying for the World Cup. Our team collapsed," Algeria coach Djamel Belmadi said after the 2-1 home defeat.

Belmadi added, "We focused all of our focus and attention on this match for this goal. Reaching the finals was within our reach. It will be difficult for us to overcome the effects of this in the coming days."

Ghana took advantage of a goalkeeper's mistake to advance to the finals with an away goal difference.

Their 1-1 draw in Nigeria caused riots from the local crowd.

In contrast to Algeria, Ghana bypassed this qualification for the World Cup the painful effects of an early exit from the last African nations as well.

"We had a little luck during a very difficult match and fought our way through. But our line of defense was great," said former international player Otto Addo, the new Ghana coach who took over the job just a month ago.

It is expected that Nigeria's failure to reach the finals will cause major changes in the leadership of the popular game in the country.

The Nigerian team dominated the game but did not manage to handle the final touch and looked exhausted towards the end.

Senegal repeats the defeat of Egypt

In front of a large crowd in the new Dakar stadium, Senegal beat Egypt 1-0, and the two teams tied 1-1 on the aggregate score after extra time.

Then, for the second time in a row, penalty kicks were resorted to to settle the confrontation, 6 weeks after Mane won the victory for his team in the final match of the African Nations Cup in Cameroon.

Once again, Mane scored the winning goal when he scored to give his team a 3-1 victory, while Salah missed Egypt's first kick.

Unlike Mane, Salah was far from his impressive level with Liverpool and failed to make the difference, surrendering to Senegalese control, and even made matters worse, wasting the first penalty kick that frustrated the Egyptian team and was the first sign of defeat.

Of course, the second defeat will be after her in Egypt, where everyone is waiting for the dismissal of Portuguese coach Carlos Queiroz at the earliest opportunity, with major changes in the team, which disappointed the Egyptians twice this year.

Tunisia deprived Mali of the first appearance in the World Cup finals by winning them 1-0 in the total score for the home and away, while the Moroccan team won a big 4-1 victory over the Democratic Republic of the Congo in Casablanca after a 1-1 draw in the first leg.