Safia Al Sayegh presented the UAE with the first historical Asian women’s cycling medal by winning the individual time trial in the U-23 category at the Asian Cycling Championship currently being held in Dushanbe, the capital of Tajikistan, which is concluding 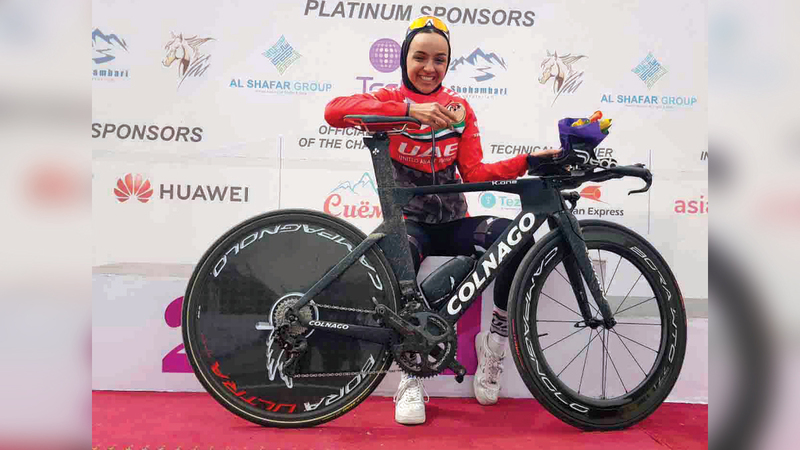 Won the bronze in the singles against the clock

Safia Al-Sayegh presented the UAE with the first historical medal in Asian women’s cycling by winning the bronze medal in the individual race against the clock in the under-23 category in the competitions of the Asian Cycling Championship currently held in Dushanbe, capital of Tajikistan, and which concludes its competitions the day after tomorrow, with the participation of 450 riders and contestants from 25 countries.

Al-Sayegh (20 years) took third place in the race that was held yesterday morning, achieving a time of 37:02.743 minutes, while Uzbek Yanina Koskova won first place in 34:08.064 minutes, and Kazakh Buta Batyrbikova came in second in 36:40.339 minutes.

Safia Al Sayegh expressed her pride in being the first Emirati athlete to succeed in climbing to the Asian podium after achieving many local and Arab trophies. I want to develop my level further and dedicate more achievements to her.”

Safiya Al-Sayegh considered her third place in the Asian Championship, the most important culmination in her sports career, which began six years ago, and a real start for her professional career and an additional incentive to win more titles at the continental level. The bronze medal also gave her a sense of her ability to compete in Asia.

She added, "I feel that my level is developing little by little, but in the right way. The Asian Championship was an important station in my career, so I set getting a medal in it as one of my main goals this season, after I achieved the Arab Championship title and the UAE title, and despite the strong competition in the race, I had great confidence." To grab a place among the top three.

I would like to thank our national team coach Badr Thani and coach Sana Al Mirdasi for the encouragement and follow-up and my Emirates team, and I hope to be an inspiring model for the rest of the girls to practice cycling, which has begun to flourish in the Emirates.

The UAE and Arab champion confirmed that her third place win will enable her to earn more points in the international classification, which will enhance her qualification for the World Championships to be held in Australia next September.

Mirza is in fourth place

Yusuf Mirza, captain of the national cycling team, finished the individual race against the clock in fourth place with a time of 30:14.998 minutes, while the Kazakhstan team's cyclist Yevgeny Fedorov led the race in 28:45.197 minutes, and Japan's Narioki Masuda came in second with a time of 29:36.745 minutes, and the Uzbek Muradjan Khalmuratov in 29:58.291 minutes.