18 international and competitive events in Dubai this weekend

At a time when the world's attention will turn to Dubai, next Saturday evening, to follow the most famous international horse race, the "Dubai World Cup Horse Race", whose 26th edition is being held in "Meydan", in which the world's strongest horses compete for prizes totaling $ 30.5 million (112.03). million dirhams 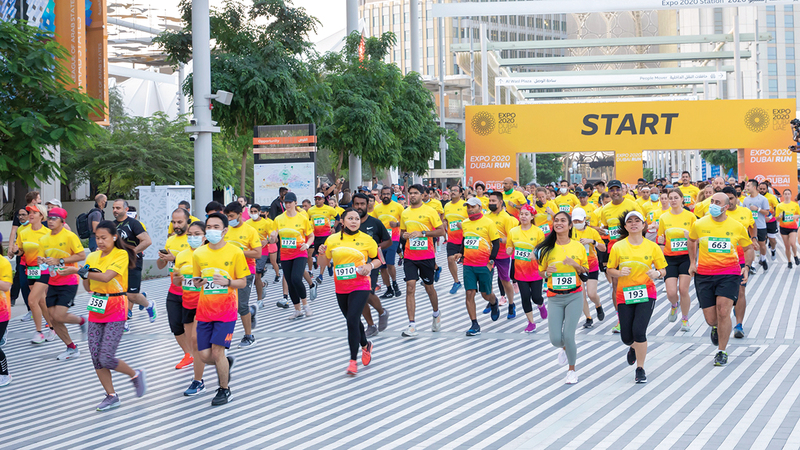 Most notably the Dubai World Cup for horses.. and the Expo Running Race

18 international and competitive events in Dubai this weekend

At a time when the world's attention will turn to Dubai, next Saturday evening, to follow the most famous international horse race, the "Dubai World Cup Horse Race", whose 26th edition is being held in "Meydan", in which the world's strongest horses compete for prizes totaling $ 30.5 million (112.03). Million dirhams), Dubai’s stadiums, tracks, streets and halls are witnessing many other 18 sporting events, led by the Expo 2020 Dubai Run, which will be held next Saturday morning, inside the corridors of the Expo.

The Expo 2020 Dubai race has so far attracted more than 15,000 participants over distances of 3, 5 and 10 km, with registration continuing in the 10 km category until midnight. The Expo Run is one of the most important community events organized during the Expo period, in addition to the weekly races that It takes place every Saturday morning.

The 13th edition of the Fazza International Athletics Championship, held under the patronage of His Highness Sheikh Mansour bin Mohammed bin Rashid Al Maktoum, Chairman of the Dubai Sports Council at the Dubai Club for People of Determination, will conclude with the participation of 500 male and female athletes from 43 countries who compete to qualify for the Games. Paralympics Paris 2024.

The ground tennis competitions will also conclude at the Dubai Duty Free Tennis Stadium, as part of the activities of the second edition of the "Dubai School Games", the largest sports tournament of its kind for private schools in Dubai, organized by the "ESM" company.

The activities of the seventh edition of the Emirates Motor Show (Custom Show) will be held at the Dubai World Trade Center from 25 to 27 March. The exhibition includes competitions for participants and the public, with prizes worth 500,000 dirhams. It also includes special activities for children and families, and drift competitions in the center’s outer court. Dubai World Trade.

3 Boxing ChampionshipsDubai is witnessing the organization of three boxing tournaments, with the participation of boxers from different countries of the world. The second edition of the EMD Fight Night Boxing Championship will be held on Friday, March 25, at the EMD Fitness Club in Ras Al Khor in the Nad Al Hamar region, where a group of Boxing champions from inside and outside the country.

The Legacy International Boxing Championship, which will be held at the Dubai Duty Free Tennis Stadium on Saturday, March 26, will witness nine of the strongest boxing fights, with the participation of 14 international boxers, as Cuban boxer Mike Perez defends the "WPA Continental" title against Czech Vasyl Dokar.

The “Rising Sun” International Heavyweight Boxing Championship will also be held on Saturday, March 26 at the Al Habtoor Grand Hotel and Resort, and it will witness a strong competition between the Cameroonian boxer, Rolly Lambert, against the French boxer, Maurice Bossetti.

Six running races will be held in various regions of Dubai, including the Skechers Run at the Dubai Police Academy in the Al Sufouh area, the Expo 2020 Run 3 race, the Indian Community Run next Sunday on Al Mamzar Beach Road, and the Arthritis Walk that starts from Gate 2 in Dubai Creek Park, Q1 Running Race at Meydan Racecourse, and the Spinneys Family Run, which will be held in the Cedar Villa areas of Silicon Oasis and Nad Al Sheba.