The success of Krasnodar without legionnaires, ricochet goals from Zenit, three victories in stoppage time: what did the 20th round of the RPL remember

Zenit beat Ufa thanks to successful rebounds after long-range shots by Danila Krugovoy and Malcolm. Krasnodar with nine Russians in the starting lineup turned out to be stronger than Ural. Lokomotiv defeated Khimki in the match with five goals, but risks losing points due to Jan Kukhta's unserved suspension. And CSKA, Sochi and Rubin pulled out victories in stoppage time by the referee. What I remember about the 20th round of the RPL - in the material RT. 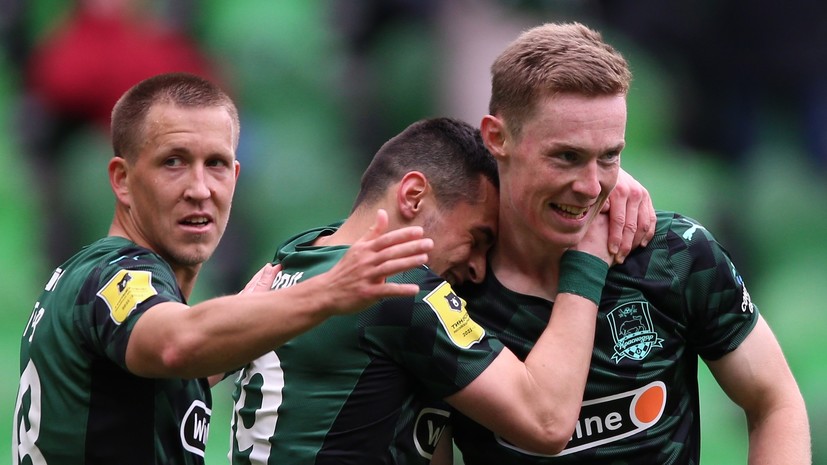 Last week turned out to be extremely difficult for Lokomotiv.

And then the club sensationally lost to Yenisei with a devastating score and flew out of the Russian Cup.

On top of all the troubles, acting mentor Dmitry Loskov fell ill.

After such a fiasco, the railway workers were obliged to beat the outsider Khimki in the RPL.

In the end, they managed to score three points, but they were given to the Muscovites with difficulty.

It is gratifying that the newcomers brought an important victory.

Girano Kerk, who joined the team last year, equalized in the eighth minute.

And Wilson Isidore and Jan Kukhta, who arrived already in the winter, scored their debut goals.

The Cech was one of the most active players on the field at all and struck four blows on someone else's goal.

It should be noted, and two assists Dmitry Barinov.

The Russian twice sent partners into the breakthrough, taking advantage of the opponent's problems when creating an artificial offside position.

In the composition of Khimki, the rookie also became the best - Didier Lamkel Ze, who scored a double.

But the Brazilian Bruno Viana only let his partners down, receiving a second yellow card at the end of the first half.

For the second match in a row, Sergei Yuran's wards finished in the minority, but almost scored points.

However, they still have a chance to do it in the offices of the RPL.

The fact is that the author of the winning goal, Kukhta, received a red card in his last game in the Czech championship, but did not leave the suspension.

The team near Moscow has already filed a protest with the RFU FTC.

The first match after the resumption of the season in the RPL was also played by Wings of the Soviets.

Despite this, in the home meeting with Arsenal, the Samarans had a serious advantage and inflicted three times more blows than the opponent (21 vs. 7).

However, the gross individual mistakes of Fernando Costanza prevented them from winning.

The newcomer was forced to leave in the support zone and brought two goals at once.

At the beginning of the confrontation, he allowed himself to be robbed by Kingz Kangwe and delivered an accurate long-range shot, and already in the second half he played with his hand in his own penalty area.

The penalty was sold by Djordje Despotovic, who moved to Tula from Rubin in the winter.

The individual skill of their forwards helped the hosts to snatch a draw.

Vladislav Sarveli scored the seventh goal in the current draw of the national championship, and Ivan Ignatiev scored the first.

In the 71st minute, he made his debut for the Wings, and soon closed the cross from the right flank.

For the young pupil of Krasnodar, this goal was special - the first from the game in the RPL since November 2019.

After that, he distinguished himself three times in the composition of Rubin, but only from the penalty mark.

Recently, in domestic football, the topic of the possible departure of legionnaires from the RPL has been one of the most discussed.

However, only Krasnodar has seriously affected this process so far.

The club suspended the contracts of seven foreigners at once, terminated the agreement with Viktor Klasson and is in talks to leave captain Grzegorz Krychowiak.

Plus, the new head coach Daniel Farke left the country.

In this regard, it was curious how the southerners would look in the match with the Urals - in a sharply weakened squad, under the leadership of Alexander Storozhuk, the acting coach.

As a result, nine Russians, as well as one Belarusian and one Armenian, got into the roster.

Surely Sergei Galitsky was pleased with the presence of a large number of pupils.

So, Irakli Manelov appeared on the field from the first minutes and gave an assist to Vladimir Ilyin.

And Omar Popov and Dmitry Kuchugura made their debut for the main team.

The latter, at the age of 17 years, 4 months and 14 days, entered the top three youngest players in the current RPL season.

The cardinal update did not prevent Krasnodar from taking over.

But the fate of the confrontation was decided by a rather controversial, according to Yekaterinburgers, penalty.

At the beginning of the second half, Ivan Kuzmichev, at the entrance to the penalty area, touched Yevgeny Chernov's ankle, trying to knock the ball out, and Yevgeny Turbin, after watching the replay for a long time, pointed to the “point”.

The penalty kick was scored by Eduard Spertsyan.

Kuzmichev became an involuntary anti-hero even six minutes later, when, in the hope of covering Ilyin's blow, he only disorientated Ilya Pomazun.

Shortly before the final whistle, Eric Bikfalvi reduced the gap to a minimum with a beautiful long-range shot, but the guests did not have time to save themselves.

In the central match of the tour, Dynamo lost to Spartak in the Moscow derby and gave Zenit the opportunity to break away in the title race.

In turn, the Petersburgers at home simply had no right not to beat the outsider Ufa.

However, they still tickled the nerves of the fans.

In the first half, the account was never opened.

Alexander Belenov saved the guests a couple of times, but on the whole they defended themselves reliably.

After the break, the favorite was helped to snatch victory by two incredible strikes from long range.

First, Danil Krugovoi, on the rebound after a corner from outside the penalty area, sent the ball into the far corner along a trajectory inaccessible to Belenov.

For the defender, this goal is his debut in the first team of Zenit.

It is noteworthy that he wrote it down at his own expense in the confrontation with the former team, whose colors he defended for several years.

He also decided to shoot from 25 meters, but the Brazilian was helped by a serious rebound from the opponent's leg.

But the Bashkortostanis were not lucky.

Egash Kasintura from a lethal position hit the crossbar, and Alexei Nikitin's point-blank shot was parried by Mikhail Kerzhakov.

So the wards of Sergei Semak won and ten rounds before the end of the championship increased the gap from Dynamo to five points.

Incredible performance by Lisakovich for the new team

Immediately in three matches of the 20th round, the decisive goals were scored in the time added by the referee to the second half.

At the last moment, Rubina also managed to snatch victory in the away match with Akhmat.

And for Grozny residents the meeting began more than successfully.

Already in the third minute, Daniil Utkin converted another standard.

The midfielder, rented from Krasnodar, scored the fourth goal with a direct free kick - more than anyone else in the top 15 European championships of the current season.

However, after the break, there was a man in the Kazan team who almost single-handedly turned the tide of the unsuccessful confrontation - Vitaly Lisakovich.

The Belarusian newcomer scored twice in the first two games for the new team - with Zenit in the RPL and with Rotor in the Russian Cup.

This time the striker limited himself to one goal, at the beginning of the second half of the meeting he closed the cross of Khvichi Kvaratskhelia from the flank.

The denouement came in the 91st minute.

The hosts unsuccessfully entered the ball out of bounds and immediately received a quick counterattack in response.

Lisakovich sent Anders Dreyer to a rendezvous with the goalkeeper with a chic touch-down pass.

Perhaps Giorgi Shelia could have saved his partners, but at the crucial moment he slipped and fell on the lawn.

The Dane had to carefully transfer the Georgian.

Rubin won the second strong-willed victory in a row in a few days with a score of 2:1.

The cup match with Rotor developed according to a similar scenario.

And Lisakovich continues to delight the fans.

In the first three matches for the two-time national champions, he scored five times and gave one assist.

Moreover, in the Premier League, he has so far demonstrated a unique implementation: three shots on goal and three goals.