The return of Nurmagomedov's brother, the campaign for the title of Ankalaev and the test of Volkov: the most anticipated events of March in MMA

Magomed Ankalaev will fight Thiago Santos, and if he wins, he can get the title of the first contender for the UFC light heavyweight title. Alexander Volkov will face the rising star of the heavyweight division Tom Aspinall, and Umar Nurmagomedov will fight his second fight in the Ultimate Fighting Championship. In turn, Shamil Abdurahimov will face off against compatriot Sergei Pavlovich, and ACA will hold four title fights. 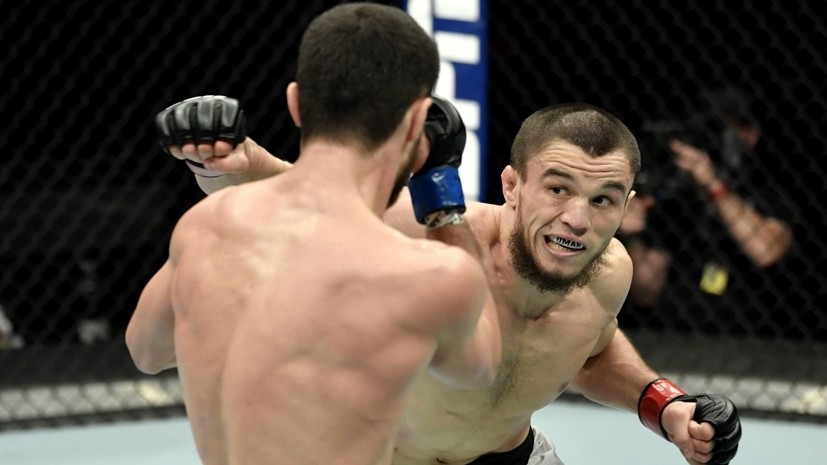 The Ultimate Fighting Championship rarely arranges numbered tournaments without a title fight, but this time the matchmakers decided to make an exception.

After all, there is no doubt that the excitement around UFC 272 will go through the roof.

The main event will see former welterweight title contenders who have been in extremely tense relations over the past years.

According to Masvidal, the conflict with the former American Top Team partner began with the fact that Covington did not pay his coach for the work, and also spoke harshly about another teammate, Tyrone Woodley.

Over the course of his career, Covington crossed the path of several other fighters, in particular, Dustin Poirier.

However, he stated that he would never fight him for money, and after the fight, they would both go to prison.

And there is every reason to believe that the battle with Masvidal will be no less uncompromising.

Largely because its winner will become one of the contenders for the belt.

Also at the show in Las Vegas, the performance of two representatives of the Eagles MMA is announced.

Tagir Ulanbekov will take on seasoned Tim Elliott, who could help him break into the top 10 flyweight division.

However, the most anticipated is the return to the cage of Umar Nurmagomedov.

In January 2021, Khabib's cousin made an impressive UFC debut but subsequently missed over a year with a knee injury.

The second fight was scheduled for March, and initially the opponent was called Jack Shore.

However, the battle with the undefeated Welshman was canceled for unknown reasons, and instead the Russian went to Brian Kelleher.

During his career, the American won only two-thirds of the fights, but he always put on a spectacular show in the cage.

Therefore, you can be sure that their duel will not become boring.

A day later, a large-scale show will be held in Russia.

It promises to be remembered for two battles for the trophy and a duel with the participation of Ivan Shtyrkov.

The Ural Hulk intends to take the last step towards the fight for the belt, and Leonardo Silva will try to prevent him.

In 2018, the Brazilian had an unsuccessful performance at Dana White's Contender Series and was unable to get a contract with the UFC, but subsequently won six of eight bouts.

He lost only to Mikhail Ragozin and the current ACA champion in the category up to 93 kilograms - Muslim Magomedov.

He, in turn, will hold the first defense of the title in a duel with Grigor Matevosyan.

Initially, they were supposed to face off back in November, but the battle was postponed twice due to health problems with the Russian.

The main fight of the evening was also on the verge of collapse.

Less than a month before the tournament, Alikhan Vakhaev fell ill with the coronavirus and withdrew from the fight for the heavyweight title.

However, Tony Johnson was quickly replaced by Salimgerey Rasulov.

The Russian goes on a series of six victories in a row, and in the event of another success, he will become the second fighter in history to win the ACB and ACA heavyweight belt.

Before him, such an achievement was submitted to Muhumat Vakhaev.

Less than a week later, a duel will take place, following which another Russian may get the opportunity to fight for the UFC belt.

Magomed Ankalaev has the longest winning streak among the top fighters in the light heavyweight division, and to get the status of a contender, it’s enough to effectively deal with Thiago Santos.

After losing to Jon Jones, the Brazilian noticeably lost and lost twice more, and only managed to get the better of the unstable Johnny Walker.

If Ankalaev is one step away from the title, then Azamat Murzakanov is trying to make his debut in the largest MMA promotion in the world.

The matchmakers have already tried three times to organize a fight for him, but all three times he fell through the fault of his opponents.

Tafon Nchukvi, a strong Cameroonian who lost only one of seven fights in his career, will try not to repeat the fate of his predecessors.

Unlike Ankalaev, Alexander Volkov will defend his place in the elite.

In just a year and a half, Tom Aspinall has become one of the most promising heavyweights in the championship, winning four bouts in a row ahead of schedule.

If he manages to repeat this in a duel with a Russian, he will not only break into the top five, but will also become a full-fledged participant in the championship race.

As for Drago, he is hardly satisfied with the role of the gatekeeper, but it is in it that he strengthens himself after the defeat by Cyril Gan.

Perhaps a victory over the Englishman can change the situation and allow him to fight with the current tops again.

Instead of Umar Nurmagomedov, Timur Valiev will fight the aforementioned Shor, and Nikita Krylov will interrupt a year-long downtime in the battle with Paul Craig.

The confrontation is of great interest, because in it a strong wrestler will measure his strength with a skilled grappler.

And the Russian will have to try to prevent the Scot from winning for the 14th time by painful or suffocating.

The greatest excitement is caused by a purely Russian duel involving heavyweights.

Domestic fighters rarely meet each other under the auspices of the championship, so each such fight becomes a significant event.

Among other things, the long-awaited return to the cage of Sergei Pavlovich looks intriguing.

He last fought in October 2019, after which he was withdrawn from fights three times - twice due to visa problems, once due to injury.

The four Russians will also perform at the next UFC weekly, which will be led by the battle of two top heavyweights.

The most interesting is the fight between the fighters of the lightest division.

In the last fight, Kai-Kara France knocked out Cody Garbrandt in a spectacular manner, which allowed him to increase his army of personal fans.

So much the better for the domestic fighter, who lacks one significant victory to the status of the first contender.

At the moment, he is second in the rankings and will certainly be eligible to compete for the belt if Deiveson Figueredo and Brandon Moreno do not continue to pass the trophy to each other.

In turn, Aleksey Oleinik will try to take over in the 60th fight of his career and prove that even at 44 he is able to compete at the highest level.

The opponent will be the once promising Ilir Latifi.

In grappling, the Swede is unlikely to be able to oppose anything, but it will not be so easy to bring him to the ground.

Askarov and Oleinik will be joined by two Russians who got into the UFC through the DWCS show.

But if Vyacheslav Borshchev, who received a contract in October 2021, has already managed to fight in the largest promotion and even receive a cash bonus for the “Performance of the Evening”, then Alishab Khizriev has not been able to make his debut for more than a year.

It remains to be hoped that neither injury nor coronavirus will interfere with his duel with Abusupyan Magomedov representing Germany.

As for the compatriot, he will have a battle with Mark Diakisi.

The Englishman is quite dangerous in the standing position, but he has serious problems on the ground.

Not without reason, two of the five defeats he suffered surrender.

The show will headline the battle for the ACA welterweight belt.

Abubakar Vagaev will try to make the first defense of the title, which he won more than a year ago - in February 2021.

Then he took revenge on Murad Abdulaev, but after that he never fought.

Previously, the promotion twice tried to arrange a meeting with Ustarmagomed Gadzhidaudov for him, but it failed twice.

Among other things, two more Russians will put the trophy on the line.

Magomedrasul Khasbulaev will fight Alikhan Suleymanov, who has not suffered a single defeat in five years, and the second one will fight Oleg Borisov, who unexpectedly broke into the summit.

As of July 2020, he had only one victory in his last four fights, but subsequently he won three times in a row.

True, creating another sensation will not be easy.

After returning from the UFC, Magomed Bibulatov did not lose a single battle.