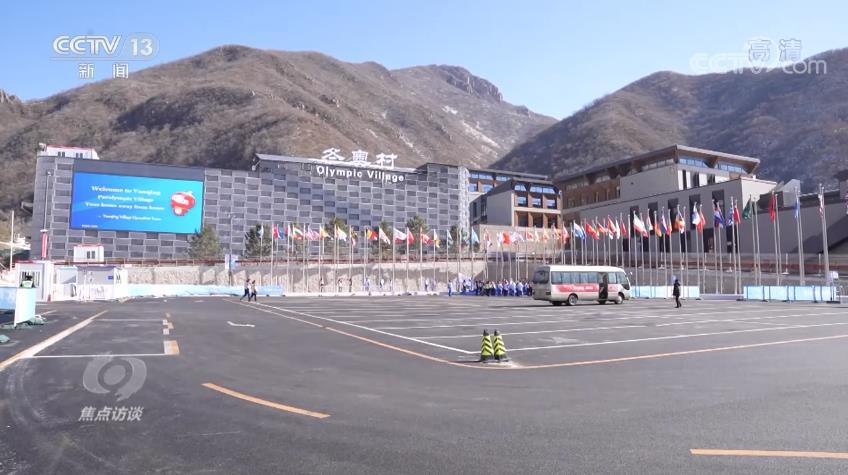 (Focus Interview): The enthusiasm for the Winter Olympics is still there, and the curtain of the Beijing Winter Paralympics is about to kick off on March 4.

Adhering to the principle of saving competitions, all the venues used in the Winter Paralympic Games are the same as those of the Winter Olympics, with one venue for dual purposes.

However, the Winter Paralympics has its particularities. From the competition venues to the athletes' restaurants, the requirements are different from those of the Winter Olympics, and the facilities and services need to be converted.

The ten-day period after the closing of the Winter Olympics is a critical period for the transformation of work.

How to facilitate Winter Paralympic athletes from all over the world, so that they can have a wonderful barrier-free experience?

Different from the Winter Olympics, in order to make it more convenient for disabled athletes, the security checkpoint has been moved directly to the village gate from 12 kilometers away.

Not only the location has changed, but the security check has also changed a lot.

Considering that some athletes with physical disabilities need to wear prosthetics or ride wheelchairs, they may be misjudged when passing through the security check machine, and a green channel for manual security check has been specially added.

Cheng Hong, mayor of Yanqing Winter Olympic Village (Winter Paralympic Village), said: "Athletes are the starting point of all our work, and all our work is based on what athletes think. In addition to being competitive, the Winter Paralympics is fundamentally more of a It is a symbol of humanism, so we need to reflect humanistic care in more details in the service guarantee."

Humanistic care and attention to detail are the guarantee and service concepts of the Winter Paralympic Village.

How are the details reflected?

The first thing to do is to be careful.

Before opening the village, the relevant staff and volunteers were carefully trained, and the security check was one of the key points of the training.

Service should be attentive and moderate.

Barrier-free ramps are set up at the security exit to facilitate wheelchair access. At this time, if you want to help push the wheelchair, you must observe carefully before taking action.

Many Paralympic athletes have physical and visual impairments.

As the home of some athletes and team officials during the Winter Paralympic Games, in the Yanqing Winter Paralympic Village, "starting with the details" is reflected in all aspects, not only the service is extremely attentive, but also the various barrier-free facilities in food, accommodation and transportation are also considerate and meticulous The special needs of everyone are catered for.

Barrier-free facilities should be convenient and safe.

Details determine success or failure, as small as the opening and closing of a bathroom door, the staff have made careful design.

In addition to the many pre-built barrier-free facilities such as thresholds and door handles, after the Olympic athletes left, some upgrades and adjustments were made to the rooms they want to stay in according to the characteristics of the athletes with physical disabilities. The movable handle next to it is newly installed.

Yan Han, secretary general of the Yanqing Winter Olympic Village (Winter Paralympic Village), said: "After pulling the handle down, the two handles have a space of 75 to 80 centimeters for easy docking with wheelchairs. Athletes can hold the handle and turn it around to use the toilet."

Not only the bathroom, but also the heights of commonly used facilities such as beds, hangers, wardrobes, mirrors, etc. have also been reduced in a targeted manner.

Taking the bed as an example, it is 10 cm lower than that of the athletes during the Winter Olympics. Although it is only a small adjustment, it brings great convenience to the Winter Paralympic athletes.

In the Winter Paralympic Village, everything is people-oriented, not only in the accommodation rooms, but also in the restaurant, which reflects the careful and meticulous service guarantee.

The restaurant of the Winter Paralympics was originally the restaurant during the Winter Olympics. In order to facilitate the entry and exit and dining of wheelchair athletes, the table and chair placement, the overall space, including the height of the table, etc., have also been modified and adapted one by one. convert.

A Braille menu is also prepared for visually impaired athletes.

"Starting with details" requires not only carefulness and meticulousness, but also professionalism.

In the Winter Paralympics, competition injuries and daily accidents may cause problems with wheelchairs and prosthetics. In this case, timely and professional care and maintenance of prosthetics, wheelchairs and other equipment is very important.

To this end, the Winter Paralympic Village has specially set up a wheelchair and prosthetic limb repair service center, and hired a professional company that has served many Paralympic Games to provide professional and personalized services to athletes.

Cheng Hong said: "For disabled athletes, it is not necessarily a good thing to have a lot of on-site services and on-site personnel. What they need most is to be able to freely enjoy the relevant facilities and equipment in our village without human help, so that the silent waiters can freely enjoy the facilities and equipment in our village. To help the athletes live freely in the village."

The "hardware" has been upgraded and the "software" has been optimized. The Winter Paralympic Village's meticulous guarantees and services have warmed the village's athletes and officials of the International Paralympic Organizing Committee.

However, in the Winter Paralympic ice hockey event, athletes need to ride on sleds throughout the competition.

In this case, there are many differences in the standard ice hockey rink requirements for the Paralympic and Winter Olympics.

On February 21, the second day after the closing of the Winter Olympics, the conversion work was quickly started here. The first thing to do in the stadium conversion is to thicken the ice surface.

Qi Liang, secretary general of the National Gymnasium, said: "The thickness should be increased from 3.5 cm to 4.5-5 cm. Because Paralympic athletes compete on sleds, one end of the sleigh is hit and the other is pointed. Assisted sliding to poke the ice, the tip is sharper, and if the ice surface is thinner, it is easy to poke the primer of the ice."

Not only the ice surface, but also for the athletes who need to ride the ice sled throughout the whole process. In the passage from the locker room to the competition venue, where these athletes are active, a 300-square-meter imitation ice board is specially added, which is convenient for the athletes who are sitting on the sled freely. in and out.

For sitting on the sled, the line of sight is also lower, and the board wall in the waiting area for athletes has also been replaced with a transparent board wall.

Pan Zhongmin, deputy media director of the National Gymnasium venue operation team, said: "Athletes should always pay attention to the changes on the field. Once they want to make a substitution, they will go out as soon as the door is opened, so this place must be transparent. The thickness of the ice is as high as the thickness of the ice surface, so it does not affect his going out."

In addition to taking into account the competition and preparations, after the competition, in order to facilitate the athletes to be interviewed by reporters, in the mixed news interview area, the original baffle was also lowered from 1.2 meters to 60 centimeters.

"Synchronous preparation, one post and two responsibilities", to create a barrier-free environment for the Winter Paralympics. As early as September 2018, the Beijing Winter Olympics Organizing Committee, the China Disabled Persons' Federation, the Beijing Municipal Government, and the Hebei Provincial Government jointly issued the "Beijing Winter Olympics". Accessibility Guidelines for the 2022 Winter Olympics and Paralympic Winter Games, which has also been approved by the International Paralympic Committee as a normative basis for the barrier-free construction of venues. In the process of construction, acceptance and review, ensure that the corresponding venues and facilities meet the operational requirements of the Winter Paralympic Games.

Yang Jinkui said: "I can confidently say that all our competition venues and non-competition venues, including 3 villages, our accessibility is 100% in accordance with the guidelines, we have done the work ahead, and the work during the transition period is not particularly large. China It is ready, Beijing and Zhangjiakou are ready, the organizing committee is ready, we are all ready, I hope you come, we will present a simple, safe and wonderful event."

This is because long before the opening of the Beijing Winter Olympics, the Paralympic Department of the Beijing Winter Olympics Organizing Committee, together with various departments, has conducted a review of all procedures involving disabled athletes and rooms that may use barrier-free facilities. The details have been checked one by one for several rounds, and the Winter Paralympic test competition has been successfully held. It can be said that they are confident.