“Must learn from the best”: Medvedev will play with Nadal on Saturday, and on Monday he will become the first racket of the world

Daniil Medvedev reached the semi-finals of the ATP tournament in Acapulco, where he will meet with Rafael Nadal and try to take revenge for the defeat in the decisive match of the Australian Open. Regardless of the outcome of the confrontation, the Russian will bypass Novak Djokovic, who sensationally lost in Dubai to the Czech Jiri Vesely, and will become the first racket of the world. Previously, domestic athletes only twice led the ATP rating. Yevgeny Kafelnikov and Marat Safin succeeded in this. 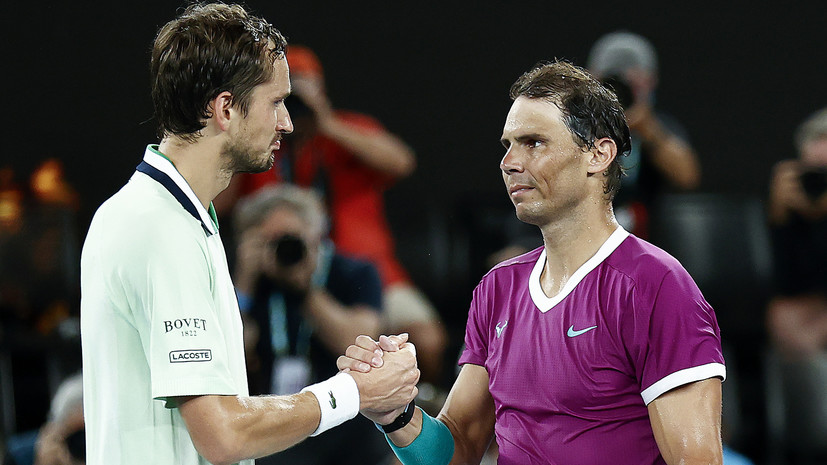 Russian tennis player Daniil Medvedev on Saturday, February 26, in the semi-finals of the ATP-500 tournament in Acapulco will meet with Rafael Nadal, who did not allow him to win the Australian Open at the beginning of the year.

The Spaniard then won an incredibly dramatic final that lasted more than five hours, and set a unique achievement - he won the 21st Grand Slam title.

In Mexico, the Russian has a great opportunity to take revenge for the insulting defeat that did not allow him to secure first place in the world ranking back in January.

As the athlete noted, for him every meeting with Rafael is an opportunity to learn something new.

“Playing with Nadal is always something special.

Kind of a chance to get revenge.

I have to learn from the best, that is, from Rafael, Roger, Novak, Andy.

Whenever they lost in a tough match, they tried to take revenge.

This is what I will try to do when I play with Nadal, ”the ATP official website quotes Medvedev as saying.

It should be noted that the Spaniard is a very uncomfortable opponent for Daniel.

Tennis players have met on the court five times already, and only once the Russian was able to win: in 2020 in the semifinals of the ATP tournament in London.

At the same time, almost all the fights turned out to be difficult, especially the two Grand Slam finals - in Australia and the USA.

However, Medvedev is only getting stronger with each match, and in Mexico, as in Melbourne a month ago, he will be the favorite of the face-to-face confrontation.

This is well understood by Nadal himself.

In the ATP commentary, he stressed how difficult it is for him to play against a domestic athlete.

“You have to play at the highest level to have a chance to win.

This is what I'm going to do.

I have to play my game.

Everyone knows how difficult the final was in Australia.

Tomorrow there will be another battle.

I know he plays well… I look forward to this match,” said Rafael.

To give positive emotions and self-confidence to Medvedev should be the news that on Monday he will finally become the first racket of the world.

A dream turned into reality after Djokovic lost sensationally in the quarter-finals in Dubai.

Moreover, the opponent of the Serb was not the most serious - the 123rd number in the rating of Jiri Vesely.

He made it to the main draw through the qualifiers, but then created several sensations: first he defeated the 2014 US Open champion Marin Cilic, and then one of last week's winners, Roberto Bautista-Aguta.

Could not beat the Czech and Novak.

The stumbling block was the powerful pitch of the opponent, with which the first seed of the tournament did not figure out how to cope.

According to the President of the Russian Tennis Federation Shamil Tarpishchev, Jiri is a very uncomfortable opponent for Novak.

He has defeated a Serbian before, in particular at the Masters in Monte Carlo in 2016.

“Although he is a veteran of Czech tennis, he has already won against Djokovic.

Jiri is tall, left-handed, serves well and breaks the game, does not allow him to act calmly on the court.

For Novak, this is not the main tournament.

He played without tension, freely and easily.

Luck was a little on the side of the Czech.

But in terms of the quality of the game, everything was good, ”Tarpishchev quotes the Championship.

After the match, Djokovic commented in one word on the fact that Medvedev had beaten him in the world rankings.

he said at a press conference.

And later he published a post on Instagram, where he made it clear that the Russian deserved the title of the first racket of the world.

Daniel himself learned the good news when congratulations began to come to him.

Among those who wrote to the tennis player was Tarpishchev.

“What did you write?

I’ll even read it: “You are already a legend.

I appreciate, respect and love as a Man with a capital letter.

- and put three smiling emoticons, ”said the head of the FTR.

Messages and calls rained down on the Russian just before his quarterfinals with the Japanese Yoshihito Nishioka.

As the athlete admitted, after that it was difficult to tune in to the meeting.

“The number one goal for me was still to win today because I try to win every match I play.

But this is definitely great news, ”Medvedev admitted.

The Russian coped with emotions perfectly well, he defeated the Japanese with a score of 6:2, 6:3 and now he will meet with Nadal in almost a new status.

The representative of Russia for the first time since 2012 will become the first racket of the world in singles.

The last time the rating was headed by Maria Sharapova.

If we talk only about men, then Medvedev is only the third Russian at the head of the ATP rating after Yevgeny Kafelnikov and Marat Safin.

He will also be the first player to be number one since February 1, 2004, outside of the Big Four (Federer, Nadal, Djokovic and Murray).