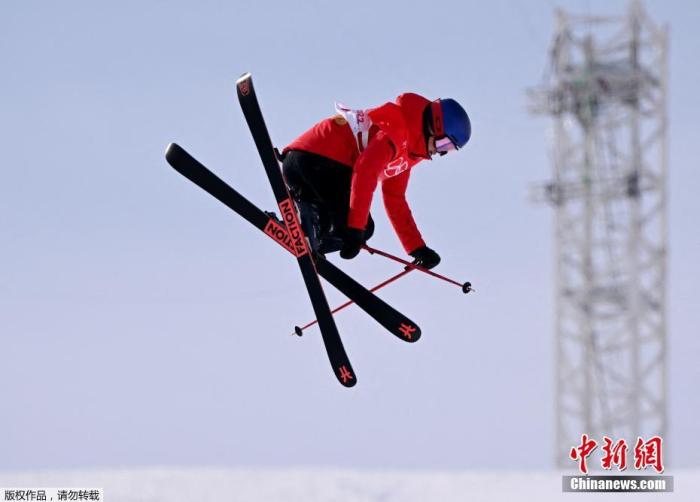 China News Agency, Beijing, February 17 (Reporter Wang Zumin) The Beijing Winter Olympics on the 18th will produce four gold medals, one of the three days with the fewest gold medals after the opening of the Winter Olympics.

But the Chinese Legion has a lot to watch. It will not only compete for gold on the snow and ice, but also start a pair skating championship journey in the figure skating arena.

The picture shows Gu Ailing in the game.

This year's Winter Olympics, the Chinese team teenager Gu Ailing, who also has 3 events, will usher in her last and strongest final duel.

The 18-year-old is a real king on the freestyle U-shaped course—she's the new champion at the World Championships and has swept all the gold medals in her four World Cup races this season.

In the freestyle skiing U-shaped field skills qualifying competition held on the 17th, Gu Ailing explained what absolute strength is: she ranked first with 93.75 points in the first round, and was the only player who scored more than 90 points.

In the second round, with no opponent, she defeated herself again and refreshed her previous round with a score of 95.50.

The only two high scores of more than 90 points in the audience were labeled "Gu Ailing" by her.

In the first two final battles, Gu Ailing has won 1 gold and 1 silver.

She once said that her biggest wish for this Winter Olympics is to be on the podium three times.

For her, this wish should not be difficult to achieve.

What is even more gratifying is that, unlike the previous two finals, where Gu Ailing fought alone, three players from the Chinese team advanced to the peak of the freestyle skiing U-shaped field.

In addition to Gu Ailing, 19-year-old Zhang Kexin and 18-year-old Li Fanghui advanced to the fifth and seventh place in the qualifying round respectively, showing their strengths that cannot be underestimated.

The "post-00" women's team of the Chinese team is expected to bring more surprises in the finals.

The men's 1000m final will be held on the 18th in the speed skating arena. Chinese players Ning Zhongyan and Lian Ziwen will play together.

In the men's 1000m and 1500m speed skating, the Chinese team was in a relatively backward position.

At the PyeongChang Winter Olympics, Chinese players ranked around 30 in both events.

However, in recent years, Ning Zhongyan, a quasi-post-00s generation, has come to the fore, quickly narrowing the gap between the Chinese team and the world level in these two projects.

In the men's 1500-meter final held recently, Ning Zhongyan won the seventh place. Although he created the best record of the Chinese team in the Winter Olympics in this event, it was far from Ning Zhongyan's expectations for himself.

He expressed "dissatisfaction" after the game, believing that he did not play his normal level.

This time to participate in the 1000-meter final, I hope he can leave no regrets.

In this Olympic cycle, Gao Tingyu and Ning Zhongyan are known as the "twin stars" of Chinese speed skating for their outstanding performance.

In the 1000m final, can Ning Zhongyan further define "Gemini" with a medal or even a gold medal?

Figure skating pair skating kicks off, and will take the lead in the short program contest on the 18th.

In this Olympic cycle, all the efforts of the Chinese pair are to make up for the regret of the 0.43 point difference at home.

This season, they have won consecutive World Cup championships. In the team competition of this Winter Olympics, they played in the pair skating short program and ranked first in the event with the highest score of the season.

A total of 19 pairs of players will compete in the pair skating short program, and the top 16 players will advance to the free skating on the 19th.

Women's curling will be in the semi-finals, with Sweden and England, Switzerland and Japan competing for the final qualification on the closing day.

The men's ice hockey semifinals will be between Finland and Slovakia, and the Russian Olympic Committee and Sweden.