Real Madrid takes a good suffocation before the courage of Breogán

The Cup as a turning point, as a fix for all the ills of late. That lost paradise intends to reconquer a suddenly hesitant Real Madrid, dismounted... 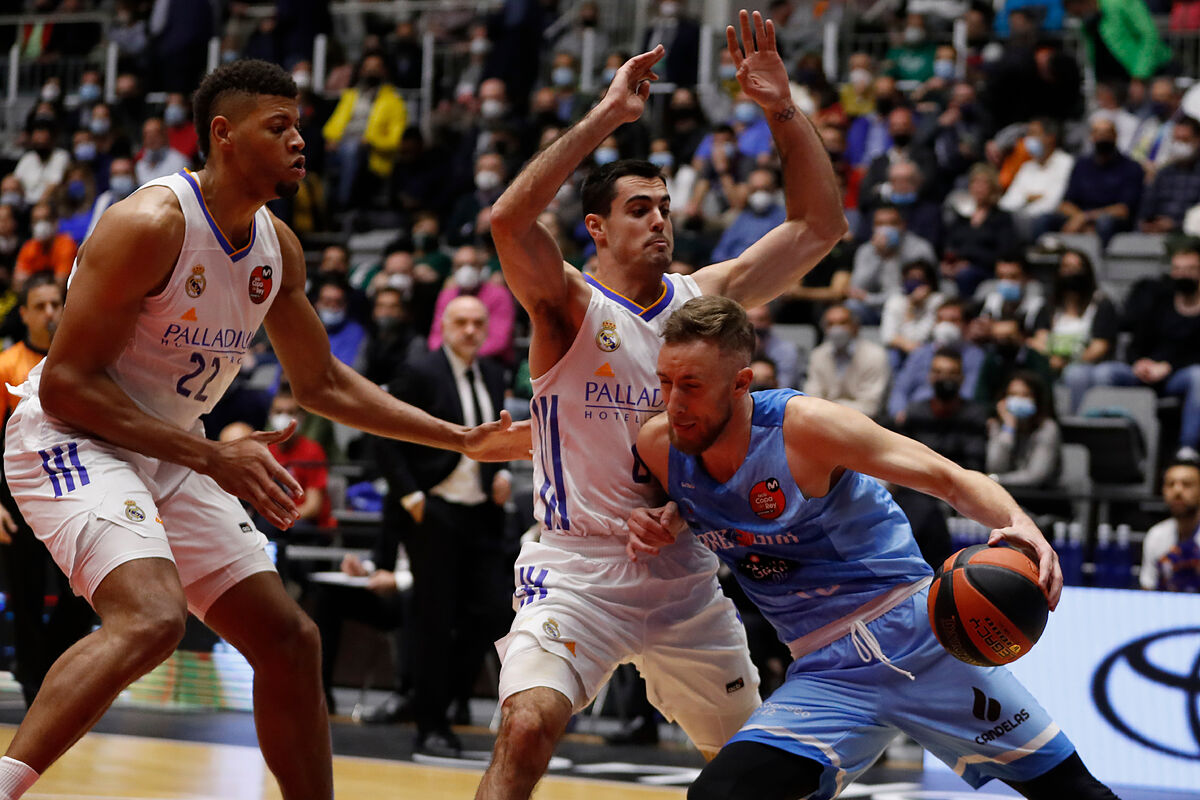 The Cup as a turning point, as a fix for all the ills of late.

That lost paradise aims to reconquer a suddenly hesitant Real Madrid, dislodged by its attacks against Barça, for this exhausting winter.

But, to begin with, more doubts, a good hot flash in the quarterfinals against the modest Río Breogán, who was about to star in a feat.

Because it was a thick Madrid, in fits and starts, with just the flashes of

, by far the best of the night.

A beautiful basket by the Frenchman, after 10 assists, ended Lugo's dream almost on the shore, a sigh of relief at the tragedy that for a moment surrounded

Those ghosts of the defeats of recent weeks flying over Granada.

And that the first half had not made suspect such sweats.

Without boasting, a Madrid of solidity and defense dawned, recovering its good habits, drawing on experience.

All the momentum, all the illusion of the newly promoted present in the Cup, crashed squarely with the immensity of

The giant conditions too much, which makes any good proposal difficult.

He was the difference and that the Galicians were going to achieve until they dominated the rebound.

The start of the Breogán was a I want and I can't, refugees in the genius

He was going to make her night bitter.

Meanwhile, Madrid took off based on triples by

It was difficult for Breogán to land in the tournament, for that beautiful story that Lugo writes in national basketball.

Despite the bad start (16-3), he looked for all the ways to honor the tournament.

He took a breath, planted a zone, made it difficult for a superior but not entirely fine Madrid, who could not count on

Rudy or Deck and who left

, who returned from injury)

out of the call due to quotas .

Heurtel shared the game, decisive despite his moles, Abalde was a beast and Breogán lacked an offensive point.

And then Yabusele, who this time put on his boots from the perimeter.

To his repertoire, which only gets darker in the games against Barça, he added the triples to unravel the good intentions of the rivals.

The Galician resistance seemed to break in the middle of the third act, the following white acceleration.

put the maximum (56-41), when Heurtel sat down to catch his breath,

in the paint and a three-pointer by

Again the recurring white arbitration entanglements, almost always a symptom of his weaknesses.

Madrid took a breather with a three-pointer by

, but the film was already terrifying.

When Tavares sat down with four fouls, he brought Breogán closer with two baskets from

Mahalbasic, a titan from Austria

But Tavares returned and order returned.

On the finish line, he no longer had a kidney injury to Breogán.

A technique to Mrsic ended all his options, with a too beautiful dream.