Comprehensive news: Su Yiminggu Ailing wears gold and silver in China to refresh her best record in the Winter Olympics 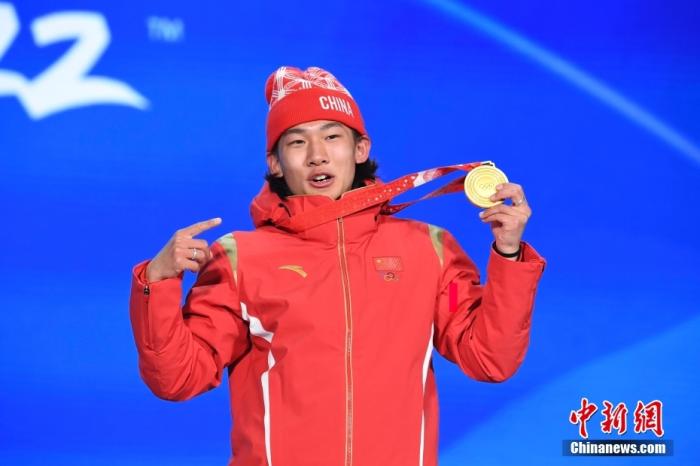 China News Agency, Beijing, February 15 (Reporter Wang Zumin) In the Lantern Festival, which symbolizes a complete and prosperous Lantern Festival, the Chinese delegation also received the most complete and prosperous transcript-with two teenagers Su Yiming and Gu Ailing on the 15th With one gold and one silver contribution, the Chinese delegation has won 6 gold medals in this Winter Olympics, and the number of medals has increased to 12 (6 gold, 4 silver and 2 bronze). best result.

In the snowboard big jumping final on the 15th, Su Yiming, who has won the silver medal in the snowboard slope obstacle skills at the Winter Olympics, appeared again.

With his excellent performance in the first two rounds, Su Yiming became the veritable champion in this "Flying Trapeze" battle with a high score of 182.50.

The picture shows Su Yiming at the award ceremony.

February 18 is Su Yiming's 18th birthday. This gold medal has not only become the most perfect coming-of-age ceremony for this teenager, but also marked China's youngest Winter Olympic champion.

The freestyle skiing women's slope obstacle skills final, which started the first day, also ushered in the re-appearance of a new Chinese star - Gu Ailing, who has won the gold medal in the women's freestyle skiing platform jump, withstood the pressure when she made a mistake in the second jump. With the perfect performance of the third jump, he won the silver medal.

At present, Su Yiming and Gu Ailing have each earned 1 gold and 1 silver. Su Yiming has ended his first Winter Olympics trip. Gu Ailing, who has 3 events in this Winter Olympics, will also participate in freestyle skiing on the 17th and 18th. Qualifiers and finals on U-shaped venues.

After the competition on the 15th, Gu Ailing said that her wish was to be on the podium in all three events.

On February 15, the awarding ceremony of the women's slope obstacle skills medals for the freestyle skiing of the Beijing 2022 Winter Olympics was held in the Zhangjiakou Division Awards Plaza.

In the snowboard women's big platform finals that day, 19-year-old Chinese teenager Jung won the fifth place, creating the best result for a Chinese player in the Winter Olympics in this event.

Austrian star Anna Gasser defended her title in this project.

In the qualifying match for this project held on the 16th, Qi Guangpu and Jia Zongyang, two veterans of the four dynasties, advanced strongly.

The picture shows Jia Zongyang in the game.

Unfortunately, the other two Chinese players Wang Xindi and Sun Jiaxu missed the final after two rounds of competition.

The National Speed ​​Skating Hall "Ice Ribbon" held the men's and women's team chase final on the 15th. Although the Chinese women's team missed the medal competition, in the women's C group final (the 5th place competition), they defeated the rival Norway team and won the 5th place. name, tying its best result in the Winter Olympics in this event.

The Chinese men's team lost to the Italian team in the Group D final, ranking eighth.

As expected, the Russian "Matryoshka" entered the top 4 of the short program. Among them, the 15-year-old Valieva, who was troubled by the doping incident, still occupies the top spot, and the famous Japanese player Sakamoto Hanori temporarily ranked third.

Alpine skiing is known as "the jewel in the crown of the Winter Olympics", and downhill is the fastest single event in alpine skiing. Not easy.

The Chinese men's and women's curling teams both lost on the 15th.

The women's team lost 5:11 to the Russian Olympic Committee. At present, they have 2 wins and 5 losses, and they have basically withdrawn from the top four.

The Chinese men's curling team lost to Canada 8:10 in a one-day double match, and then defeated Norway 8:6, with a total score of 3 wins and 5 losses, and there is basically no hope of advancing to the semi-finals.