Heung-Min Son · Hee-Chan Hwang in the EPL 'Korean Derby'... The match was won by Wolverhampton.

Son Heung-min started as Tottenham's left wing striker in the 25th round of the 2021-2022 EPL held at Tottenham Hotspur Stadium in London, England, and played until the end of the match. 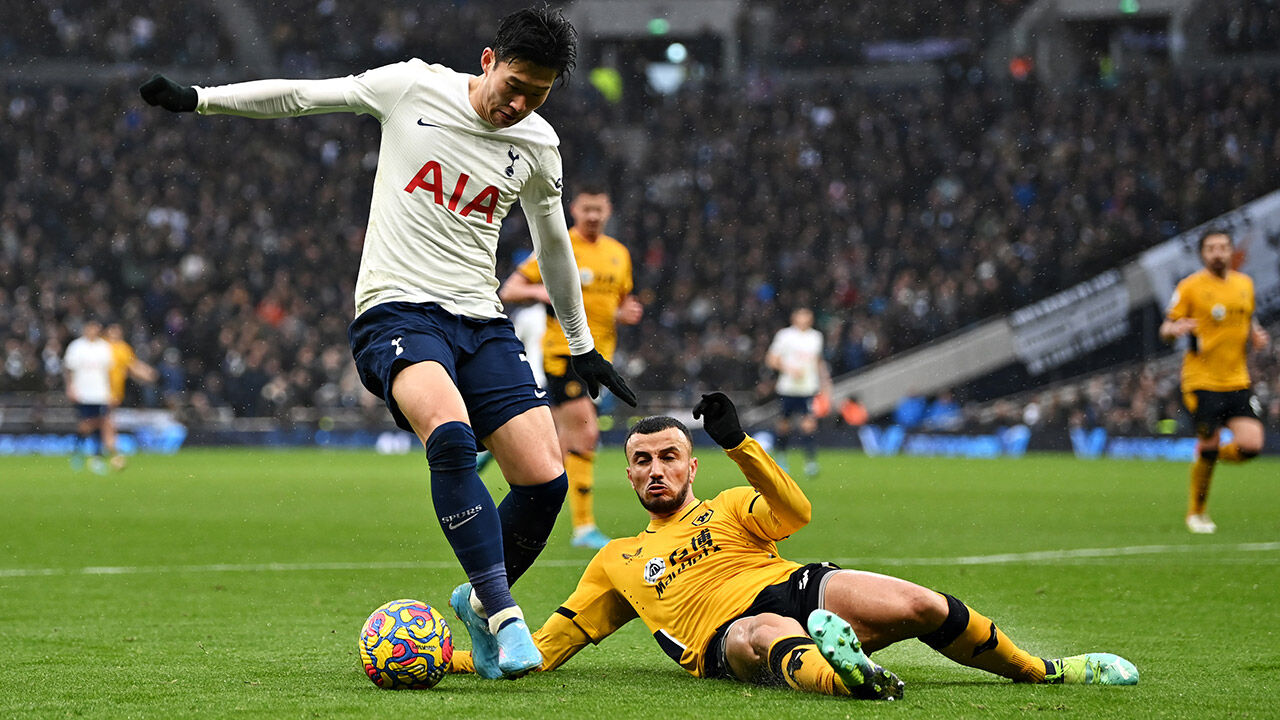 Son Heung-min started as Tottenham's left wing striker in the 25th round of the 2021-2022 EPL held at Tottenham Hotspur Stadium in London, England, and played until the end of the match.

After starting on the bench, Hwang Hee-chan stepped on the ground instead of Daniel Podens in the 36th minute of the second half and played 10 minutes until extra time.

Hwang Hee-chan, who suffered a hamstring injury during a regular league match against Brighton & Hove Albion on December 16 last year, made a comeback after two months.

With Hwang Hee-chan participating, the 'Korean Derby' was completed in 4 years in the EPL after Lee Cheong-yong (now Ulsan Hyundai) and Son Heung-min, who were members of Crystal Palace, met in February 2018.

Shortly after Hwang Hee-chan was loaned to Wolverhampton from Leipzig, Germany, in September last year, he had a match against Son Heung-min in the League Cup Round of 32, but this is the first time in the EPL.

Hwang Hee-chan signed a contract with Wolverhampton until 2026 at the end of last month while he was on a hiatus due to injury.

Neither Son Heung-Min nor Hwang Hee-Chan were able to raise their attacking points, but Wolverhampton won the match 2-0.

Before this match, Tottenham Hotspur were in 7th and Wolverhampton in 8th, but Wolverhampton added 3 points to get 37, replacing Tottenham (36 points), who have lost 3 league games in a row.

Wolverhampton opened the fire six minutes into the game.

Tottenham Hugo Loris goalie blocked both a mid-range shot from Hubeng Neves from the right side of the penalty arc and a right-footed shot from Leander Dendonker, but Raul Jimenez's chest was trapped and the ball hit the net with his right foot.

In the 16th minute of the first half, Son Heung-min received an exquisite kill pass from Rodrigo Bentancourt, penetrated the right side of the penalty area and aimed for an equalizer with a left-footed shot, but headed straight for Jose Sa's goalkeeper.

In the 18th minute of the first half, Wolverhampton scored one more goal after Tottenham showed a cluttered appearance including frequent passing mistakes amid the continuous rain.

In Wolverhampton's attack, which resulted from a pass mistake by Tottenham defender Ben Davis, a shot from the right side of the goal area was blocked by the defense and the post, but Dendonker finished it with his left foot in front of the post, making it two goals apart.

Tottenham took out Ryan Sessegnon in the 28th minute of the first half and replaced the transfer student Dejan Kulusevsky to make a comeback, but the first half ended without any income.

Tottenham Hotspur increased their possession of the ball in the second half and looked for an opportunity, but to no avail.

Heung-Min Son moved mainly from the right side after Lucas Moura was replaced by Stevan Bergwein in the 26th minute of the second half, but ended up being silent.

Wolverhampton, who conceded only 17 goals in the league this season, tied Tottenham with a tight defense, and in the 36th minute of the second half, he took out Fodence and put in Hwang Hee-chan, etc.

The best score for both teams was 8.1 by the goalkeeper.