Al Hilal fans celebrate their players despite the loss to Chelsea

The fans of the Saudi Al Hilal team set an example in encouraging his team during his team's confrontation with Chelsea, yesterday evening, in the semi-finals of the FIFA Club World Cup at Mohammed bin Zayed Stadium, which they lost with a clean goal, as they applauded for their players and waved the flags the moment they received a goal. 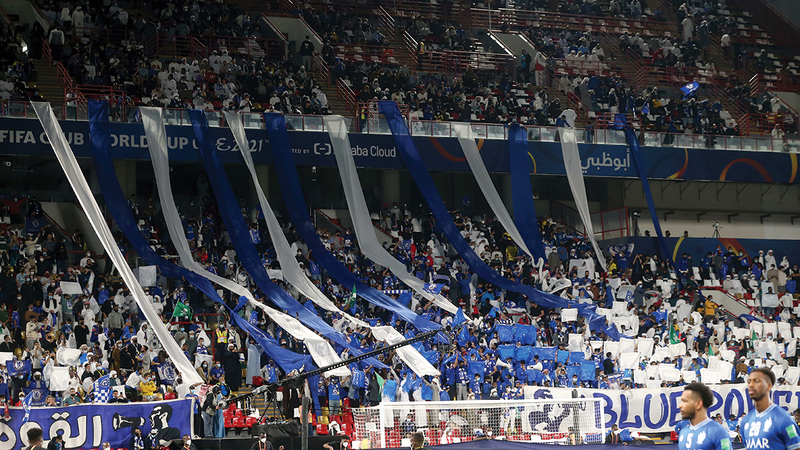 Al Hilal fans celebrate their players despite the loss to Chelsea

Al Hilal fans strongly supported her team on the field.

The fans of the Saudi Al Hilal team set an example in encouraging their team during their team’s confrontation with Chelsea, yesterday evening, in the semi-finals of the FIFA Club World Cup at Mohammed bin Zayed Stadium, which they lost with a clean goal, as they applauded for their players and waved the flags the moment they received their nets the only goal of the meeting. In the 32nd minute, in an attempt to support the players to continue to provide a distinguished performance.

The Crescent fans did not stop chanting their own chants, chanting the names of the players, continuous applause, interacting with the attacks and the goalkeeper Abdullah Al-Mayouf's saves, which had a clear positive impact on the players' performance, as it helped the team to cohesion quickly and restore confidence again and share the performance with the English team.

Al Hilal fans completed the second half of the match, standing in the stands, reacting to the course of events, especially as their team extended its control in an integrated manner, which prompted the "Blues" to retreat to the defensive areas clearly, keeping the ball between the feet of its players and relying on counter-attacks.

Thousands of Al Hilal fans arrived in the capital, Abu Dhabi, by air and land, to stand behind their team in its second historic participation in the World Championship, and the number of public attendance reached 19,175 fans, and the fans continued to enter even before the end of the first half, due to the crowding in all the roads leading to the stadium from an early age. .

After the end of the match, Al Hilal players roamed the stands to salute the fans who were behind them during the match, and some players threw their shirts to the fans who celebrated with them the level they presented, contrary to what was expected before the match.

The fans waited for a long time inside the stadium to take pictures on their mobile phones to immortalize the scene of the historic match that the team played in the international forum, while fans stood outside the stadium and continued to chant songs again, continuing to celebrate its players.

On the other hand, the crowd attendance of the Chelsea team was weak, as a small group came from Britain to support the team, while most of the attendance that encouraged Chelsea were fans of the team located in the country.

Contrary to the course of the match, goalkeeper Abdullah Al-Mayouf conceded the goal in the 32nd minute by Belgium's Romelu Lukaku, taking advantage of a defensive error during defender Yasser Al-Shahrani's attempt to return the ball to the goalkeeper, which is the only goal in the confrontation, to qualify Chelsea to face the Brazilian Palmeiras in the final next Saturday. .

Al Hilal, who is participating in the Club World Cup for the second time in its history, after winning the AFC Champions League last season, was a real match for Chelsea, and its players missed more than one chance to equalize and push the match into extra time, but the Spaniard Kepa Arrizabalaga, the team's goalkeeper, was brilliant The Londoner prevented this, especially after blocking several shots from the Saudi team's stars.

Chelsea, who are participating for the second time in the tournament, after winning the Champions League at the expense of their compatriot Manchester City in the final of the last edition of the competition, are seeking to win the Club World Cup for the first time.

The London team, which is currently ranked third in the English Premier League, lost to Brazil's Corinthians in the final of the 2012 World Cup hosted by Japan.

Chelsea also hopes to become the second English team to win the Club World Cup after Manchester United and Liverpool, who won the tournament in 2008 and 2019, respectively.

Chelsea is also looking to give European clubs its 14th title in the Club World Cup and the ninth in a row, after the old continent's teams have monopolized winning the tournament since the 2013 edition in Morocco.

Al-Hilal will play Al-Ahly of Egypt next Saturday to determine the third and fourth places. Al-Ahly of Egypt had lost to the Brazilian Palmeiras, the Libertadores Cup champion, the day before yesterday, in the other semi-final match, with a score of two goals without a response.

Mateo Kovacic man of the match

Chelsea player Mateo Kovacic was awarded the Man of the Match award, after his performance during the match, which helped his team reach the final.