Brazilian public clamor annoys Al-Ahly of Egypt. Crossing to the final is "forbidden"

The Brazilian Palmeiras team reached the FIFA Club World Cup final by defeating Al-Ahly of Egypt with two clean goals, yesterday, at Al Nahyan Stadium in the capital, Abu Dhabi, within the second round of the competition, to set the green team a date with the qualifier from today’s confrontation between Al Hilal Al-Saud. 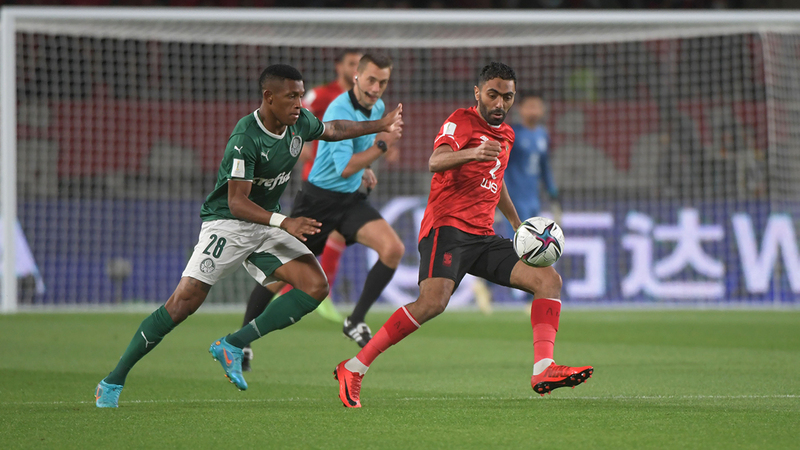 Palmeiras supporters attended in abundance in the stands..and supported strongly

Brazilian public clamor annoys Al-Ahly of Egypt. Crossing to the final is "forbidden"

The Brazilian Palmeiras team reached the FIFA Club World Cup final by defeating Al-Ahly of Egypt with two clean goals, yesterday, at Al Nahyan Stadium in the capital, Abu Dhabi, within the second round of the competition, to set the green team a date with the qualifiers from today's confrontation between Al Hilal Saudi Arabia and Chelsea of ​​England.

Palmeiras played the match driven by a huge fan base, as if in his stronghold the Allianz Parque Stadium in Sao Paulo, after his fans had reserved most of the Al Nahyan Stadium seats.

Al-Ahly players struggled throughout the two halves of the meeting to provide the level expected of them, but the weak focus on the defensive side reduced their risk.

Al-Ahly coach, Musimani, did not change the result in the second half, although it gave the team a different shape and offensive strength, but the team did not take advantage of the opportunities it had obtained, to lose the confrontation in favor of Palmeiras.

On the other hand, Palmeiras was the best party in most of the meeting, and snatched the advance goal in the 39th minute, after its player Rafael Vega broke the offside trap and singled out goalkeeper Ali Lotfi before putting the ball in the far corner, a goal that opened the team's appetite for scoring.

The Brazilian team doubled Al-Ahly’s suffering at the beginning of the second half, specifically in the 49th minute, when he added the second goal, which clearly reflected the lack of focus for the Egyptian team’s players, as the Palmeiras striker launched the ball from the midfield circle without any harassment, before entering the penalty area and scoring in The far corner also for the team to decide the pass to the final.

• Palmeiras will face Chelsea or Al Hilal in the final.

• Vega and Dodo scored the winning goals in the 39th and 49th minutes.

Chelsea, the European champion, seeks to avoid any surprise from its Saudi counterpart, Al Hilal, the Asian champion, in order to reach the final of the Club World Cup, in football, when they meet today (20:30) in the semi-finals at Mohammed bin Zayed Stadium.

The London club was disappointed in its first participation in 2012 and lost the final against Corinthians of Brazil, to be the only European champion who failed to crown the title in the last 14 years.

For his part, Al Hilal is also participating for the second time in the World Championship, and it reached the semi-finals in 2019 before losing 1-3 against Flamengo of Brazil, and finished fourth after losing the match for third place on penalties against Monterrey of Mexico.

While the European champions automatically participate in the semi-finals, Al Hilal had to go to the quarter-finals, sending a strong message to Chelsea with their wide victory over the host island 6-1.

Al-Jazira team hopes to achieve fifth place in the Club World Cup when it faces Mexico’s Monterrey at 17:30 this afternoon at Al Nahyan Stadium, in order to compensate for the great disappointment its fans received with the wide loss 1-6 at the hands of the Saudi Hilal in the second round match of the World Championship. At a time when the coach of the Mexican team, Javier Aguirre (formerly Al Wahda coach), is looking for victory to avoid possible dismissal.

There is no alternative for the players of "Pride of Abu Dhabi", and behind them their Dutch coach, Marcel Kaiser, for victory coupled with performance to clear the effects of the heavy defeat, as the team hoped to repeat the achievement of 2017 when it reached the golden square, but the wind came in this participation contrary to what the team wishes, on Despite his perfect start, he won the first match against Tahiti Pirai 4-1.