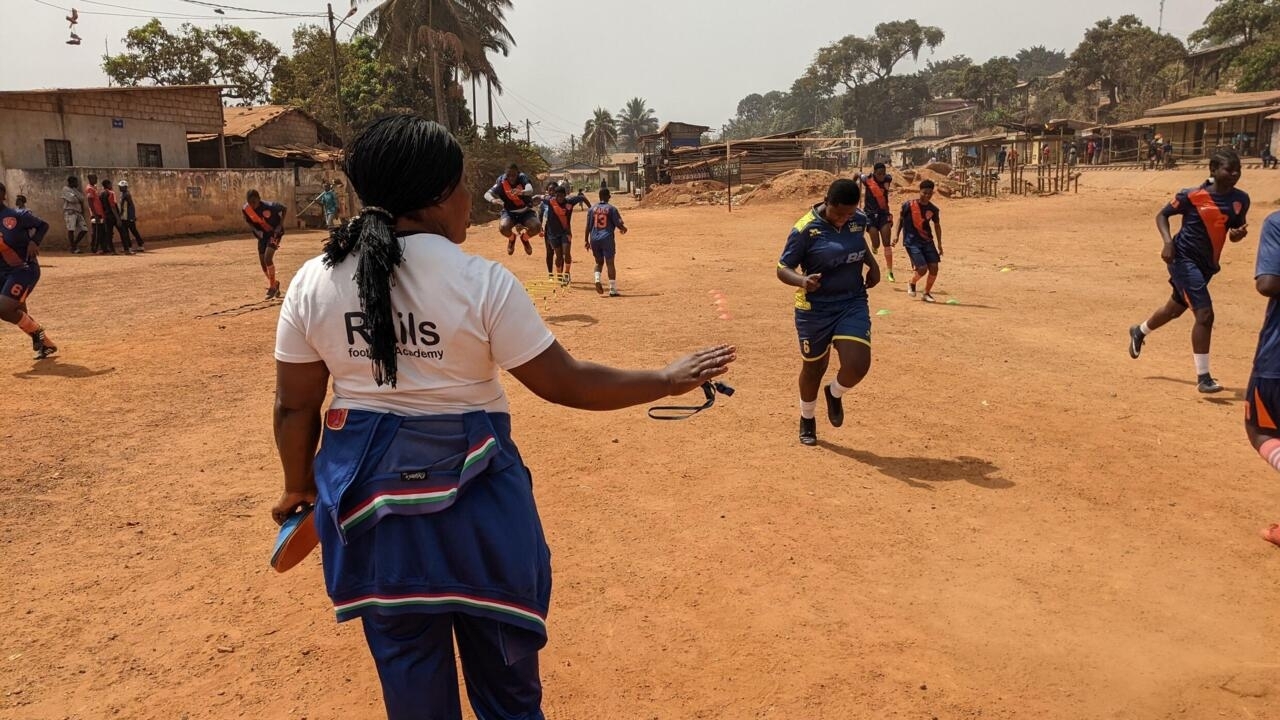 The terrain is rugged and the ocher earth dotted with gravel.

The well, located a few steps away, makes the place a very popular crossroads for the inhabitants of this district of Yaoundé.

It is here that Leslie, 14, begins to improvise a series of juggles, ball at the foot, quickly attracting a crowd of curious kids.

Quickly, a "toro", this universal passing game, is improvised.

It was in the streets of this popular district of Elig Edzoa, nicknamed Rails Manguier because of the railway that crosses it, that Leslie learned to play football.

She cut her teeth at the "Rails Football Academy", the first women's football school in Cameroon, created by the former indomitable lioness Gaëlle Enganamouit, African Golden Ball 2015, also from the neighborhood.

Leslie improvises a little juggling series in her neighborhood.

"I was born and raised at the Rails. I started playing on this same ground. Every time I came back to Cameroon, I went back there. I had to give something back to my younger sisters", explains Gaëlle Enganamouit, reached by telephone.

"It also shows that this neighborhood is not just a bad neighborhood, that good things are also happening there."

"She preferred the ball to the dolls"

Leslie is one of many talents who have joined the academy.

She goes twice a week to training, but, being a keen football fan, she takes every opportunity to practice.

She also admits to prefer to dress in football clothes rather than "as a girl", "like that, I am always ready if I am offered to play", she confides, in the middle of her colorful jerseys of the academy.

"Already when she was little, we noticed that she preferred the ball to dolls. When we picked her up from school, she was always kicking the ball," explains Jacques Manyo Bayard, Leslie's father. , pointing to the two pebbles that still serve as goals today, near the school.

Naturally shy and reserved, Leslie lights up with the ball when she joins her comrades on the official Rails Football Academy ground: a bumpy rectangle, with shops on one side, the rails on the other, without sidelines or nets in the goals.

A difficult terrain in the middle of the slums, but one where the founder herself has hardened herself.

For her, this environment is part of learning to become a professional player.

The trains pass right next to the field where the academicians play.

"Our particularity as Africans is the difficulty. If you manage to dribble and make good passes here, the day you play on grass, it will be very easy", explains Gaëlle Enganamouit.

"When a player becomes strong, you have to look at where he comes from to understand. It's this kind of pitch that makes great footballers. I've never seen a good player come out of beautiful pitches", confirms Angeline Marie Christine Gondio A Mbang, the technical director of the academy and coach of the first team.

Angeline directs the training sessions with an iron fist.

When she gives the order, the young girls comply, whether it's an exercise in motor skills, passes or even shots on goal.

She encourages all her players to work hard, while instilling in them the virtues of discipline.

"When they arrive at the stadium, they know what they have to do. They get dressed, they wait for me, they start juggling to warm up. I teach them my know-how. When you have these young girls in front of you, you have to show them the right way. If you are not disciplined, you cannot evolve", affirms the coach, who knew the high level of women at a time when it had no professional than the name.

This iron fist on the ground is also a velvet glove off it.

Close to her players, she encourages them to pursue their dream: "Be like Gaëlle" and make a career in women's football.

"I wanted to join Gaëlle's academy because I have always been a fan of the player. I really dream of a career. I love football so much that I even lack words. Currently, this means everything to me “, explains Beatrice Ngo Nlend, 19, who has been at the academy since it opened in 2019.

"My goal is to make a career as long as possible. I want to have Golden Balls, African or world. I want to prove that I can do something in women's football", outbids Michelle Ndjomo, 17 years old , who would see himself playing at PSG like another of his idols, Kadidiatou Diani.

Mélanie Eboa is a midfielder in the academy team.

"After the academy, I hope to reach the same level as the founder and win trophies. I would also like to create a school like her to train players," said 17-year-old Mélanie Eboa.

The hostility of families

Passionate about football since their childhood, all of them have had to fight against the prejudices that make football a sport for men, unsuitable for women.

To join the academy, they had to convince their families that they too could kick the ball.

"My mother was reluctant. She said that it distorted the girls and was afraid that I could not start a family. I answered her that football is a passion. I can exercise it and have children afterwards. I showed him the example of the American Alex Morgan, who has a daughter, a husband. Amandine Henry, too, has a husband", argues Michelle Ndjomo.

Leslie's father, a building technician, was also skeptical for a long time about his daughter's all-consuming passion.

"I don't like football. For me, it's not for women. A girl has to go to school and become a doctor or a lawyer. I was really hostile," he explains. who practiced running.

"But my cousin, my wife, my big sister told me to leave her: it's in her blood."

Leslie and her dad chat and joke before practice.

From now on, the father of the family is fully behind his daughter.

As soon as he can, he attends the matches and lives them at 100%, encouraging him and gesticulating on the edge of the field, even in training.

And it's thanks to the Rails Academy: "There are several factors that motivated me. Already the proximity, it avoided paying for transport. Then, the academy belongs to a player who comes from here, so we we are sure that she will teach them the best way to play football".

And to conclude: "I prefer her to be at the academy than to play everywhere with boys."

"In the neighborhood, the girls are better than the boys"

With the "Rails Football Academy", Gaëlle Enganamouit hopes to prevent young girls from experiencing the same difficulties as when they started.

She remembers having been embarrassed, sometimes, to evolve in a male universe, for example when, in the absence of jerseys, one of the two teams plays shirtless to differentiate themselves.

"You're never completely comfortable. The goal was therefore to offer the girls a framework where they can express themselves to each other", explains the former indomitable Lioness.

"When I see them, I am very happy. I had not been so well surrounded, like that between women."

Leslie also experienced the difficulties of evolving with the boys:

"The girls are more disciplined. The boys here, they push you to win. You want to cry but you can't. So we try to work on your physique in training".

"In the neighborhood, the girls are better than the boys. We work harder than them, we want to be world champions!" Enthused the 14-year-old girl.

Gaëlle Enganamouit and Angeline are aware that women's football has evolved since their beginnings.

International bodies, Fifa and CAF, have invested in the discipline which has gained in visibility and resources.

"There was real interest from the Cameroonian authorities after our first participation in the World Cup", in 2015, says Gaëlle Enganamouit.

Gaëlle Enganamouit during the 2015 World Cup.

The young girls of the "Rail Football Academy" thus benefit from training equipment, jerseys but also funds to cover transport costs to matches.

"We didn't experience that," regrets Angeline.

"We played without money, for fun. Our children must understand that they are seen by the whole world. We try to explain to them that they have a chance."

All hope to have the same opportunity as the former captain of their team, who went to study in the United States, this Promised Land of women's football.

But this "chance" offered by the academy remains fragile: in the absence of subsidies and patrons, it continues to depend on Gaëlle Enganamouit's own funds.

Find our report on the school of Brasseries

Because there is no shortage of projects at the "Rails Football Academy".

First, the creation of a boarding school so that girls can devote themselves to football and school, like the prestigious Brasseries football school for boys.

The two women also hope that the African Cup of Nations, organized in Cameroon, will benefit local women's football.

They hope to be able to use some training grounds renovated for the occasion, for example those of the nearby Ahmadou Ahidjo stadium.

The opportunity for the talented young girls from the football school to evolve on beautiful lawns, far from the stones of the neighborhood.

From the Rails district, Leslie walks towards her dream © Romain Houeix, France 24