“Only her youth confronted her.”

The national football team boosted its hopes of securing a place in the Asian playoffs for the first group of qualifiers for the World Cup "Qatar 2022", after its victory over Syria with two goals without a response, in the match that took place between them yesterday, at Al Maktoum Stadium in Dubai. Kanedo "44", and 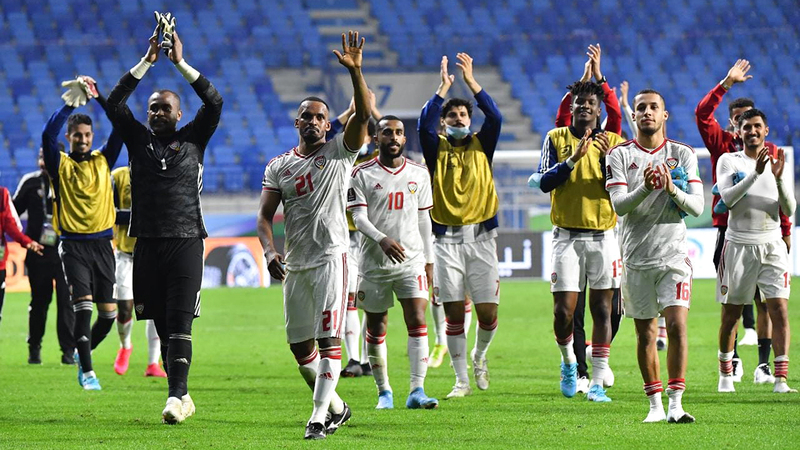 “Only her youth confronted her.”

The stars of the national team greet the small number of Emirati fans present in the stands.

The national football team boosted its hopes of securing a place in the Asian playoffs for the first group of qualifiers for the World Cup "Qatar 2022", after its victory over Syria with two goals without a response, in the match that took place between them yesterday, at Al Maktoum Stadium in Dubai.

The two goals of the meeting were scored by Caio Canedo (44) and Yahya Al-Ghasani (70), to raise Al-Abyad's score to nine points, four points ahead of fourth-placed Lebanon, which lost yesterday from South Korea with a goal without a response, while Syria remained at the last with only two points.

The UAE team succeeded in achieving victory, after all circumstances were against it before the confrontation against Syria, especially since the technical staff led by Dutchman Marvik summoned young players who were up to the responsibility, after fear possessed the public for the absence of important elements of the value of Ali Mabkhout, Lima, and Bandar Al Ahbabi, However, Caio and the rest of the young players restored the spirit to the white, and Caio managed ably with the group that Marvik pushed, scoring the first goal and making the second.

The players were surprised when they came to the Al Maktoum Stadium floor, in the absence of fans from the stands, unlike the Syrian fans, who attended in good numbers, and continued to encourage their team for most of the match.

Technically, Al-Abyad’s performance against Syria was the best for him during his qualifying career, especially from the defensive side, during which the quartet Abdulaziz Heikal, Walid Abbas, Muhammad Al-Attas and Mahmoud Khamis succeeded in completely eliminating the danger of the dangerous duo Omar Al-Soma and Omar Khribin, and did not They were rarely offensive.

Al-Abyad did not show a remarkable presence at the beginning of the match, although the Syrian team left him in the middle of the field to control it, and retreated to the back, relying on counter-attacks, but Al-Abyad did not invest this matter perfectly, despite the demand for a penalty kick after being obstructed. Abdullah Ramadan, to no avail.

The effectiveness of the white attack began to appear late in the first half, specifically at the 25th minute through Ali Saleh, who penetrated from the right side, and shot from inside the box, and the goalkeeper kept her away twice.

Then Caio missed the opportunity to put Al-Abyad in the lead, when he was alone with goalkeeper Ibrahim Alama, but he fell without contact from the Syrian defenders, but Caio managed on a second occasion to score from a cross ball distributed to him by Ibrahim Khalil, turning it with his head into the net the moment the Syrian goalkeeper exited his goal. by mistake.

The visiting team tried to press in the second half in order to adjust the result, and attacked with all its lines in the direction of Ali Khaseef's goal, who succeeded in his first real test, when he pushed Amr Jinnat's shot into a corner kick.

Omar Khribin reinforced the danger of the Syrian attacks with a header, and he is in a good position in front of the goal, but his ball passed close to the post.

Al-Abyad succeeded in investing on the counter-attack, as Yahya Al-Ghasani succeeded from his first touch in passing a long ball to Caio, who wanted to return the ball to him again, to put it with a magic touch in a confrontation with the goalkeeper, to put it easily into the net.

National team players score out of 10

• The quartet Heikal, Abbas, Al-Attas and Khamis completely eliminated the danger of the Syrian duo Al-Soma and Khribin.