Officially open the village! What are the "magic weapons" of the Winter Olympic Village in the three major competition areas? 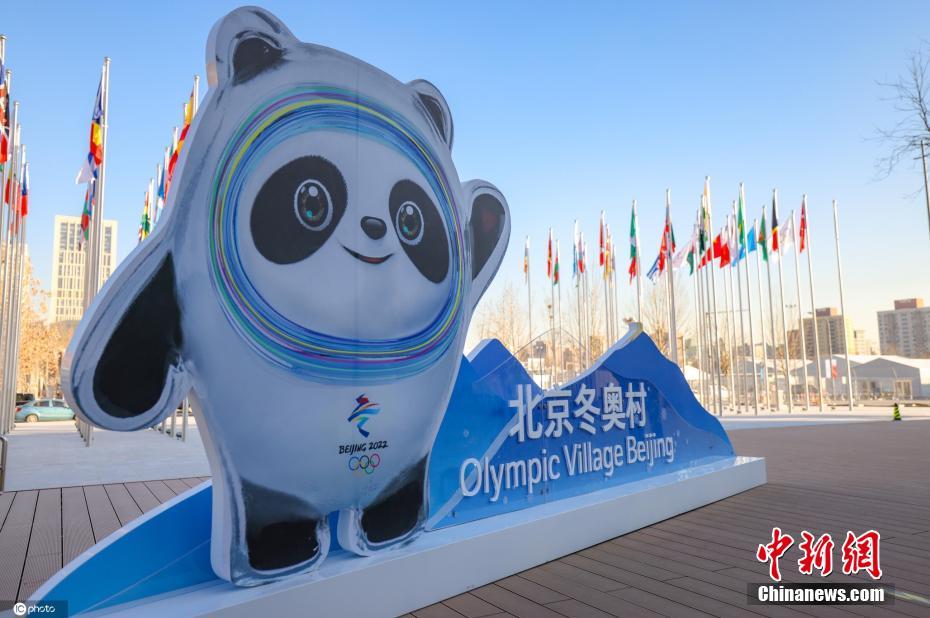 China News Service Client, Beijing, January 27 (Liu Xingchen) Since the pre-opening of the village, the fireworks in the buildings of the Beijing Winter Olympic Village wrapped in silver are getting thicker.

With luggage large and small, the advance teams of delegations from various countries and regions became the first "villagers" of the Winter Olympic Village.

The picture shows the square area of ​​the Beijing Winter Olympic Village in Beijing on January 16, 2022.

The first thing that catches your eye when you enter the Beijing Winter Olympic Village is a row of beautiful red brick buildings.

As the first stop for athletes, this place will undertake the functions of delegation registration, security check, protocol, media reception and other functions.

This area was renovated and renovated from 15 existing buildings of the original old factory, and it is also one of the infrastructure for the 2008 Beijing Olympics.

A clear "one-meter line" was set up on the ground, and signs such as road signs, "wear a mask" and "current limit" can be seen everywhere. Under the guidance of the staff, the registration process was carried out in an orderly manner.

After that, each delegation can go to the super service center in the residential area to pick up the room key and check in.

The Beijing Winter Olympics coincided with the Spring Festival. When white and red collided in the palette, shadow puppets, Chinese paper-cuts and other items containing traditional Chinese culture made the athletes' rooms feel a little more New Years, while the "Chinese style" It is also one of the outstanding features of the Beijing Winter Olympic Village.

In the Cultural China Exhibition and Experience Zone, the Organizing Committee selected nearly 300 intangible cultural heritage exhibits representing Beijing's unique cultural charm, such as the "Yanjing Eight Wonders" techniques, focusing on themes such as ice and snow, the Spring Festival and the Great Wall, showing the charm of traditional Chinese culture. .

Yanqing Winter Olympic Village: The Collision of Classic and Modern

Yanqing Winter Olympic Village, located at the foot of Xiaohaituo Mountain, can see snow and green trees complement each other at a glance.

The semi-open Chinese-style courtyards are built on the mountain, combining Chinese-style and international paradigms just right.

During the walk, a picture of a beautiful mountain village in northern China, where the mountains and rivers coexist harmoniously with the Winter Olympic venues, was displayed in front of everyone like a "paradise".

During the construction process, the trees protected in situ or transplanted and protected in ex situ include walnut catalpa, elm grandis, and martingale.

The trees and the Winter Olympic Village are integrated into a unique landscape.

The Spring Festival is approaching, the huge red building symbolizing auspiciousness stands in front of the Winter Olympic Village, and the flaming lanterns hang at the entrance of the traditional Chinese culture exhibition area...

The modern-style buildings are embellished with a little red. When China and the Winter Olympics are linked together, the profound historical heritage and the modern Olympic movement will present a wonderful event.

Walking about 500 meters north along the Taizicheng high-speed railway station, buildings with the characteristics of northern mountain dwellings appear in front of them, which is Zhangjiakou Winter Olympic Village.

From Beijing courtyard houses to rural courtyards, the "yard" is a common form of residential buildings in northern China. The integration of this element makes the Winter Olympic Village look patchwork.

In fact, "ingenious design, empowered by technology" is also one of the most commendable places in Zhangjiakou Winter Olympic Village.

The picture shows a room in an apartment in Zhangjiakou Winter Olympic Village.

Each room in the residential area is equipped with a smart door lock, which can be opened by fingerprint, password or card swiping; more than ten functions such as smart temperature adjustment system, fresh air system, smart infrared sensor, video intercom, etc., can be performed through the room controller. Operation; the smart bed with "memory function" is eye-catching. It is equipped with a remote control, which can be adjusted into different scenes such as sleeping and sitting positions, providing the best support for the spine.

In the dining section where there is a risk of people being cross-infected with the virus, the restaurant is equipped with intelligent heat preservation food cabinets to realize the diversion of people to eat.

In the main restaurant of athletes, there is a heat map display screen at the entrance to display the number of diners in real time, which is convenient for off-peak dining.

When "Technology Empowers the Winter Olympics" is no longer a slogan, with the help of "black technology", the Beijing Winter Olympics perfectly implements the "athlete-centered" Olympic concept.

With the official opening of the Winter Olympic Village, more and more guests will come from all over the world to gather in Beijing.

And the host who wrote the business card of "City of Two Olympics" is opening his arms to welcome all directions.

I hope that all those participating in the Winter Olympics can feel the warmth of home here and experience a safe, healthy and happy Winter Olympics!