Third day of the Monte Carlo rally. Then Oliver Solberg lost his grip in a curve and got stuck in a precipice. - That looked very strange. But it is not a dangerous departure, says SVT's expert Jonas Kruse. At the same time, Sébastien Ogier made a real jerk on the last stretch. 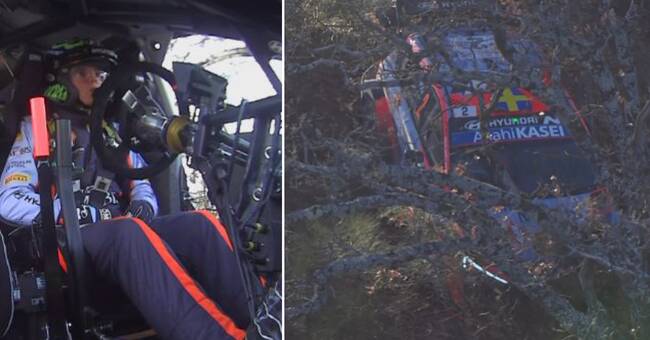 Shortly after the crash, however, Solberg and the map reader Elliott Edmondson, with the help of a nearby audience, managed to get on the road and complete the stretch.

- It has been a bad morning ... we did not need this, says a disappointed Oliver Solberg after passing the finish line.

- We have had quite a lot of smoke in the car all day and were quite dizzy.

But luckily there is no damage to the car.

See the crash in the player above.

Solberg was able to continue the race but had continued problems with exhaust fumes in the car and on the final stretch he had some incidents.

- We had a little boy punk and even drove into a snow bank, we were lucky there.

It was a very, very difficult stretch, says Solberg to WRC TV at the last stretch of the day.

Solberg lost a lot of time after the departure and is far down in the results list.

At the top, Sébastien Ogier made a real move towards victory on the last leg.

And this is partly due to the fact that he copied rival Sébastien Loeb's tire choice by driving slicks.

He extended the lead to 21.1 seconds.

- I wanted to drive with snow tires, it was probably the safest choice.

But then I saw that Séb went for slicks and then I changed quickly before the start, says a smiling Ogier.

Loeb could only realize the fact.

We tried, but Ogier saw it and he changed at the last minute.

That's okay, that's how it is, says Loeb.

The fastest on the route, however, was Kalle Rovanperä - with snow tires.

The ending directly on SVT

Third overall in the rally is the Irishman Craig Breen, barely a minute and a half behind Ogier.

The rally ends on Sunday with four distances.

SVT broadcasts SS15 in Play between 10-11 and the final powerstage in SVT2 / Play starting at 12.